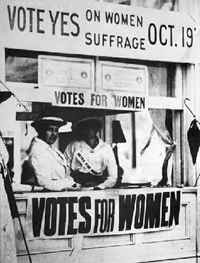 From the day the founding Fathers risked their liberty and life by signing the Declaration of Independence, there has been those who have wanted to sink this great ship called the United States of America. Well 143 years later the good ship America took a torpedo hit that at the time seemed like just another glancing blow. What many still consider the greatest step forward in equality for the sexes, was more then just a glancing blow however. It was in fact a deadly strike that entered the very heart of the ship and has been smoldering since. The damage caused by the 19th amendment was not noticeable at first, but after 90 years we can now see how complete the destruction was.

Thanks to the 19th amendment, we now have the same kind of Marxists running America that Ronald Reagan defeated from the Soviet Union. However the weapon of destruction used was not a nuclear warhead, no it was an emotional outburst that melted the brains of logic. On August 18, 2010 it will have been 90 years since the 19th amendment was ratified and became the law of the land. In those 90 years, America has gone from a God fearing Christian nation to a sadistic society that would make the founding fathers turn over in their graves. In my opinion, the icing on the cake was the day we witnessed Barack Obama getting elected President. So now we are confronted with the situation that almost every important issue facing the country comes down to an argument between an emotional feeling and a logical thought.

I use the contrasting difference between logic vs emotion because in our society today we are constantly confronted with situations that pit logic against emotions. I readily admit that throughout history mankind has struggled with properly defining the line separating logic and emotion when it comes to certain aspects of life. However, we now live in a society that is almost completely ruled by emotion. Case in point would be the parents in America that are routinely brought up on child abuse charges for spanking their children. When you raise a child it is logical and normal to slap their hands or spank their behind when they do bad things or act unruly in public. It is illogical and out of control emotions that lead to laws where such parental responsibility and Biblical teachings are now considered criminal acts of child abuse. It's my opinion that the blame for such emotionally out of control laws are a direct result of women getting the right to vote.

Now, I am not advocating that women should be barefoot, pregnant, and in the kitchen. Nor do I think that the 19th amendment should be overturned. I bring this up more as a logical analysis of what I consider to be the number one cause of our current troubles in America today. Besides, even if I were to advocate the repealing of the 19th amendment, it would be easier to hold back the waters of the Nile. I also admit that there are many women who think more rational and logical then some men do, just compare Barney Frank to Ann Coulter. Consider for a moment, one of the biggest political blunders that led to our current economic malaise. You must conclude that it is simply illogical to destroy the housing market and the country so that some disadvantaged minorities can live in a house they cannot afford. Now I am not laying all the blame at the feet of Barney Frank and his cohorts in congress, but I do lay most it there, and trust me, it was not logical thinking individuals who elected them to congress.

From the beginning of time women have been the emotional nurturers of society while men have been the logical protectors and managers. It was the men who had to do the dirty deeds that required more logic then emotion. Men have always debated and discussed what it is they thought was best for their families and communities, but there was usually a strong women standing behind and supporting them. It was this behind the scene interaction between husbands and wives that helped men see the emotional side of things. However when it came time for the tough decisions women understood that the ultimate course the men took was best for them, the community, and the nation because they would do what logically made sense.

There was a slow and methodical thought process that men used to allowed for the orderly progression of laws that, for most part, worked. This is not to say that men never acted irrationally or got overly emotional about the issues. After all, I admit that many wars in history were started for irrational and emotional reasons. Which only supports my opinion that overly emotional thinking individuals, like women, should never have been given the ability to make political decisions like who will represent the people in the government, or for that matter what policies and initiatives will be enacted into law. Unfortunately men eventually abdicated their God given responsibility and allowed their ......

(Excerpt)Read the rest of the article at...The Way One Vike Sees It

TOPICS: Chit/Chat; Education; Government; Politics
KEYWORDS: 19thamendment; 3rdrailpolitics; feminism; suffrage Navigation: use the links below to view more comments.
first 1-20, 21-40, 41-60, 61-69 next last
OneVike strikes again. This is something many have said but few have dared to write an article about.

This is a real long read, but it's an easy read, and if you read the whole article you will see that he really does a good job of making his point.

I think he is correct, although I am sure there are those of you who would say it was actually the 17th amendment that did the worse damage. I heard someone say once that if it were not for the 17th, then the 19th never would have even been considered in the first place. I disagree though, because I think the time was ripe for the 19th regardless of the 17th.

Think about this, once the women saw that the blacks had equal rights, they wanted the same and it was just a matter of time. The article somewhat touches on that at the end of it.

Either way, this should drum up a good debate.

OneVike asked me to post his article and ping his list. He is out of commission for a week. It seems that one of his brothers had a heart attack and he had to go back home to Minnesota for a spell. I guess he said he wrote this last year but then changed some things in it and asked me to post it. You must admit he does not shy away from controversy. Remember, I am just the messenger so don't shoot me if anyone gets offended by his article.

So you think 50% of the population should be treated as 2nd class citizens without the right to vote? This man thinks that view is about the most idiotic one I have ever seen on FR.

IIRC, all of the Marxists and Fascist takeovers of nations were led by men as opposed to women.

No. The beginning was the 16th.

4 posted on 03/03/2010 7:21:31 AM PST by pgyanke (You have no "rights" that require an involuntary burden on another person. Period. - MrB)
[ Post Reply | Private Reply | To 1 | View Replies]
To: Tom Hawks
Personally, I think this is the sort of idea that could marginalize conservatives.

Politics rarely deals with facts. If you want fact, explore engineering. Politics is about opinions. And there is no way that 300 million Americans are going to form the opinion that women should be disenfranchised.

I won't state my personal opinion (because it doesn't matter) but I will say that since this event isn't going to happen, we can only look foolish if we say, "Maybe it oughta!"

Otherwise, they will just vote for more largesse for themselves, the heck with the country.

Women don’t vote in Saudi Arabia. How is that working out?

All the women I’ve known have been totally liberal Dems, except for one. And my best friend found her first, and married her!

No it shouldn’t. No man with an ounce of self-preservation should touch this a ten-meter pole.

That is the right way to handle things.
No representation without taxation.

He is wrong. It began years before when Woodrow Wilson was elected. Look at all the crap we got under him and his progressive congress; the Federal Reserve, the income tax, the 17th, 18th, and 19th Amendments.

Dumbass females put Hussein in office. So was giving them the right to vote a mistake? Well GEE...LET ME THINK....

Actually what I meant was the 14the that might have been what my friends said. Wasn’t it the 14th that said you did not need to own property to vote?

Anyway, I am amazed at how many are just reading the portion of the article that is posted here. If they went and read the whole article they would see he is not advocating that they should lose their right, but just making his point of why it was a real bad one in hi view.

Well, maybe. But, it is not just the 19th Amendment, perhaps not even primarily. A lot has to do with population. After the Civil War, the population of the U.S. was heavily tilted toward women for awhile because of the number of dead soldiers. Social policies and attitudes changed, and not merely from voting rights. The same thing happened in Britain after WWI, albeit with the vote, too, when 1/3 of all men of college age were killed. Women wanted to be taken care of. Thus, the road to British socialism. Today’s American parallels can be seen in other ways: (1) a college population with is now more than 51% female; (2) a huge increase in the number of single mothers.

You are just as bad as the Muslims!

I am a woman who is both logical and emotional. I can argue without men, there would be NO rapes and No murders. What has brought this country down is liberal thinking, not female thinking.

Man, it is thinking like yours that deserves the camps Hitler provided!

Couldn't agree more. Only caveat is Military Veterans (disabled or otherwise) out with an Honorable, they should not be held to the "taxes to vote" thing.

so what do you say about the egalitarian persuasion that was prevalent as OneVike mentioned in his article?

You don’t think that had a lot to do with the mindset of the time also as he pointed out in his article?

18 posted on 03/03/2010 7:44:17 AM PST by Tom Hawks
[ Post Reply | Private Reply | To 15 | View Replies]
To: Tom Hawks
It is sad but true that women are natural liberals. It seems that they have to assure that they have the government and/or a man to look after their needs. It is a bunch of hooey that women wanted equal rights. They wanted extra rights.

I am a woman and I have told people for years that I would give up my right to vote if all women had to give up their right to vote. That is an absolute no-brainer to me.

That's not a nice thing to say about your Mother.