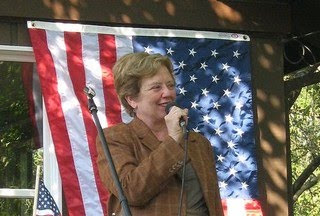 Evidence has emerged that in the early 1990s, Mary Jo Kilroy, then an Ohio lawyer and activist, was a member of the U.S.'s largest Marxist-based organization, Democratic Socialists of America (D.S.A.).

Furthermore, while running as a Democrat, Mary Jo Kilroy was backed by her D.S.A. comrades in her both unsuccessful (2006) and successful (2008) races for U.S. congress.

According to the D.S.A.'s newsletter - the Democratic Left, November/December 1992, page 9, the socialists did have one success in 1991. They elected D.S.A. member Mary Jo Kilroy to the local school board. 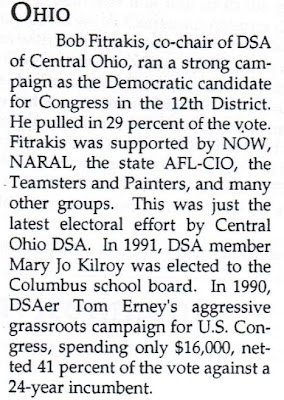 Kilroy was also named as a D.S.A. member in Democratic Left, July/August 1992, page 11, as part of a report on a D.S.A. National board meeting in Washington D.C.

Incidentally, the Paul Pinsky mentioned above is now a leftist Democrat leader in the Maryland State Senate.

The Center for Democratic Values, the think-tank project of Democratic Socialists of America, held its first national conference, "Arguing with the Right," November 6-7 1997 at the Clarion Hotel Columbus Ohio, in conjunction with the DSA national convention.

The conference will include historical and analytical sessions, plus skills workshops for contesting the Right's current dominance of American political discussion.

Trade was also an issue in the narrow loss of Mary Jo Kilroy to Deborah Pryce. Local DSAers worked in both the Brown and Kilroy campaigns

According to Democratic Left, Winter 2008, page 10

In Columbus, Ohio, DSA members campaigned for both Obama and congressional candidate Mary Jo Kilroy, who, after a suspenseful count of provisional ballots was declared the winner in December, raising the Democrats’ majority in the House to 257.

Is Mary Jo Kilroy yet another "DSAer Democrat"? Does she still owe allegiance to her old Marxist comrades?

The voters of Ohio surely deserve answers to these questions.

Kilroy is without question a far leftist. Her RINO opponent, Steve Stivers, will be a slight favorite in this rematch in November.

Kilroy is without question a far leftist. Her RINO opponent, Steve Stivers, will be a slight favorite in this rematch in November.

No. She is not a covert Socialist. She is an OVERT Socialist along with the rest of her entire damn Party.

Based on the news reports you cite, Kilroy is NOT a covert socialist.

If she identifies with the DSA, she is an overt socialist.

The communists have been busy infiltrating all levels of government while we have been out working in the private sector. Communists do not do well in private free enterprise. Unproductive government work is all they are good at. Thus the great divide. They have used our tax money to build a huge communist empire within the government. Now we are out of money to support both us and them at the same time. My question is which group can survive on its own? I could easily get by without them taking half of my pie. They however have no pie and can only survive by stealing my pie because I do not want to give them any more. I am going to hide my pie.

That’s called “Going Galt” around some of these parts. Problem is, socialists tend to get violent when too many people Go Galt. VERY violent. Does that mean don’t Go Galt? Nope. It just means be aware what’s coming once enough people do...

But socialism does indeed work -— for the ruling class it creates.

Yup, EXACTLY like junkies in need of a fix!

12 posted on 08/11/2010 9:15:06 AM PDT by piytar (Those who never learned that peace and freedom are rare will be taught by reality.)
[ Post Reply | Private Reply | To 11 | View Replies]
To: screaminsunshine
Unproductive government work is all they are good at.

Actually, they are not even good at that. It just happens to be the only place where they can work and get away with their views.

Sadly, they have found a home there and run the educational system into the ground and being the narcissistic fools that they are, they blame everybody else for their failures. Enough people not paying attention grant them power and they stay there for life.

It's time they are removed from such positions. America can no longer afford them. (We never could)