In an aggressive move to pull his campaign out of the trough after his Wednesday night debate performance, Gov. Rick Perry of Texas has effectively bought himself a chunk of the Fox News Channel, buying nearly $1 million of advertising time on the network.

A rival campaign that is monitoring advertising sales said Mr. Perry’s campaign had purchased $975,000 worth of advertising time on the channel, a huge amount for national cable television, ensuring that his ads will be seen up to seven times a day.

Romney, the former Massachusetts governor, recently recorded a TV campaign ad at a sheet-metal plant in Dubuque, in eastern Iowa. It’s not shocking that he would prepare such ads. But every Romney step in Iowa intrigues GOP activists." ----- ...."Romney has made only four public visits to Iowa this year. But a small core of advisers and staff keeps in close touch with key elements of the Iowa network he assembled in 2007."....

....Gingrich said Friday that he has remained in contention because he is running “probably the most substantive campaign in modern history” ------ ...."His schedule in the next 10 days shows him visiting the state to promote a movie he produced with his wife and participate in a multicandidate event aimed at social conservative activists."....

..." Facing voters for the first time since the allegations emerged, Cain met with tea party groups in Michigan. He hopes such friendly settings can help him retain the lofty perch he enjoyed in GOP polls two weeks ago.

“How you beat Obama? Beat him with a Cain!” he told one supporter at a crowded diner in Ypsilanti, near Detroit. The crowd cheered.

Cain is airing his first TV ad in Iowa. And he has hired a new lawyer, who is warning women they will be aggressively scrutinized for any charges made against the candidate...... 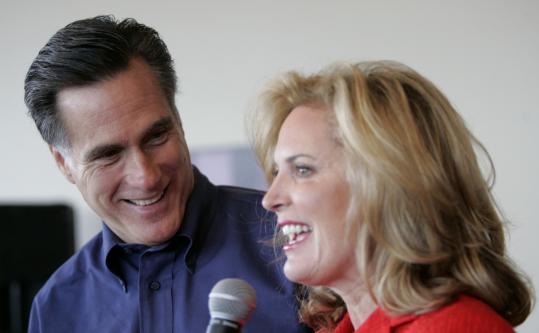 Look at all those racist Tea Partiers chasing after Cain!

Good, I like Perry and we could do a lot worse.

One can always rely on the GOP to do worse.

IF you'd rather NOT be pinged FReepmail me.

IF you'd like to be added FReepmail me. Thanks.

That is *literally* the first time I have seen Cain’s wife.

Or is that someone else?

So basically, if you have enough money, you can shove your message down the throats of millions, 7 times a day. Perry is exactly what we don’t need right now.

Yep - trashed Perry, fell for the Cain smears, and currently going after Newt. It looks like "we" won't be happy until Romney is the last one on his feet.

Divide and conquer — the issues are swept aside.

Good strategy...beats crappy wed ads. Of course, this could have been a part of his campaign plan the whole time.

And they've done a really good job of hiding their rope, eh?

...I didn't know they *made* toasters that powerful...

I feel like everything Fox News does is for the establishment Republican Party now too. I get sick watching them. Even when one of the other candidates would surge ahead of Romney, they kept calling all the others the “anti Romney”. Excuse me, but Romney should not have been characterized as the “one to beat” all this time. To do so just gave more credibility to Romney than he ever deserved to begin with! It is sickening.

On a lighter note, I was blessed to see one of Governor Perry’s ads on FOX News the other day, and it was cool to see that. I’ve seen it on the computer, but it looked so different when seeing it on television. It showed really, really well, both places, but it was just awesome on the big screen!

Based on that criteria, you are going to love having Romney or Gingrich, they are the smoothest talkers in the field.

But excuse me, I’ll let you get back to celebrating the fall of Rick Perry or his supporters, which you seem to love doing most. And congratulations, it worked; Perry is finished. Now you get to vote for a scaled down version of Donald Trump.