How The Soviets Eliminated Christmas - And, America Is Right On Track Doing The Same
JoeClarke.Net ^ | 12/06/2012 | JoeClarke.Net


The carton below is from Soviet Communist Russian times. You can see how the capitalist system is depicted as slavery - the opposite of how communism works, IE., free money, multiplied and returned to the worker - in the right frame. Tell me Obama does not think differently.

And, as many Americans kill off Christmas as the celebration of the birth of Jesus, so the Soviets replaced Saint Nick with "Father Frost" - a man who gives out presents because he is a generous communist.

From Wikipedia Ded Moroz
"Following the Russian Revolution, Christmas traditions were actively discouraged because they were considered to be "bourgeois and religious".[8]Similarly, in 1928 Ded Moroz was declared "an ally of the priest and kulak".[9]Nevertheless, the image of Ded Moroz took its current form during Soviet times, becoming the main symbol of the New Year’s holiday that replaced Christmas. Some Christmas traditions were revived following the famous letter by Pavel Postyshev, published in Pravda on December 28, 1935.[8] Postyshev believed that the origins of the holiday, which were pre-Christian in any case, were less important than the benefits it could bring to Soviet children.[9] In 1937, a man playing Ded Moroz arrived at the Moscow Palace of Unions for the first time. Joseph Stalin ordered Palace of Unions' Ded Morozes to wear only blue coats, so that they would not be mistaken for Santa Claus.[10] During Stalinist times, Ded Moroz, Snegurochka (or "Snow Maiden"), and New Year Boy were featured in Communist-type Nativity scenes, or public appearances, with Ded Moroz as the equivalent of Joseph, Snegurochka as the equivalent of Mary, and the New Year Boy as the equivalent of the Christ child.[11]
During the period of the Soviet Union's dominance over Eastern Europe, Ded Moroz was introduced to many nations. Following the fall of the Soviet Union, there have been efforts to revive local characters."
So, we have many more American secularists demanding that Christ be extracted from Christmas. And I might say, they all voted for Obama and other Democrats.
Below, Soviet "Father Frost" Replacement For Christian Saint Nicholas who was an actual Christian Bishop in Turkey - before Moslem invasion. 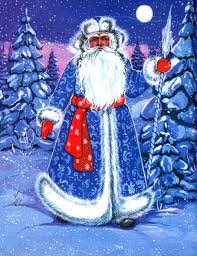 Below, is the Soviet "Nativity Scene" depicting Father Frost, the Snow Maiden (Mary's replacement), and no Jesus. The Communists sometimes added "New Year"  Boy to make it  more resemble a Nativity Scene. 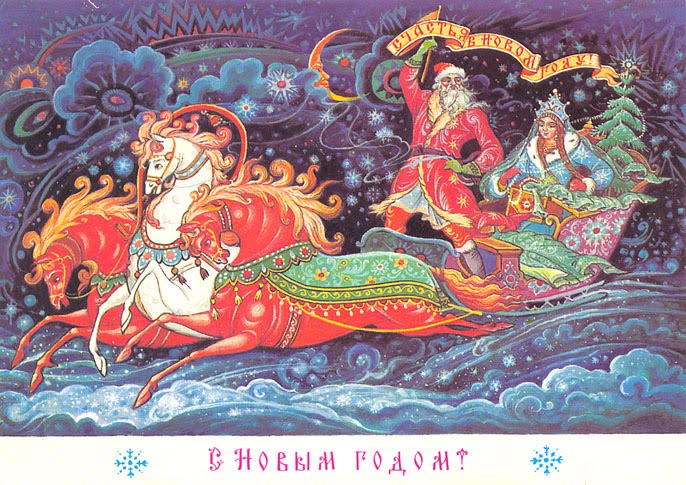 Russia is still very religious and Putin has encouraged it.

First you kill all the symbols.

I plan to print this out and send to my socialist relative instead of a Christmas card.

(the relative speaks Russian, but, being a lib, may not get the full appreciation of my motivation for sending it!)

I never heard the day after Thanksgiving referred to as Black Friday until around the mid-2000's. Now, it's becoming a bigger holiday than Thanksgiving.

6 posted on 12/06/2012 9:14:54 AM PST by Fiji Hill (Io Triumphe!)
[ Post Reply | Private Reply | To 4 | View Replies]
To: Fiji Hill
Yep. And ten years ago, people didn't eat Thanksgiving dinner by the Christmas tree. This year I walked around my area and counted quite a few houses with Christmas lights blazing a WEEK before Thanksgiving, and even more with a tree visible through the window.

I just can't get into the proper spirit when it is still 1.5 months away. And I think when the proper time to celebrate does come, for people who have been 'Christmasing' for months already it feels jaded, like a mere formality to finally just get it over with.

I was watching a one hour youtube video just yesterday called “The Lost World of Communism” and it occurred to me that this was exactly what the progressives in this country want for all of us...it’s chilling!

You will notice the similarities to dems/progressives throughout this video. Unless something happens we will see the day they build a wall to keep those with money and or brains from being able to leave their socialist utopia.

There was a scene in “Europa, Europa”, that took place in a Soviet classroom...the teacher asked the children to pray to Jesus for candy, and of course, none appeared....then she asked the children to ask Comrade Stalin for candy, and then candy started falling from the ceiling...and from what I heard, that was pretty standard in Soviet schools for the teacher to do this.

I will practice my Faith as I see fit. I am willing to both die, and kill(in defense of course), to continue doing so freely.

Didn’t the Puritans ban Christmas at one time here in America???

The nazis stripped out the Christianity and changed Christmas to “Julfest” - a celebration of their pagan past.

Christmas in in the heart. What are they gonna do? Cut our hearts out?

Ded Moroz would be “Grandpa Frost.” I remember reading an account of what it was like in one of the satellite countries after the Communists took over—instead of the traditional Christmas figures the children were taught about Grandpa Frost.

Look up the 1957 Soviet animated cartoon “The Snow Queen”.

In it, goodness is literally frozen out of a child’s heart.

An unintended depiction of what communism does to the human spirit, IMO.

Watch “Cargo 200” (a Soviet Air Force codename for a dead soldier transported from a warzone) feature movie if you want a realistic portrayal of life under decomposing socialist society. It might have a weird plot but the scenery is extremely brilliant in recreating a dilapidated town in ‘84 Soviet Union down to a small detail.

Director and producer claimed their mission was to adress growing nostalgy for Soviet Union in modern Russia. People has to remember how ugly it really was.

Here is a review from GreenCineDaily:

That is a review on IMBD from Romanian user:

It is a film about the death of totalitarianism in separately taken country. Year 1984, the life gloom of the Soviet power was condensed to the limit... Those who lived in USSR may cry when watching it. It is so cruel and at the same time so true. Every single part of you will tremble in the watching process. It is inspired from real facts, won’t let anybody indifferent, I mean for those who knows at least something about the cinematography... Roles are played perfectly, just how it was meant to be played. People with weak heart and people that loves American Pie series, skip it, you won’t like it anyway. For the rest, what can I say, you HAVE to see this movie. 9 out of 10<<<<