The karambit comes to us from Filipino Martial Arts (FMA), where it has a long history and complex technique background. The tiger claw shaped blade, held in a reverse grip, edge out, brings with it unique characteristics for slashing, hooking and controlling an opponent. It can be straight up nasty and very effective.

Unlike many martial arts weapons, the karambit remains an excellent choice for a backup weapon in modern combat. In particular, the karambit is useful as a close-quarters backup to a handgun. Someone grabs for your handgun--hold onto it with one hand, draw the karambit with the other hand and begin cutting important stuff. Your opponent is unlikely to hang onto your handgun for long. 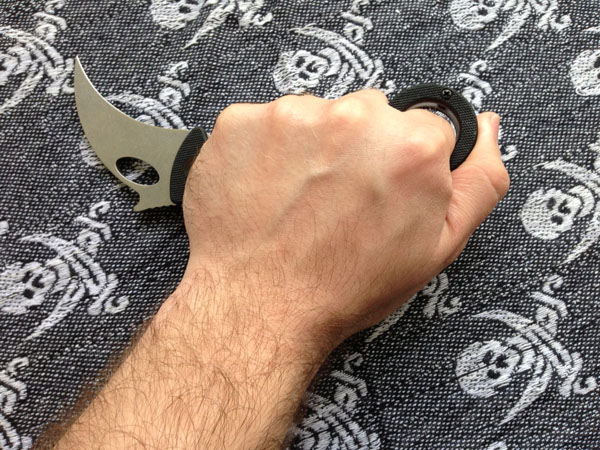 The karambit's finger ring aids in a speedy draw and retaining the blade in a struggle. If the karambit is small enough, the ring also enables you to grip the knife and hold onto something else simultaneously - flashlight, gripping a pistol, grappling an opponent. As an example, Tracker Dan's Honeybadger (pricey, custom) is purpose built for this kind of use.

Generally, a fixed blade is preferable to a folding knife, but many states have laws against concealed carry of fixed blades, and also limit the length of a folding knife carried. Under these circumstances, a waved folding karambit like the Emerson is an excellent choice. The wave (the hook on the back edge of the blade) flips the blade open during the draw, giving you the next-fastest thing to a fixed blade. And, karambits do not rely on blade length for their effectiveness - the Emerson karambit, as an example, has a 2.6 inch blade length, which is well under the legal limits imposed by most locales.

Karambits do definitely lose out a bit on utility purposes, though they will open packages and envelopes exceedingly well. I carry mine solely for defensive purposes and have less-scary knives for every day utility tasks.

The karambit is very intuitive to use, but, like most things, the effectiveness sky rockets with a bit of training. Pretty much all schools of FMA have karambit techniques that they teach. Here's a YouTube clip that provides a good sampling, performed by Guro Doug Marcaida. I like the student's expression at about 1:31 - he knows he's done for.

Most knife makers have made a folding karambit at one point or another, though the Emerson karambit is the standard that all others are measured to. The reverse grip of the karambit means that a wave feature is pretty much a must-have for rapid deployment. If the Emerson is out of your price range (at over $200, they ain't cheap), I'd check out the Fox karambit, which are around the $130 mark. I'm not aware of any other quality made karambits that also have the wave feature.

For fixed karambits, the options open up quite a bit more. A proper sheath will be critical. If you have the coin, there are some very nice models from custom makers.

Because of its unique characteristics, many armed professionals are beginning to train with and carry the karambit - from police officers to SEALs and others. For armed citizens, it can make an excellent back up/retention tool to a concealed handgun. Definitely worth a look.
TOPICS:
KEYWORDS: arts; karambit; knife; martial
1 posted on 05/31/2013 9:50:15 AM PDT by LibWhacker
[ Post Reply | Private Reply | View Replies]
To: LibWhacker
Similar to my Spyderco Civilian. I have a lot of respect for a knife as a backup for a gun, in that the two are *complementary*, providing coverage from mid to very close range.

This being said, things become very problematic when facing a “competent opponent”, as opposed to a typical fool. With the latter, a gun-knife combo is great; but with the former, “hauling *ss out of there” is always preferred.

Living close enough to the southern border, I have met up with some top-notch, school trained knife fighters that I would never dream of engaging with a gun even in pretty good gun circumstances. This is because error forgiveness has dropped to zero, and the slightest mistake will end up with you julienned.

If this fits your fighting style and defensive attitude, then the Civilian is a beautiful knife.

Nice
already have one as my daily carry

Yep, I’ve had one for years. Quit carrying it because people would freak out whenever they caught sight of it. But I never had an inkling as to its full defensive possibilities until I saw the karambit video this morning. I think I’d almost rather grapple with someone over a gun, than with someone with a karambit, especially if he has had any kind of training with it! Like the article says, and it’s easy to believe, its “effectiveness sky rockets with a bit of training.”

6 posted on 05/31/2013 10:20:26 AM PDT by LibWhacker
[ Post Reply | Private Reply | To 2 | View Replies]
To: yefragetuwrabrumuy
This being said, things become very problematic when facing a “competent opponent”, as opposed to a typical fool. With the latter, a gun-knife combo is great; but with the former, “hauling *ss out of there” is always preferred. 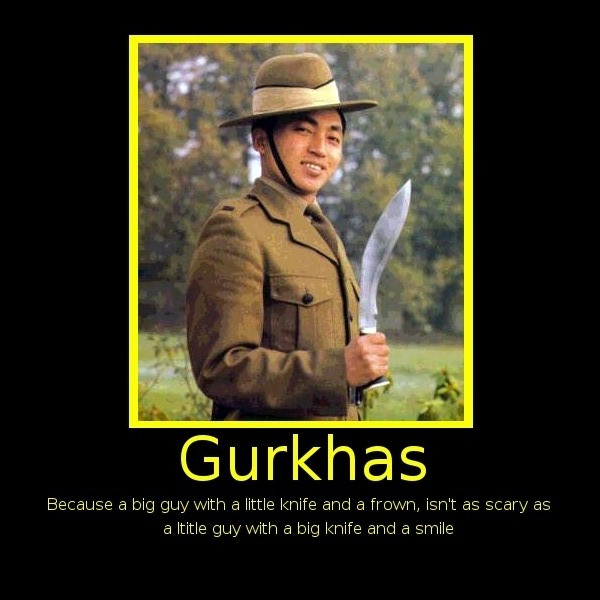 Lol, I'll never forget when I held my first real knife. Scared the crap outta me. It was a fighter. Big, heavier than most knives I was used to, and almost razor sharp. I definitely got the impression that my usual fumble-fingered approach to things simply would not do and could get me some serious stitches!

8 posted on 05/31/2013 10:31:55 AM PDT by LibWhacker
[ Post Reply | Private Reply | To 3 | View Replies]
To: LibWhacker
In some bars, I carry this licensed production model of Bill Bagwell's famous Hell's Belle, fighting Bowie knife, shoved in my waist band, across my belly.

As you can see it is huge, and well designed and in great detail from the guards to the Spanish notch, to the flexibility of the blade for dealing with the internals and bone and blade to blade contact, a clip for back slashing, this is not for chopping wood and camp work. The blade is 11" and the overall length is 17", it is huge, but is known for having a 'quick' feel, a balance that lends itself to quick use of the tip in slashing and back slashing. Another reason I’ve got to get out of this sorry excuse for a state — no autos allowed.

***Yep, I’ve had one for years. Quit carrying it because people would freak out whenever they caught sight of it.***

How about this old add.

These horrid weapons are usually called BOWIE Knives. They were invented by a man in the state of Louisiana. His name was Buie. It is a French name and is pronounced B’ooie. Afterwards he went to Texas, and was killed there in a battle.

People in slave states often carry such knives about them. When they get angry they draw the knife, and sometimes STAB ONE ANOTHER!

(From a pamphlet THE SLAVE’S FRIEND published by the Anti-Slavery Society in New York City.

So, using panic about a weapon is not new.