When Huma Abedin was two-years of age, her family moved to Jeddah, Saudi Arabia. The reason for the move was Huma’s father, Syed Abedin, was recruited by Abdullah Omar Naseef to work for the Institute of Minority Affairs. This same Naseef spent time as Secretary General of the Muslim World League which works with The Muslim Brotherhood.

At age 18, Huma returned to the United States, attending Georgetown University in 1996.

She began interning for Bill Clinton and in time became an aide to the Clintons, working in both Hillary Clinton’s senatorial campaign and her failed bid for President in 2008.

While interning with Bill Clinton, Huma Abedin also worked as an executive Board member of George Washington University’s Muslim Student’s Association, and was head of the “Social Committee” form 1997 to 1999.

Shortly after Abedin’s departure, the spiritual guide was Anwar Al-Awlaki who was also the spiritual advisor of some of the 9/11 terrorists.

Another chaplain at the GWU was Mohamed Omeish, former head of the Islamic Relief Organization which has been tied to Al Qaeda.

From 1996-2008, Huma Abedin worked for the Institute of Muslim Minority Affairs. During this time, she still worked closely with Hillary Clinton, and when Clinton was appointed Secretary of State in 2009, Abedin became her deputy chief of staff. It was at this time that Abedin’s name was removed from the Journal of Muslim Minority Affairs roll call.

In June 2012, Abedin was given permission to do outside government consulting work as a “Special Government Employee”.

As a consultant, her outside interests included the U.S. State Department, advising Hillary Clinton, The William Jefferson Clinton Foundation, and helping a Clinton crony named Doug Band who owned a company called Teneo. The administration was asked to explain this conflict of interest by different groups, but was rebuffed.

At the same time, five Republican lawmakers sent letters to the Inspector General of the Department of Homeland Security, the Department of Justice, and the State Department asking if the Muslim Brotherhood was gaining undue influence in the decision making of the administration.

Questions were raised about Huma Abedin’s proximity to decision and policy making within the State Department. Other Republicans, such as John McCain and John Boehner. had no concerns over the matter.

Coupled with the information that Hillary Clinton used a personal server in violation of government regulations for all government correspondence, it has since been learned that Huma Abedin and Clinton’s chief of staff, Cheryl Mills, also had addresses on the server.

At the present time, I do not know of anyone who has requested those e-mails from Clinton’s personal server.

Hillary Clinton, intervened to allow Tariq Ramadan, the grandson of the Brotherhood’s founder to enter the United States.

This administration continues to support Hamas, a Muslim Brotherhood offshoot, to the tune of millions of dollars every year. This same State Department has allowed organizations like the Organization of Islamic Cooperation, influenced by the Brotherhood, to instill Sharia compliance into American free speech rights, tacitly restricting any criticism of Islam in the United States.

Although it has not been made a part of our laws, does anyone doubt the possibility given Obama’s viewpoints on both the Islamic world and our own?

The question still remains and is asked by many House conservatives, how did Huma Abedin qualify for top secret clearance? Every time it is brought up, it is firmly and quickly slapped down by establishment Republicans and this administration.

Hillary Clinton declared in 2010, at the Dar Al-Hekma College in Jeddah Saudi Arabia, that Huma Abedin was almost like another daughter. That can bring about two different opinions. If Hillary actually feels that way and does not understand the ramifications of meeting Huma’s mother Dr. Saleha Abedin, a known terror-tied professor, then she does not understand the world stage as it is and should never be president. If she does understand, and is assisting the Muslim Brotherhood in getting what they want, she should be thrown in jail, and never be considered for president. Either way, this country cannot afford someone with the baggage that comes with questions of national security.

TOPICS: Politics
KEYWORDS: clinton; huma; humabio; mbinfiltration; muslim; repository123 Navigation: use the links below to view more comments.
first 1-20, 21-32 next last
1 posted on 08/17/2015 4:31:41 PM PDT by samovar123
[ Post Reply | Private Reply | View Replies]
To: samovar123
Thirty years ago, this would have landed the whole bunch in Federal prison. However, we live in the Age of Lawlessness.

Nothing these evil, wicked people do have ramifications.

I believe we are near the Last Days.

Michele Bachmann was castigated for calling attention to Huma.

In the real world she couldn’t get a security clearance anywhere in government or the military.

Those photos of her and Hillary whispering into each other’s ears (and vise-versa) are absolutely creepy.

By her OWN party.

The lying, EXEMPT, Moslem-Brotherhood supporting,
Benghazi-truth-destroying, and IRS Atrocity launching,
GOP belong in Hell, which is what they made America
for their undocumented Moslem King.

Michelle and P were born in the same town ..Waterloo. Iowa.

Does the government (U.S.) give top secret clearances to non-citizens? 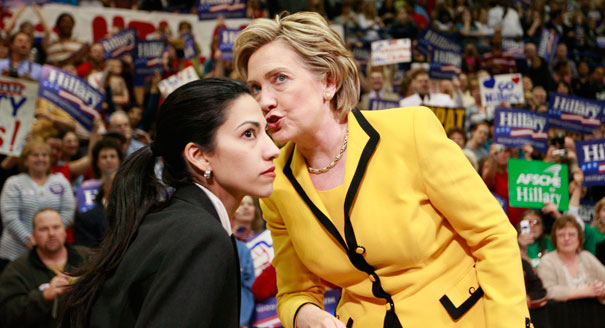 Nevermind, I guess she is a citizen.