A close associate and protégé of far-left activist billionaire George Soros gave a super PAC supporting Ohio Gov. John Kasich $200,000, the third largest contribution made to Kasich’s presidential effort as of the end of 2015.

Soros, who has given $7 million to a PAC backing Hillary Clinton this election cycle, is a huge backer of all things liberal. This election, Soros has made clear his opposition to the GOP front-runners, saying: “We must reaffirm our commitment to the principles of open society and resist the siren song of the likes of Donald Trump and Ted Cruz, however hard that may be.”

Kasich is poised to halt the momentum of either Trump or Cruz should he have a strong showing in New Hampshire. The latest RealClearPolitics polling average puts Kasich tied for third with Sen. Marco Rubio in the Granite State at 10.7 percent, just a point behind Cruz.

The New Day donation as listed by the FEC as being from “Soros Fund Management, LLC,” presumably because Bessent was working for the firm.

Bessent started working for Soros’ company in 1991. In August, it was announced that Bessent would be leaving Soros Fund Management to launch his own hedge fund — Key Square Group — with a $2 billion investment from Soros himself, according to Bloomberg. Bessent’s successor at Soros Fund Management was appointed in January.

Bessent continues to “advise the family office and remains close to Soros and his family,” according to the official statement from Soros Fund Management announcing Bessent’s departure.

Soros is a major power behind the Western left, pumping millions of dollars into various causes each year. He is in favor of open borders, gun control, abortion, and euthanasia

When asked for comment, New Day for America downplayed the Soros connection.

"The contribution … was a personal contribution made by Scott Bessent, a longtime Republican donor. It did not come from George Soros or his company. In the 2016 cycle alone, Mr. Bessent has also contributed to Jeb Bush's Super PAC (Right to Rise USA), Sen. Lindsey Graham and former Speaker John Boehner," said Connie Wehrkamp, press secretary for New Day For America.

"Mr. Bessent has also donated to Marco Rubio, Mitt Romney, Carly Fiorina and Rand Paul in the past," she added.

Bessent has indeed made contributions to Republicans, but he has donated more to Democrats.

According to the Center for Responsive Politics, Bessent contributed $360,354 to various political campaigns from September 1996 to January 2015. Sixty-five percent of that went to Democrats. In 2014, for example, Bessent donated $25,000 to the Super PAC Ready For Hillary. The amount of money Bessent has given in support of any other Republican candidate is a fraction of what he gave the Kasich superPAC.

But Kasich is unique in the current GOP field for his comparatively liberal positions. The Ohio governor angered conservatives when he accepted a Medicaid expansion under Obamacare. He has described the notion of building a wall along the Mexican border as "just crazy" and has spoken in favor of a path to citizenship for illegal aliens residing in the U.S.

Soros's Open Society Foundations, an international grant-making network, works to encourage left-wing values and to erode traditional Christian ones by promoting the acceptance of "gay rights." Just some of the organizations Soros and his OSF have funded include Media Matters, MoveOn.org, ACORN, National Council of La Raza, Huffington Post, Southern Poverty Law Center, People for the American Way, Planned Parenthood, and the National Organization for Women

This kind of crap should tell everyone all the need to know. This SOB is trying to buy the candidate he prefers; don;t let him.....VOTE Cruz or Trump!!!!

Billionaire George Soros gave a super PAC supporting Ohio Gov. John Kasich $200,000, the third largest contribution made to Kasich’s presidential effort as of the end of 2015.

Soros, who has given $7 million to a PAC backing Hillary Clinton this election cycle, is a huge backer of all things liberal.

Soros has made clear his opposition to the GOP...

Is it possible to hate the GOP any more?

Kasich is now the designated GOPe candidate to stop Trump.

I predict after Tuesday, both Cruz and Rubio will suspend their campaigns and endorse Kaisch.

The convention is held in Cleveland, which....happens to be in Ohio!

We must be aware, all the democrats are communists, and some of the republicans are, too.

The Ultimate Dream - Trump wins and hands Soros over to the Russians.

Soros was the force and financial backing behind the creation of moveon.org. Moveon.org has openly declared their intentions to disrupt rival political candidates with violence. George Soros should be persona grata in American politics. Every candidate that has accepted his support should be expected to return all previous donations and disavow all association with him and groups allied with him.

Look for a whole lot of cheating in Ohio Tuesday.

It’ all over: Boehner has endorsed Kasich!

and how's that working out for ya, Johnny? 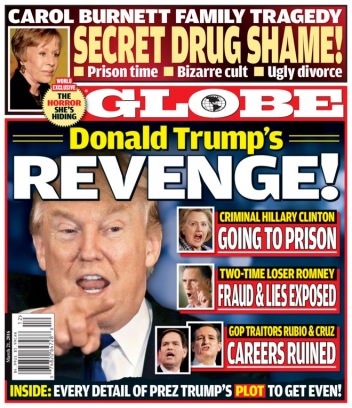 by the way, living well is the best revenge.

Let me know if you want on or off the ping list.

It tells us what we’ve figured all along...there are not two parties or if there are...this kind of stuff buys their cooperation once in office.

Wonder if this will change any Kasich supporters minds?

Folks that is what happens in those smokey back room deals, that all PROFESSIONAL POLITICIANS hold in PRIVATE...SO THAT Americans DO NOT KNOW WHAT THEY ARE DOING...

VOTE FOR DONALD J. TRUMP, THESE BACK ROOM, GOOD OLD BOYS CLUBS WILL COME TO A COMPLETE HALT,,,AND WILL BE EXPOSED TO THE AMERICANS...

THEY ALL FEAR DONALD J. TRUMP AND THEY DAMN WELL SHOULD...