It seems we have something more to be thankful for the day after Thanksgiving!

On November 25th, 2016 after ruling over the poor people of Cuba for 57 years, Fidel Castro, AKA El Jaffe, El Commandant and the butcher died and entered eternity Godless and Christless as he lived and reigned.

Born in the hamlet of Biran in 1926 to a hardworking Spanish farmer Angel Castro y Argiz, Castro was the illegitimate offspring by Angel and a cook, Lina Ruz Gonzales. Angel served as a soldier in the Spanish American war in Cuba and at wars end returned where he worked hard and eventually became a humble but successful landowner who did business with United Fruit Company.

Castro prospered and was eventually able to buy and lease a total of 11,000 hectares of land which yielded pine wood, livestock, and sugarcane. Although he was hard working and thrifty, he was not a moral man. He had many out of wedlock children including Fidel and Raul.

Compared to most children in Cuba, Fidel was a privleged child. He was able to attend boarding school in Santiago but was expelled for misbehavior and sent to a strict Jesuit school instead. Fidel and his brother were unruly and were poor academics. Nonetheless with help from his father he entered law school in Havana Cuba where he was described as politically illiterate.

Castro was mostly involved in sports, student activism and gansterismo culture, he was known to be connected to street gangs in Havana and carried out beatings even assassinations against students who opposed his left wing views. His main interests in school were Geography, history and debating. In 1947, Castro joined the Far left Party of the Cuban People Party under Chibas.

Castro was opposed to the ruling dictator of Cuba, Juan Batista who like Castro was a socialist though not as far to the left as Castro. Castro attempted a coup with the help of street gangs but failed to do so. Batista himself had paid violent gangs to fight his opponents and under threat Castro fled to the US where he started a revolutionary movement against the American backed Batista government.

Throughout the 1950s, Castro lead a revolutionary reign of terror throughout the island of Cuba. Although many of his victims were themselves cruel evil tyrants such as the Alcalde of La Plata, many of Castro's victims were innocent peasants accused of counter revolutionary activities and many of Castro's guerilla attacks decimated communities. Were it not for the barbarism and tyranny of Batista and his waning popularity Castro's revolution would not have succeeded.

On new years day 1959, Castro seized the Island nation. He ordered his men to carry out widespread vandalism and looting in the streets of Havana and other major cities and purged several prominent judges and politicians including his supporters. His first task as Premier and dictator was to purge the island of anyone suspected of counter revolutionary thought.

He next task, nationalize land and tourism and the banks. and seize the assets of foreign land owners and the wealthy. The land reforms of Castro were similar to that of Zimbabwe dictator Robert Mugabe, limits were set on land ownership and could be seized at anytime, ownership was transferred to peasants who were inexperienced in farming and economics and the Island soon suffered poverty and food shortages that were only stifled by aid from the soviet union.

America had an enemy country only 90 miles from its shores off Florida coast. His most notorious act besides butchering his own people was to build with help from the USSR, nuclear ballistic missiles that could strike America without warning. President John F Kennedy countered with a blockade an airstrikes on constructed missile sites. The situation lead to a stand off against the US and USSR that almost escalated into World war 3! Soviet Premier Nikita Khrushchev backed down before things got out of hand. He agreed to pull missiles out in exchange for our removing missiles from Turkey.

After the crisis, Castro focused on fomenting communist revolution in the third world especially in Africa. This lead to the overthrow of the colonial government of Angola in 1975 and a civil war that engulfed the country between the Cuban backed communist MPLA, American backed nationalist FNLA and the popular left of center party UNITA which was backed by the US as well as South Africa.

The war lasted well into the 80s. America refused to intervene due to fatigue from the Vietnam war and instead backed South Africa's military to intervene in the nation. South Africa fought its own war as well in Numidia which was attempting to break away from South Africa. Castro's attempt to intervene failed miserably. The Cuban military was defeated time and again by South Africa forces. Many of his Generals were executed or defected to the US in fear of being executed.

In the later years and following the collapse of communism, Cuba's economy was left in shreds. Many of the people there fled the nation to America in fragile rafts through shark infested waters, this despite Cuba having universal healthcare, high literacy, guarantees of free food, free housing and other perks and despite America not having those free giveaways. This is how bad things were in the nation Cuba.

Castro's solution to patch things up and prevent being overthrown was to raise the minimum wage and pensions and to execute dissidents and those suspected of being opposed to him. In the end Castro was forced to step down due to failing health. Castro delegated responsibilities to his brother Raoul who is destined to succeed him.

Despite being one of the 20th centuries biggest mass murderers, Castro is supported throughout the world by the far left and liberals everywhere especially in the European Union and in Hollywood. Among the more infamous stars who embraced and supported dictator Castro were Hollywood film producer Steven Spielberg, Oliver Stone, Harry Belafonte, Leonardo DiCaprio and more notorious, Sean Penn who himself has lavished praise on Castro and has mourned his death.

This Thanksgiving weekend, the liberal mainstream media has another reason to cry and blubber this after the election of Donald J Trump, the loss of one of their most beloved world leaders. No sooner had Castro died and was dragged to hell by Satan and his imps that the liberal media began to interrupt regular programing just to announce his death and whine and wail. The special bulletin not only interrupted basic corporate news but even networks like Nickelodeon interrupted their programing to announce the death of Castro.

The liberal media no longer hides its liberalism ever since Donald J Trump became the primary candidate and eventually the president, they continue to shamelessly bare their liberalism before the American public with their disgusting. EVEN IN SPORTS IN THE NFL OF ALL PLACES YOU CAN SEE THE LIBERALISM SHINE! THAT'S RIGHT! San Francisco Quarterback Colin Kaepernick wore a t-shirt praising Castro's education investment. He fails to note however that schools in Cuba are run like a cross between military drill camps in the German SS and the agogae in Sparta.

Children are forced to attend school from 7AM to 5PM and are saddled with tons of homework. They are kept hungry most of the day until a meager lunch is served where they are told that Castro made this possible. The schools like our own emphasize indoctrination and obedience rather than academics which is all for show than blow. Although Cuba does boast high literacy ratings, most of the population are limited in their knowledge of the outside world.

Our own population thanks to our own version of the communist dumbing down indoctrination called public schooling also has had a similar effect as we see! Many younger Americans even those of Cuban ancestry do not view Castro as the vicious tyrant as he was but ignore the truth about his activities. Castro is viewed as a generous kind hearted old man and his opponents fascist traitors worthy of death. Even the nickelodeon network wont educate the children on the dark side of Castro only going so far as the Cuban Missile crisis or his intervention in Angola's civil war.

So ends the life of one of the last of the commie despots! Castro thought that there was no God and that there would be no consequence in the end of his life for his actions. Castro now realizes too late that Jesus is lord and that we all must answer for every word and deed we have committed. Even every thought. Castro thought he would get away with murder, he was wrong and the devil now has a new fireman. He'll no doubt be wailing and gnashing his teeth along with other socialists, Hitler, Mussolini, Stalin, Mao, Hugo and his predeceasor Batista! And don't forget about Che Guevera and those Cubans who served along side him. The good news its not too late to repent of your sins and serve Jesus Christ. Make him lord of your life and you wont ever have to burn in the lake of fire with Fidel Castro and his crew. You can spend eternity in heaven.

FIDEL CASTRO RIGHT NOW IS WISHING HE DID.... 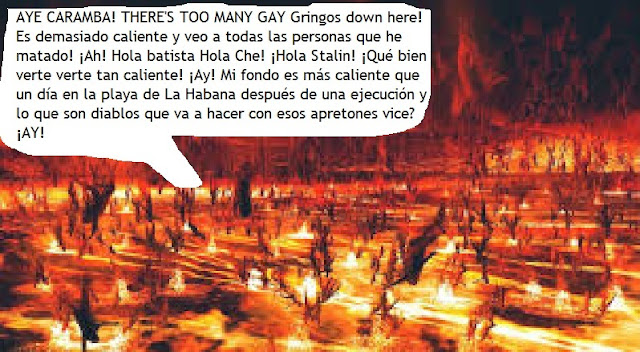 As Coroner, I must Aver I thoroghly examined her! Not only is he really dead, HE'S REALLY MOST SINCERLY DEAD!!

Yes Chevy Chase Francisco Franco IS still dead but at least he was no pinko and he did a good job rebuilding Spain with our help! He might have had blood on his hands but thankfully 99% of it was commie blood so good for him.

He had been pretty much politically irrelevant since 2006, and reached a very ripe old age of 90 until he was “fired”.

When a leftist says that healthcare and education are free in cuba ask them about the fact that aids patients are quarantined in camps for life. The media don’t want us to know that.

Very well written, however, his brother’s name is spelled Raul, not Raoul.

I hope he was smelling sulphur with his dying breath.

I'll be along in a minute - got a little chore first.

Isn’t it ironic... don’t you think? A little too Ironic? Yeah I really do think!