Buses from NM and AZ were off-loading protestors at the Texas capitol, with signs saying “I AM AN ILLEGAL WITH RIGHTS!” and “People Are NOT Illegal!”, others attacking our splendid governor, Greg Abbott. Who paid for those buses and the trip expenses? Inquiring minds want to know.

3 posted on 05/30/2017 1:40:08 PM PDT by txrefugee
[ Post Reply | Private Reply | To 1 | View Replies]
To: All
The Russia/Russia bs is just a rat and rino distraction from the real meddlers and real interfering evil scum of our elections. The Mexican Government, their illegals here, the rat politicians, and our Rino’s, who want them for their cheap labor and votes, are the real meddlers in our election, not Russia!

Mexico has been interfering in our elections since LBJ!

Illegals and their liberal supporters threatening Texas legislators for daring to uphold our laws re immigration in the Gallery @ the Texas Legislature Building. 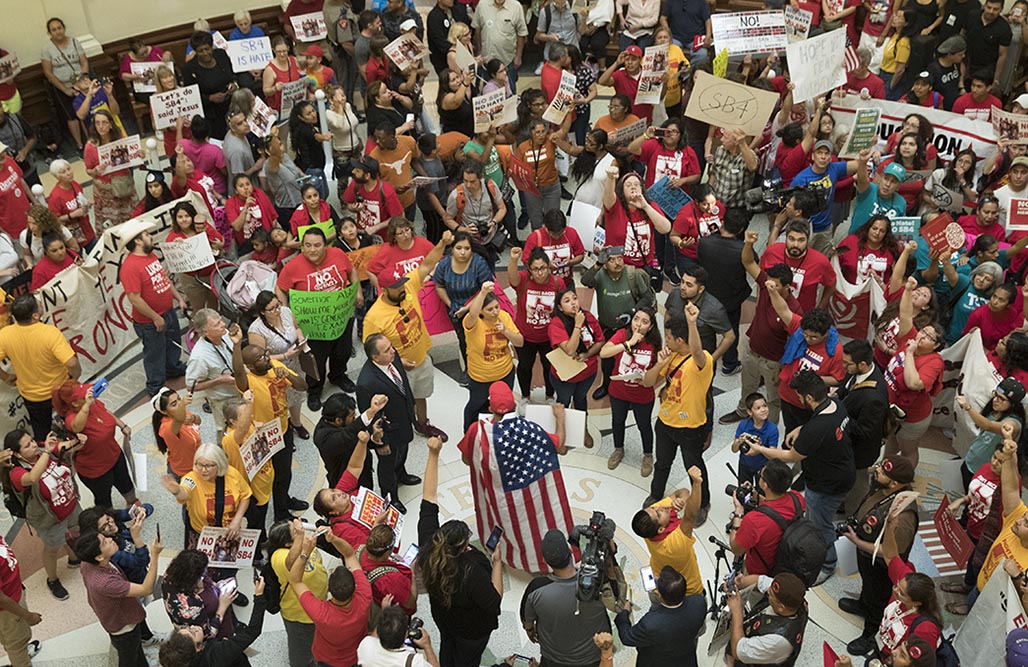 How many millions of $’s/Pesos has Mexico donated to the democrats to keep their illegals in America, since LBJ?

How much illegal Mexican money did Obama and Clinton receive personally and for their elections?

How many illegal Mexicans voted for Illiarily in the last election and for Obama's two terms?

How many illegal Mexicans voted for rats in our cities, counties, states and of course at our federal level?

Who owns the NY Slimes and other election meddling companies?

It is past time for our Congress to stop the Mexican meddling/interference/hacking at every level in America.

How many millions of $’s has Mexico donated to the democrats to keep their illegals here, at every level, city, county, state and Federal level?

Again, the Russia/Russia bs is just a rat and rino distraction from the real meddlers and real interfering evil scum of our elections. The Mexican Government, their illegals here, the rat politicians, and our Rino’s, who want them for their cheap labor and votes, are the real meddlers in our election, not Russia!

Time to enforce our standing laws against illegal immigration and illegals voting!

The enemy of men’s souls is not happy.....he’s sure got a lot of lefties willingly on the dark side!

Thanks for posting this. We had not seen this before.

Who paid for these illegals to cross state borders to commit crimes?

Why isn’t Juan McAinal upset about this versus his insanity about Russia/Russia.

He gave this altercation a lot of time thins morning. What jumped out at me was as the demonstrators were trying to make enough noise to shut down the legislative business they were waving signs declaring themselves as illegals. The angry leftist latinos took offense at one of the lawmakers saying he was going to call ICE.

My simple thought was if any criminal waved a sign declaring his crime or intended crime, wouldn't it be right to call the cops?

This morning NPR implied that Rinaldi started the fight with Nevarez, threatening to shoot him in the head. Rinaldi is the bad guy, according to NPR Morning Edition.

Here’s *this morning’s* segment on NPR where Morning Edition portrayed Matt Rinaldi as a violent instigator, a bad guy triggered by Democrats’ use of Facebook Live:

It was really quite incredible how NPR included information that made Rinaldi look absolutely horrible, and intentionally excluded any hint of information that accounted for his “threat,” that might have shown the Democrats to be the instigators.

ALL illegal aliens ARE subject to removal.

We should not give them the opportunity to victimize Americans before they are removed.

There are NO “law-abiding” illegal aliens.

ALL illegal aliens MUST commit other crimes DAILY to continue their illegal presence.

Remove ALL illegal aliens, they are citizens of other countries who broke into our country.

How many would allow home invaders to stay in their house?

Bear in mind that at least one third of House Members on the floor of the house are packing at any one time.

True, but its a sure thing the only thing this Democrat shoots off is his mouth.

As a law abiding citizen, I believe you are expected/required to report criminal behavior.

Democrats are the party of illegality.

“Nevarez apparently lost total control of his faculties and began assaulting him, to the point that other legislators had to step in to break up the fight.”

The holding tank will be crowded. You can’t assault someone for taking legal action. So apparently Nevarez doesn’t like legal action. If that’s the case, you are expected as a representative to stay within legalities. So you should be removed from your position after you get out of jail as you cannot perform the tasks you swore to accomplish.

If you don’t like a law, then get it changed. But until then, you adhere to it. And by trying to harm a citizen staying within his rights, you are well outside yours. And wasn’t this the definition of a hate crime?

I’m a firm believer that any buses bringing in protesters should have their tires flattened. A person can simply unscrew the valve stem and let the air out. No need to slash the tires.

Then the hired agitators will be stuck for hours on end waiting for the repairs to be completed. Plenty of time for ICE to visit them and weed out the illegals, yes?

Ramon is not in jail? or are reps immune from criminal interdiction while in session in the chamber?

It is a missed opportunity to round up a bunch of illegal alien troublemakers and ship them across the river.

Soap in the gas tank is orders of magnitude more appropriate.