A Response to the Idea of Removing the Natural Born Citizen Clause From Our Constitution
puzo1.blogspot.com ^ | May 17, 2018 | Mario Apuzzo, Esq

A Response to the Idea of Removing the Natural Born Citizen Clause From Our Constitution
Thursday, May 17, 2018 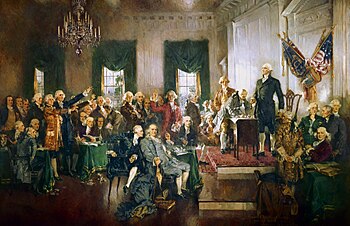 Mario Apuzzo, Esq.
May 17, 2018
http://puzo1.blogspot.com
TOPICS: Government; History; Politics; Society
KEYWORDS: 2018election; 2020election; constitution; election2018; election2020; electoralcollege; eligibility; faithlesselectors; nationalpopularvote; naturalborncitizen; nbc; npv Navigation: use the links below to view more comments.
first 1-20, 21-40, 41-60, 61-63 next last
Not only should the natural born Citizen requirement remain as is, but it should be expanded to require all executive branch cabinet members, all SCOTUS justices as well as Speaker of the House and President pro tempore of the Senate be natural born Citizens.

The states should also bring back the requirement for Governor as well.

We live in even more dangerous times than in the 18th century, there is plenty of foreign "intrigue" out there.

All of the unconstitutional, anti-United States, action we saw the Usurper Soebarkah undertake should awaken the country to the absolute need of the natural born Citizen requirement.

Well, since I am a supporter of blood and soil nationalism, this does not appeal to me.

and as they make immigration changes, end ‘dual citizenship.’ If we want to make some kind of first or second generation “heritage” deal, that’s fine but to be a citizen of two countries (or more) simultaneously is ridiculous and dangerous to the USA and to the ‘other’ country(ies).

Yeah, they seem to want someone from Nigeria to be president. Oh, wait, didn’t we???

This guy is so full of crap his eyes are brown.....

Yup, since that’s Professor Walsh’s stance, sounds like he doesn’t have the interest of our country in mind. He sounds like a globalist...in the least. No wonder he suggests getting rid the requirement.

I believe an amendment to ban citizenship for illegals’ anchor babies would pass.

I don’t know why people are so timid about immigration. I am anti-immigrant; in fact, I think that the smartest thing the U.S. could do is adopt, word for word, the immigration laws of Mexico, or Japan, or China, or any other third world country.

Even today, whenever any conservative leader, such as Rush Limbaugh, talks about immigration, the first thing they rush in to say is that they are not against immigration, it is illegal immigration they specify.

As Ann Coulter explained in her book, it is LEGAL immigration that will end up destroying the country.

Why bother it’s not enforced anyway at least if you’re a Rat minority.

McCain was born to parents out of the country in service to the nation. You don’t seriously believe that children of military and diplomatic personnel are ineligible to be president.

That is PRECISELY what they taught us Brats in the elementary school on the base in Beaufort.

That singular office must be free of any hint of foreign allegiance or sympathy.

Imagine a world where McCain was elected.

Someone stirs up trouble in Panama. ANYTHING he does or DOESN'T do becomes a democrat political football.

These critters are deepstate critters who wish to make it easier to penetrate the USA from within and take it down. In short they hate the USA. Think Gramsci. Think Communist manifesto.

Besides it is insane to put your country at such risk in the name of Progressive political correctness.

So Putin could run?

That would allow President Soros.

What a great idea!

It’s not like it’s enforced. Lots of non-natural born citizens have been allowed to run for president. Off the top of my head in my lifetime, George Romney, John McCain, Barry Soetoro, Ted Cruz.

It did not nor will future usurpations. Public school has assured that.

Natural Born for ALL Federal Offices:
Two Citizen Parents, born on US soil.

States should control requirements for their state office holders. One would also want an “In-State” born requirement for higher state offices. Imagine the problems all the Cali Refugees will cause in Texas over the coming years?
Same of NY Refugees in Florida.