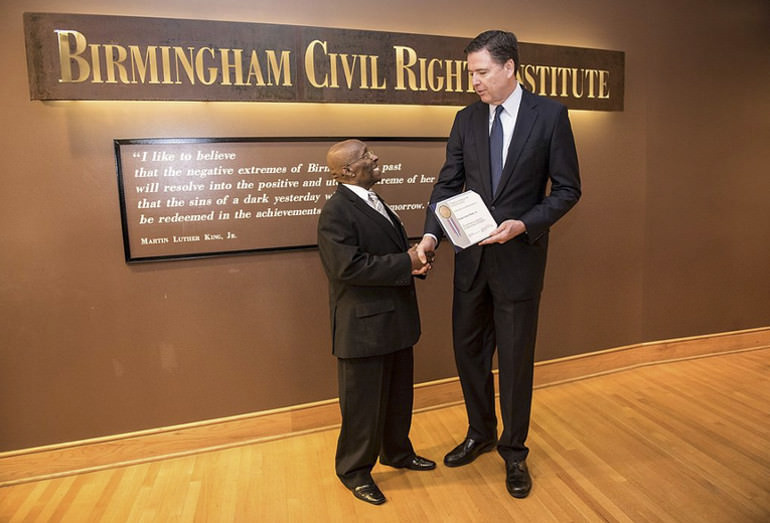 Former FBI Director James Comey refused to carry a gun when he was with the FBI. It is likely he never carried a gun during his career. He grew up in Yonkers, New York. He obtained his Batchelors of Science at the College of William and Mary in Virginia, well before Virginia passed a shall issue concealed carry law. From inews.co.uk:


In his memoir, A Higher Loyalty, James Comey writes of his time at the FBI: “In every staff meeting, 80 per cent of the attendees had a gun on them. I eventually grew accustomed to seeing a pistol in an ankle holster when the deputy director crossed his legs during a meeting.”

He was permitted to carry one himself but chose not to. “I was surrounded by armed people all day long. If I wasn’t safe in the hands of the FBI, then our country was really in trouble.”

Mr Comey spoke of how he worked with the Brady Campaign To Prevent Gun Violence on engaging with the NRA to improve drugs laws during the early part of his career as a prosecutor.

He obtained his law degree (JD) from the University of Chicago at a time when it was illegal to possess pistols, that had not been previously registered, in the city. Only government officials, such as aldermen, were allowed to carry firearms in Chicago.

After graduating from law school in 1985, he clerked for a New York Judge and joined Gibson, Dunn & Crutcher.

In 1995, Virginia passed a shall issure Concealed Carry law.

In 1996 he became a special deputy counsel of the committee investigating the Whitewater real estate scandal involving Hillary and William Clinton.

1996 was the year James Comey began a five year term as Assistant U.S. Attorney for the Eastern District of Virginia.

James Comey likely would not have been able to carry at work, as a federal lawyer in government offices.

U.S. Attorney from 2001 to 2005. During that period he prosecuted Martha Stewart.

Concealed Carry permits are very difficult to obtain in Maryland. Comey might have been able to obtain one, in his powerful and connected position, but we have seen no evidence of this.

From 2010 to 2013 he was General Counsel at Bridgewater Associates.

The headquarters of  Bridgewater Associates is in Westport, Connecticut.
Concealed Carry permits can be obtained in Connecticut, with some difficulty,  but there is no evidence the James Comey obtained one.

In early 2013, he became a Senior Fellow at Columbia Law School, and served on the board of HSBC holdings until July of 2013.  Columbia is located in New York City, where carry permits are nearly impossible to obtain.

He was appointed to be the Director of the FBI in September of 2013.

Given that Director Comey has stated that he did not carry a gun as Director of the FBI, it is very likely that he never regularly carried a gun in his life.


Because there is nothing proportionate between the armed and the unarmed; and it is not reasonable that he who is armed should yield obedience willingly to him who is unarmed, or that the unarmed man should be secure among armed servants. Because, there being in the one disdain and in the other suspicion, it is not possible for them to work well together.

It is not surprising, that James Comey has been in favor of infringements on the Second Amendment. He decided to be unarmed. The Second Amendment offers him relatively little. He may see armed people as threats.

Thus, he has no problem in restricting the right of the people to be armed. Those restrictions do not affect him directly. He is infringing on other peoples' rights. It is very similar to legislatures who spend other peoples' money.

Politicians who have never carried a gun should not be put in charge of people who do so every day. It is no coincidence that most presidents had personal experience in carrying guns.

©2018 by Dean Weingarten: Permission to share is granted when this notice and link are included.

He openly supported the Brady campaign.

That makes him better than everyone else?? That’s how he thinks. One big, tall egomaniac.

Isn’t there like an FBI regulation where you have to go to the target range every six to twelve months? How would he just avoid that?

Isn’t there like an FBI regulation where you have to go to the target range every six to twelve months? How would he just avoid that?


He avoided any requirement to show shooting competence by not carrying a gun.

He looks like a big clumsy dork. Maybe it’s better to keep him away from any weapon that he might drop accidentally.

Does this author really believe that an FBI agent who carries a gun everywhere is less hostile to the Second Amendment than one who doesn’t?

Comey has probably never carried a gun in any regular capacity in his life. He openly supported the Brady campaign.>>>>>>>>>>>>>>>

Every FBI member should be required to carry and qualify every 3 months or loose his job.

Come is a lib....and a moron.
He’s also an enemy of the People and should be locked up.

“Isn’t there like an FBI regulation where you have to go to the target range every six to twelve months? How would he just avoid that?”

Nowhere in the article did I see a comment stating he was ever a torspecial agent, a field agent. So, he apparently was always in some sort of administrative role. How did he avoid mandatory firearms training? By becoming FBI Director?

I believe 6'6" or 6'7". And this "Profile In Courage" tried to hide from President Trump behind curtains.

I’m so glad this douchenozzle got fired.

I would suspect poison his preferred weapon.

I have known a lot of LEO executives that carry and hardly ever shoot a Q. course.

They just exempt themselves.

But there are always some that are gun people most are not.

To be fair, they were very long curtains.

I wonder how much time he spends picking out what suit to wear in the morning so that he can blend in with whatever curtains or upholstery he expects to encounter during the typical work day?

I wouldn’t be surprise if he has a floral suit, since he spends time in meetings looking at other official’s ankles.

What is a Batchelors of Science?

The more we learn about this big drink of water the more despicable he is.