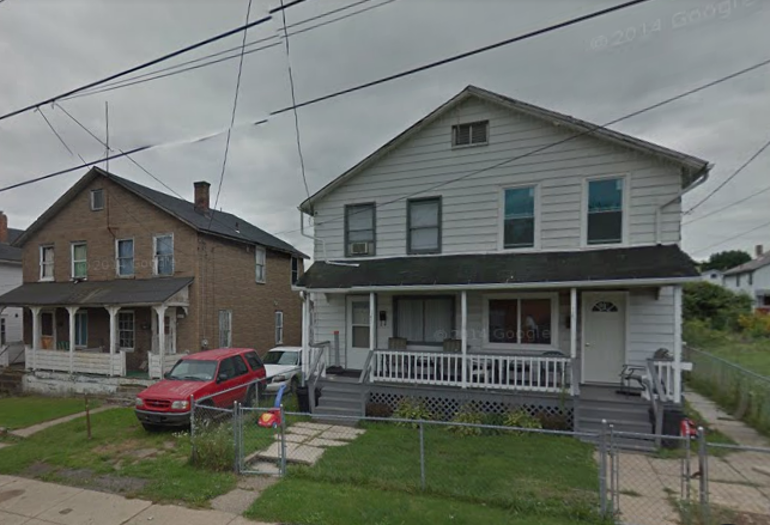 At about 1 a.m. on July 18th, 2018, in Alquippa, Pennsylvania Brionna Hicks stepped outside on the porch of her home to smoke a cigarette. Her mother was upstairs with three children. Her brother, Anthony Farley, lived in the other half of the duplex.

Two men, wearing shirts with DEA printed on them, ran up to the porch, yelling DEA! and DEA survellance! They tried to handcuff Brionna. She fought them and started screaming. From post-gazzette.com, 18 July:

Her mother came downstairs and was confronted by a tall man wearing something white on his head, according to the complaint. The man pointed a gun at the mother and told her to lay face down on the stairs.

The two men then tried to drag Ms. Hicks out of the house, she said, at which point her brother, who lives in the adjoining half of the duplex, came to the front door.

The unidentified man shot her brother, Anthony Farley, in the neck.

Mr. Farley returned fire, striking the man, according to the complaint.

Brionna's brother, Anthony, ended up in the hospital. He will recover. His assailant ended up dead, on the porch.

The gunfight took place between the two doors pictured on the white duplex. It appears to be about 20 feet.

This illustrates a growing problem of criminals impersonating law enforcement officers to gain an advantage over their victims.

It was less of a problem when most police were uniformed and used official vehicles. Now many raids are unannounced, or use almost no warning in the service of a warrant.

One of the primary purposes of a warrant is to inform the person in charge of the premises to be searched that the officers doing the searching are doing so under due process of law. A search warrant protects both the owner of the premises and the police. Proper service of a search warrant also prevents searches of other premises or places not on the warrant.

An owner of premises does not have to allow police onto the premises unless they have a warrant.

The war on drugs has vastly expanded the use of "no knock" warrants, which have been issued promiscuously in recent years. The mere ownership of legal firearms has been used as a premise to issue a no-knock warrant.

It has become much harder for citizens to know if the people breaking down the door are police or criminals. If the police do not announce themselves, and wait for a reasonable time to have the person in charge of the premises look at a warrant and determine that it is valid, and what may be searched for, how is a person to know if the invasion of their home is occurring under the rule of law?

I was involved in a situation in Australia where premises were searched. The officers with the warrant were not present. A resident asked for the paperwork. It could not be produced. The resident refused them entry. The officers waited until the paperwork was present. They were allowed entry, and conducted their search.  That is the way most warrants should work in the United States.

U.S. courts have ruled that some warrants need not to be present for the person to be served and the search conducted. How is the person to know if the officials have a valid warrant or not, if they cannot see the document?

In many cases, they do not know.

Criminals that disguise themselves as police or other law enforcement are another reason use of no-knock warrants should be severely limited, and sufficient time given to occupants to respond to an announcement by police.

©2018 by Dean Weingarten: Permission to share is granted when this notice and link are included.

Gun Watch TOPICS: Government; Politics; Society
KEYWORDS: 2ndamendment; alquippa; anthonyfarley; banglist; brionnahicks; da; dea; impersonation; impersonators; nra; pennsylvania; police; secondamendment; warrant Navigation: use the links below to view more comments.
first 1-20, 21-40, 41-56 next last
One of the purposes of a warrant is to inform the person being served that the search is legitimate, and being conducted under due process.
1 posted on 07/26/2018 5:23:33 AM PDT by marktwain
[ Post Reply | Private Reply | View Replies]
To: marktwain

Scary stuff. Sounds like she would have been trafficked, or raped and dead. Thank God for the brother.

Does the phrase “actions have consequences” have any meaning to most Americans today?

If you drug-test both knuckleheads here....they both fail. The drugged-up guy has no concern about consequences...the stuff has melted their ‘compass’ and they can’t imagine being dead in twelve minutes.

You can go down the 500 shootings/killings of the past week from across the nation, and if the cops would just go and drug-test every single one of guys....they would all fail.

As it should be. When the police are acting like criminals the lines are often blurred and homeowners have no choice but to defend themselves. Mistaken identities/wrong addresses further complicate these issues.

The recent spate of GVRO/Red Flag laws passed in blue states will make this situation even worse. Anyone can now point his/her finger at someone and tell a cop, “He threatened me, he has guns, I’m afraid”; the cop goes to a judge, GVRO issued, no due process, and the po-po are banging on someone’s door with no warning whatsoever.

Confiscation, one gun owner at a time.

meanwhile they’ve been arrested and charged for attempting to shoot a DEA officer :\

My point was about stupid and corrupt policing, not drug-addled killers smart enough to imitate dumb policing methods.

And I generally am a great supporter of cops.

8 posted on 07/26/2018 5:51:50 AM PDT by miss marmelstein
[ Post Reply | Private Reply | To 4 | View Replies]
To: marktwain
Good.
No Knock searches are over the top, should not be used except maybe for VERY special cases when serving a warrant would be too dangerous.

“The war on drugs has vastly expanded the use of “no knock” warrants, which have been issued promiscuously in recent years. The mere ownership of legal firearms has been used as a premise to issue a no-knock warrant.”

You really can’t know whether it’s a home invader or a Fed when you’re woken up at 5AM and someone is shouting “DEA” or “FBI” or “police”! This policy of
“no knock” raids is obviously being copied by the regular criminals. Of course, this makes it more dangerous for the Feds and a positive feed back loop is created.

The morons at the DEA and other Federal agency should really re-consider the untoward consequences of their no knock raid requests. I really can’t have much sympathy for these Gestapo agents using Gestapo tactics so the Feds are reaping what they sow.

In WI, we even saw no-knock pre-dawn raids used as a means of collecting evidence by local Milwaukee police in a politically driven investigations driven by anti-Walker “East German” DA Chisholm

Not that it’s easy to do real-time, but if it’s only one or two people claiming to be cops breaking into a house, it’s probably a home invasion rather than a legit search, at least that’s what I see watching TV. For a no-knock, they do want and need overwhelming force.

Either way, it’s an ugly situation.

It strikes me as being kind of odd that the house and yard are fenced in.

Thresholds are so low for these raids that criminals and miscreants are calling police departments with fake information prompting the police to launch a SWAT raid based on a fake call.

It’s called SWAT-ing, and it wouldn’t work if police checked things out before sending in a heavily armed platoon and armored cars.

“It strikes me as being kind of odd that the house and yard are fenced in.”

Not odd or out of line in any way.

Hard to tell at 5AM when you’re waking up. That’s the point.

The regular criminals don’t really need to worry that their badges are fake when the victim is going from just waking up to tunnel vision.

16 posted on 07/26/2018 6:06:54 AM PDT by grumpygresh (Abolish administrative law. It's regressive, medieval and unconstitutional!)
[ Post Reply | Private Reply | To 11 | View Replies]
To: equaviator
It strikes me as being kind of odd that the house and yard are fenced in.

Kids and pets? We know there were 3 children.

The only reason for a “no-knock” warrant is that there is something on the other side of the door worth killing or dying for.
IMHO, “Flushing the evidence” is not a reason.
Otherwise, how do you tell a cop from a criminal?

This problem has a relatively easy solution. Any police warrant party should be required to have a marked police cruiser with them.

And the instant the cops go through the house’s door, that cruiser must turn its blue and red emergency lights on, and hit the siren. Let folks know that it’s really the police out there.

You can’t tell the difference between cops and robbers these days.