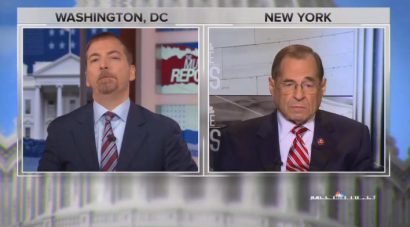 It might be safe to say that NBC political director Chuck Todd was invested in or, at least, very eager to have Democrats start actively chasing down President Trump via impeachment. After seemly trying to goad Congressional Democrats into starting an impeachment case earlier on Sunday, Todd grilled Congressman Jerry Nadler (D-NY) during Meet the Press on why he and party leadership had not done more to get rid of Trump.

Before getting to the House Judiciary Committee Chairman, Todd gave viewers a crash course in what the Special Counsel investigation found. And in true Chuck Todd-fashion, he put his own spin on the findings. “It describes a campaign eager to accept the help of a hostile foreign power, Russia, and a President who later worked furiously to obstruct the investigation.” If that was true, then why were charges not filed against the President, or at least a recommendation for them to be filed?

“You have all of this case of obstruction presented in the Mueller report as you've just stated. Some might ask, why haven't you start—why haven’t you opened an impeachment inquiry? Or, in fairness, is that what you’re right doing,” he pressed Nadler almost a half-hour later.

Todd wasn’t happy with Nadler’s explanation that Democrats were taking their time to make sure they had a case, to begin with. Talking over his guess (almost yelling), Todd grilled Nadler on the politics of chasing impeachment

They don’t have a case!!

A mug only pete buttigieg would love.

Maybe it’s because being elected while failing to be a member of the aristocracy is not actually a crime. And some people have noticed that the Democrats have done squat as far as their Constitutional duties go. Instead, they have been tilting at windmills with this bogus investigation. Too bad so many voters have no clue about the proper role of government; it is mind-boggling what they will vote for.

Dems want to impeach Trump because they know they cant beat him legit in 2020..that is the real motive..if they thought they could beat him in the ballot box they would say that but they cant

PDJT is goingto beat these Donk idiots like a drum.

I don't know anything about him. I never watch his program.

Ummmmmm, yes. He’s a punk too.

You haven’t missed anything...The azzhole hardly ever looks directly into the camera...My dad taught me that you NEVER trust anyone who won’t look you in the eyes...

Is Todd a moron?

I am so tired of hearing only those offensive voices!!!!!

The minute they try that, I hope we show them who we are and how many we are!! The amount Trump received after the mueller report came out.. doesn’t tell them anything?

They can’t think any less of Trump than I did obama.. and we withstood those awful 8 years. He created this mess we have today.. in every nook and corner... he was the one who put us in this position..
He thinks he is wise and knows how to be important... but he’s enptiy of wisdom but full of obamaism.

Please hurry and get the news out there who is next for investigation. and we have the documents for this one!!
It goes from the media to the White House .. obama and his administration... and the gov depts that were corrupted... it is so deep and so thick.. they almost pulled it off.

Looks like the south end of a northbound Baboon!

He’d probably love that which is behind and about 30” farther down a lot more.

All talk no action. Go ahead Jerry BagO Bagels let’s hope it coincides with indictments of key people from the FBI and Justice. All bluff unless there is a14 inch Dairy Queen cake at the end of the rainbow.

Hey you idiot Todd- do you know what precedent means? Whatever happens to Trump will happen to your guy. We will demand it.

They will make a case.

The "delay" is to time it closer to the 2020 campaign so they get maximum exposure.

What the establishment considers middle of the road objective journalism on display.

Nadless is in a box. He knows they don’t have a case and that most of the Dems don’t support a baseless impeachment distraction which will not sit well with the American public. On the other hand he’s not part of the new progressive/socialist wing of the party who will make his life miserable if he doesn’t do something, and might even face demands for resignation as chairman from his own party.

Plus he’s an unlikable dick who isn’t going to get sympathy from anyone on the right and quite a few on the left.

It’s really shocking how badly NYC’s DemonShit representatives and NY’s DemonShit Senators are disserving their constituents. NYC especially needs a lot of infrastructure repairs and upgrades that would hugely help its economy and the economy of the entire NE United States. If they were just willing to work with PDJT, a New Yorker himself, and do border security (also helping NYC a lot in the long run by reducing crime & welfare dependency) they could get a lot done on badly needed infrastructure work. Not only that but it would be done better, faster, and cheaper with PDJT’s help than they could do on their own.