The Democrats are facing a grim choice for 2020. Nominate someone who they fear can't complete a sentence and wanders off in his thoughts, or take one of the other contenders and face the prospect of an "electoral blowout" in the Rust Belt again.

International affairs professor Tom Nichols painted the Democrats' dilemma in the starkest terms. He first pointed out that Biden was never the kind of guy who "finished sentences; didn't get lost in his thoughts . . . He's always been gaffe-prone and a little uncertain."

Nevertheless, concluded Nichols, "are you going to go with that, or are you going to say, once again we're going to lose 100,000 votes in the Rust Belt, have a big electoral blowout? And that's the big concern."

Get the rest of the story and view the video here. 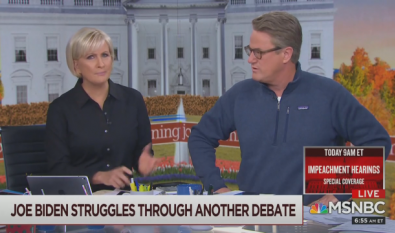 LOL: it’s dawning on Dems that their choice is between Blubbering Joe Biden, or one of the other candidates who will get blown away. Have fun!

Take Joe and have Trump repeatedly thrash him about the head and neck with inconvenient facts about Hunter.

Biden is no more electable

“Why didn’t you do something about these problems during your 47 years as part of the DC Swamp Joe”?

I’m beginning to think that bumbling Joe won’t be able to convince Dems to vote for him despite what the polls say.

And while we’re at it we need to beat domestic violence to a bloody pulp.

Biden can tell us all to punch out at violence against women. Add that to the long list of absurd things he has said.

Lord have Mercy
I just heard Chris Wallace say the dems think Hillary Clinton in 2016 “talked too much about Donald Trump and (ready for this?). Not enough about her own affirmative agenda for the country.”
We heard her agenda loud and clear I’d say

He is completely corrupt with foreign corrupt governments

So sick of hearing how he is somehow acceptable

But the worst offender is Laura Ingraham. ‘Oh I like Joe Biden. He’s kind of endearing.’

The Buttplug Stealth Candidate story isn’t working.
Without Biden, the DNC looses the Midwest AND $$$ from Wallstreet.
NV, CO, NM, MN will then be in play.

That’s exactly it. People really close to politics take the fact that Biden is leading in the polls as evidence that Biden is popular with Dem voters. But in reality most Dem voters, especially black ones, have not started paying attention at all to this election. Biden leads because they know the name.

They’re not going to vote for a communist, or a homo, and they know who Biden is, Obama’s VP, so he must be OK.

But the campaign season is long and Biden is bad, and his upside is very limited. They’re screwed. As vulnerable as Trump is, and I think he’s vulnerable and actually got lucky to win last time, the Dems have no good candidate in the race.

That’s my thought! She’s due.

Hahah, the reality is, they think Joe is their “great white hope” in the rust belt, and the reality is, he’ll get beaten hard here too.. just not as BADLY as the rest of the clown car....

There is NO PATH TO THE WHITE HOUSE FOR THE DEMS THIS CYCLE, regardless of their nominee...

Short of a complete economic collapse or some other black swan event of that magnitude before next November, there is not a single path for any Democrat to 1600 PA Avenue.

Joe will probably do the BEST of all of them, but none of them can win it... Best case for the Dems is about 15 states plus DC.... and honestly they are currently nowhere near a best case scenario.

Sadly for the DemocRATS.... Biden was their best bet. Nobody else in the field of fools stands a chance against the Donald and he will likely beat them all.

The establishment Democrats know it because to win, they need Trump voters to vote for them and Biden (as bumbling and stumbling as he is) is their best bet for that sort of miracle.

17 posted on 11/21/2019 9:36:23 AM PST by jerod (Nazi's were essentially Socialist in Hugo Boss uniforms... Get over it!)
[ Post Reply | Private Reply | To 1 | View Replies]
To: governsleastgovernsbest
There are enough corrupt black community precincts to swing state wide elections - but not enough to swing a Presidential election.

AND it turns out Hispanics often vote for what's best for the county - not just what lines their pockets... So Hispanics aren't as 'reliable' as the black community.

Yep, democrats have a problem - and their solution is to run someone totally incompetent - on the road to senility - to maintain their power. Take Bumbling Biden or Suffer a 'Blowout'!,' -

Joe knows what side he's on - let the country go down the drain... Biden will save corrupt white liberal garbage 'elites'... like Mika's friends...

Those who are really in charge of the Democrat Party must be in a dither. Mayor Pete is ahead in Iowa, but trailing badly in other states, particularly in the south. Fauxcahontas is ahead in the northeast, but not in others. I think Joe the groper is ahead in other areas. This is fun to watch. The attempt by the deep state to pull off a coup, not so much.