Ok, if you’re still sitting around worrying that Attorney General William Barr has gone all wobbly – even after yesterday’s pointed statements by he and U.S. Attorney John Durham in response to the IG Report – then I think I may have found your cure. Earlier today, MSNBC aired an interview involving one of their hack reporters and Attorney General Barr, and boy, is it epic. Mr. Barr is making no bones about his continued consistent views on what he bluntly still refers to as the “spying” on the Trump Campaign by the Obama FBI, and is not backing off even a little bit from his assessment of the contents of the IG Report.

Below is a clip of the first 3:17 of the interview, followed by a transcript. Watch and/or read, and if you don’t feel better after doing that, then I’m afraid there is nothing more I can do to help you.

Now, the Transcript, lovingly and laboriously prepared by we here at the Campaign Update for our audience made up mostly of voracious readers:

MSNBC Hack: Why do you say the FBI opened the investigation on the Trump Campaign on the “thinnest of suspicions?”

Barr: Well, I’m glad to get into the issue of predication, but let me just start out by saying that I think you have to put this in context. I think the heart of the IG’s report really focused on how the investigation was conducted once it got going, and that is especially the very serious abuses of FISA that occurred, much of which has in my view not been accurately reported by the press over the last day.

But, in one area I do disagree with the IG, and that was whether there was sufficient predication to open a full-blown counterintelligence investigation, specifically using the techniques that they did to collect intelligence about the Trump Campaign.

MSNBC Hack: W, w, well as a policy matter, why not open an investigation on a thin pretext? [Seriously???] I guess on the one hand you could say that it’s a presidential campaign, it’s very sensitive, you need better evidence. On the other hand, you could say, it’s a presidential campaign, we have to be very careful, it’s a threat to our political process.

Barr: I think probably from a civil liberties standpoint [Which liberals USED to be concerned about – remember?] the greatest danger to our free system is that the incumbent government use the apparatus of the state – principally the law enforcement agencies and the intelligence agencies – both to spy [!] on political opponents, but also to use them in a way that could affect the outcome of the election.

And we don’t automatically assume that the campaigns are nefarious and traitors and acting in league with foreign powers. There has to be some basis before we use these very potent powers in our core first amendment activity. And here, I felt this was very flimsy.

Basically, I think the Department has a “rule of reason” which is, at the end of the day, what you’re relying on – sufficiently powerful to justify the techniques you’re using. And the question there is, how strong is the evidence? How sensitive is the activity you’re looking at? And what are the alternatives?

I think when you step back here and say, what was this all based on?, it’s not sufficient.

Remember, there was and never has been any evidence of “collusion.” And yet, this campaign, and the President’s Administration has been dominated by this investigation into what turns out to be completely baseless.

Things to note in this:

Barr’s intentional and pointed use of the word “spy” to describe what the Coup Cabal did to the Trump Campaign. He knows this will cause Democrats and the media to fry their own brains. Epic.

Barr’s unqualified statement that “there was and never has been ANY evidence of ‘collusion.'” That tells you that he – and presumably also Durham – simply do not accept that there was ANY premise at all for operation “Crossfire Hurricane” to begin in the first place, nor was there ANY reason for the appointment of a special counsel, much less a two-year-long investigation by Mueller. That is bad, bad news for not just Comey, Strzok, Page and McCabe, but also for Mueller and Rosenstein, who made the decision to appoint Mueller based on…nothing.

Also very interesting is this statement’s phrasing: “… the greatest danger to our free system is that the incumbent government use the apparatus of the state…”. The use of the words “incumbent government” rather than the more limited “Department of Justice,” or the even more limited “FBI” is very, very interesting, and implies that Barr and Durham are not limiting their investigation to those outside of the Obama White House, but may well be looking inside it as well. Boom, if so.

Then there’s the seemingly gratuitous noting of the fact that “…in most campaigns there are signs of illegal foreign money coming in.” Think about that one: Which two recent campaigns have been most prominent in having allegations of benefiting from foreign money? If you said “the Barack Obama and Hillary Clinton Campaigns,” you win the prize.

William Barr is a man with a well-earned history of choosing the words he uses carefully and with intent. He doesn’t just shoot his mouth off in public without giving a lot of forethought to exactly what the message is that he wants to convey.

There are a lot of very powerful messages directed at the bad actors from the Obama years in that short three-minute clip.

Those messages are also directed at those of you who still doubt Mr. Barr’s real intentions here. Are you listening?

Heads had to be expolding all over MSN and NBC that they broadcast this.

Thanks for posting this. I think anyone who doesn’t think Barr is going after these bastards is not thinking right.

Rush was just playing snippets of Barr’s interview. Barr said Durham will have the last word when his investigation is over.

Barr pushing the Durham “report” into next summer makes this a political issue for 2020 and not a criminal one.

As expected he is covering for the GOP establishment who do not want to have to defend prosecutions of criminal Democrat coupists by the Trump admin. 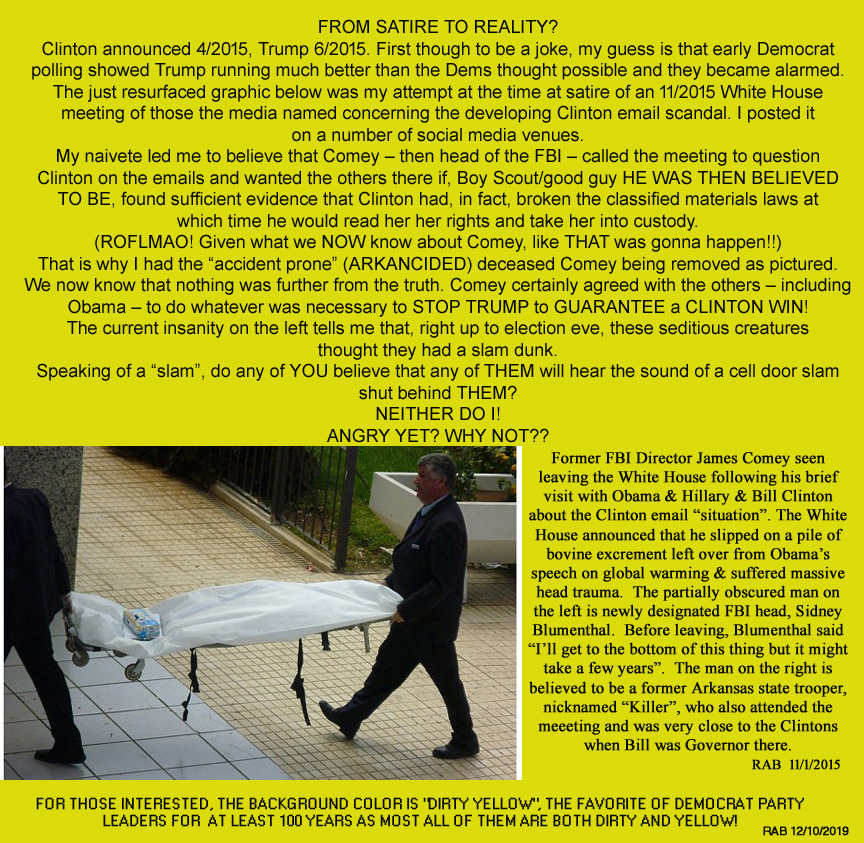 Yes he did and you don't believe him.

I say, I'll wait before I hang him.

Let's have a trial and see "WHAT HAPPENS".

Barr and Durham are my last hope and I won't give it up before I see the results.

Thanks for posting. We’ll have to see if Billy Bagpipes blows it.

Words can be powerful things.

That would be good timing for the conventions and the election.

All I can say is we’d better see several high-ups indicted, prosecuted, convicted, and jailed: at minimum Comey and Brennan. Obama should be too but that’s probably too much to expect.

Watergate was basically an attempt by the White House to investigate things that were going on in the Democrat presidential campaign, although that turned out to be just a cover story for something else involving the personal romantic interests of John Dean.

That ultimately caused a credible case for impeachment of a President, turned the country’s political process upside down for almost two years, and caused a swing to the left in American politics, the American media, and the American culture that lasts to this day, 44 years after the events of Watergate ended.

What Obama and his White House did against Donald Trump was immeasurably worse. The Watergate break-ins were done by a small group of individuals who were working in the White House but were actually employees of the CIA and FBI. The didn’t involve national intelligence policy or department-level management of either agency.

What Obama did was employ large sectors of law enforcement, counter-espionage, and the “intelligence community” as an “insurance policy” to make sure that the Democrats won the 2016 political race.

Almost no comparison, yet the Obama people appear to be getting off scot-free, and have succeeded in getting Trump investigated for what they did. The MSM is loving every minute of it, and has completely bought into the Democrat narrative.

I don't think that's the case. Some months ago either Barr or Durham said their inquiry has become a CRIMINAL investigation. I can understand it takes that long to get the evidence to indict. It's a very complicated matter with a lot of players.