It may be difficult to believe in this enlightened age but there was a time not so long ago when the National Review was the intellectual heart of America's conservative movement. Its writers were sharp, gifted and irreverent. Their appearances on Fox News and other TV outlets made them rock stars.

All that ended on January 22, 2016, when the magazine posted online its "Against Trump" issue. Once again, the editors proudly chose to stand athwart history rather than make it. They chose to lose with what they consider honor rather than win.

22 writers signed on, each penning a small missive which was published inside.

The magazine's editors did not like him. They called him a witless ape and buffoon and even attacked his wife's looks. Later, they portrayed his supporters as little Nazis in a piece called the Father Fuhrer.

The main editorial said, "Donald Trump leads the polls nationally and in most states in the race for the Republican presidential nomination. There are understandable reasons for his eminence, and he has shown impressive gut-level skill as a campaigner. But he is not deserving of conservative support in the caucuses and primaries. Trump is a philosophically unmoored political opportunist who would trash the broad conservative ideological consensus within the GOP in favor of a free-floating populism with strong-man overtones.

"Trump’s political opinions have wobbled all over the lot. The real-estate mogul and reality-TV star has supported abortion, gun control, single-payer health care à la Canada, and punitive taxes on the wealthy. (He and Bernie Sanders have shared more than funky outer-borough accents.) Since declaring his candidacy he has taken a more conservative line, yet there are great gaping holes in it.

"His signature issue is concern over immigration — from Latin America but also, after Paris and San Bernardino, from the Middle East. He has exploited the yawning gap between elite opinion in both parties and the public on the issue, and feasted on the discontent over a government that can’t be bothered to enforce its own laws no matter how many times it says it will (President Obama has dispensed even with the pretense). But even on immigration, Trump often makes no sense and can’t be relied upon. A few short years ago, he was criticizing Mitt Romney for having the temerity to propose 'self-deportation,' or the entirely reasonable policy of reducing the illegal population through attrition while enforcing the nation’s laws. Now, Trump is a hawk’s hawk."

The argument was that 1. you cannot trust anything that he says, and 2. look what he is saying!

Later, the editorial said, "If Trump were to become the president, the Republican nominee, or even a failed candidate with strong conservative support, what would that say about conservatives? The movement that ground down the Soviet Union and took the shine, at least temporarily, off socialism would have fallen in behind a huckster. The movement concerned with such 'permanent things' as constitutional government, marriage, and the right to life would have become a claque for a Twitter feed."

I had forgotten that the idea that electing Donald Trump president upends a constitutional government is not original to Democrats.

The National Review ended its suicide note, "Some conservatives have made it their business to make excuses for Trump and duly get pats on the head from him. Count us out. Donald Trump is a menace to American conservatism who would take the work of generations and trample it underfoot in behalf of a populism as heedless and crude as the Donald himself."

Four years later, we have completed the first three years of this Magnificent Age Known as the Trump Years.

MAGAPILL has catalogued the successes.

Thousands of regulations are gone. 170 conservative judges are appointed, confirmed, and doing the Lord's work.

Tax rates are lower and the economy is expanding. Unemployment is at a 50-year low. Wages are at an all-time high. Retirees are enjoying huge growth in their investments.

Mexico protects our border while we build a wall.

Everything the writers at National Review said they wanted done, he's done.

A conservative publication by now would have admitted it was wrong, apologized, and celebrated.

These witless apes want him impeached. On the fourth anniversary of its suicidal Against Trump editorial, the magazine's staff ran an editorial, "Impeachment Doesn’t Require a Crime."

I was correct. The National Review now serves no purpose other than as a platform for an occasional column by Conrad Black or Victor Davis Hanson.

How odd that the people who called for losing with dignity do not have the dignity to own up to their error, which has aided and abetted the critics and opponents of the most conservative president since Reagan.
TOPICS: History; Politics; Society
KEYWORDS: 2020election; againsttrump; conradblack; dnctalkingpoint; dnctalkingpoints; donsurber; election2020; fatherfuhrer; gopestablishment; impeachment; marchforlife; massachusetts; mediawingofthednc; michigan; mittwit; nationalrepuke; nationalreview; nevertrump; nevertrumpers; partisanmediashills; plannedparenthood; presstitutes; rinos; smearmachine; tds; uniparty; utah; victordavishanson Navigation: use the links below to view more comments.
first 1-20, 21-40, 41-60, 61-69 next last
1 posted on 01/26/2020 2:45:57 PM PST by SeekAndFind
[ Post Reply | Private Reply | View Replies]
To: SeekAndFind

I have heard rumors that NRO is one RINO mega-donor away from extinction. 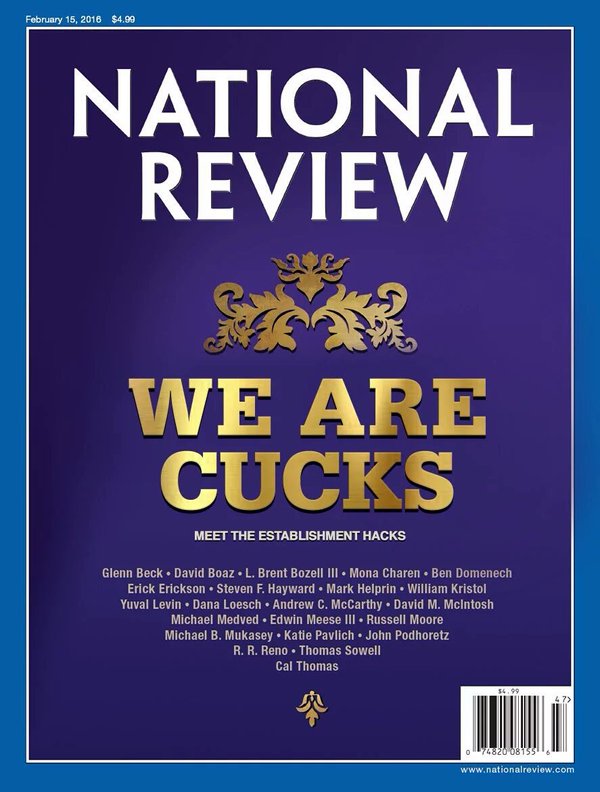 The National Review is the press representative for establishment Republicanism - losers who are useful mostly as punching bags for Democrats.

Not missed for a minute.

I think of the authors on that cover, the following are now NOT #NeverTrumpers and have realized their mistakes:

Should have gone the way of the Weekly Standard. Intellectual elites have no honesty and are too ashamed to admit it.

National Review came out against Any Rand. This resulted in Any Rand carefully checking the guest list of any party she was invited to. If William F. Buckley was there she would not go.

9 posted on 01/26/2020 2:59:02 PM PST by Nateman (If the left is not screaming, you are doing it wrong ...and Epstein did not kill himself.)
[ Post Reply | Private Reply | To 1 | View Replies]
To: SeekAndFind
I think of the authors on that cover, the following are now NOT #NeverTrumpers and have realized their mistakes:
Andrew McCarthy Cal Thomas Glenn Beck Katie Pavlich L. Brent Bozell III

“Its writers were sharp, gifted and irreverent.”

“Its writers were sharp, gifted and IRRELEVANT.”

Maybe, but I will never forget.
They will always be suspect.

I say good riddance. That issue turned me off to them for life.

I subscribed to the mag for a couple of years and Buckley was still running it. I got turned on to it by Rush, and read every issue in its entirety.

The beginning of the end came when Jonah Goldberg was put in charge of National Review Online. That dude ain’t right in his head. I never understood why he had such a good rep as a writer because I found his righting sophomoric. About on the level of a writer for a high school newspaper.

I really want them to fold....or better yet, be sold. To a group that has true conservative values.

True. In fact they are now some of Trump’s strongest, most effective supporters.

The inability of Sowell to recognize the genius of Trump given his large body of work in discerning economic trends was a revelation to me because I realized that lowly little old me had greater insight and better judgment than the best of the conservative elites. I realized why the conservative movement had always lost ground even though libraries full of conservative screeds had been written and published over the years. The fact of the matter was the conservative movement had its own ivory tower intellectualloids just like the Marxocrats but the Marxocrats had a kick ass sensibility and shock troops to foist their crap on weak and trembling conservatives. We had no general who could control the battlespace practically forever. Even Reagan couldnt do what Trump is doing. Trump is a phenomenon who is like George Washington or even Julius Ceasar. We will never see his like for a hundred years.

It’s not fair to try to compare Trump to Reagan. Reagan’s overarching mission was to weaken and destroy the Soviet Union. Everything else was secondary to him, and he was willing to compromise to maintain that focus. Even so, he accomplished additional great things. As with all who followed him, Trump is the beneficiary of Reagan’s greatness, and governs in a world far different than that Reagan inherited. Both are great Presidents, for whom we should be very grateful.

National Review had committed suicide long before that date.