There is nothing small about Mini-Mike’s ego. As the billionaire oligarch continues his attempt at a leveraged buyout of the Democrat Party and its presidential nomination, there is no bigger factor getting in his way than his own unbearable arrogance. Let’s go through the highlights of what we have heard from the former Mayor of New York City in just the past week:

Stop and Frisk – A week ago today, video leaked of a 2015 speech in which Bloomberg, then 3 years removed from his final day as Mayor, bragged to an audience in the starkest, and most racist of terms about the “stop and frisk” policy he employed in the city’s minority neighborhoods:

That video gave us, in part, this infamous quote:

And look, the way you get the guns out of the kids’ hands is to throw them up against the walls and frisk them.

Bloomberg’s hostile workplace for women. – In a February 15 piece – that it very interestingly chose not to hide behind its famous pay wall – The Washington Post detailed Bloomberg’s years of dealing with dozens of lawsuits field by female employees over the hostile workplace he created and maintained at his computer and media operations.

The piece, which is at least 3,000 words long, goes into great detail about Bloomberg’s demeaning treatment of women in his workplaces, a pattern that apparently went on for decades. Here is just one of the examples of Mini-Mike’s brutish behavior detailed in the article:

Garrison complaint 89. On April 11, 1995 at approximately 11:20 a.m., Bloomberg was having a photograph taken with two female Company salespeople and a group of N.Y.U. Business School students, in the company snack area. When Bloomberg noticed Garrison standing nearby, he asked, “Why didn’t they ask you to be in the picture? I guess they saw your face.” Continuing his penchant for ridiculing recently married women in his employ, Bloomberg asked plaintiff, “How’s married life? You married?” Plaintiff responded that her marriage was great and was going to get better in a few months: that she was pregnant, and the baby was due the following September. He responded to her “Kill it!” Plaintiff asked Bloomberg to repeat himself, and again he said, “Kill it!” and muttered, “Great! Number 16!” suggesting to plaintiff his unhappiness that sixteen women in the Company had maternity-related status. Then he walked away.

Mini-Mike promotes death panels! – Here is Bloomberg explaining to a family how he would reduce healthcare costs by just sentencing the elderly to death:

Roscoe B Davis🎖⭐️⭐️⭐️ @RoscoeBDavis1 .@MikeBloomberg explaining how healthcare will bankrupt us, unless we deny care to the elderly.

A young person, we should do something. Society’s not willing to do that, yet.”

All of these costs keep going up. Nobody wants to pay anymore money. And at the rate we’re going healthcare is going to bankrupt us. So not only do we have a problem we’ve got to sit here and say which things we’re going to do and which things we’re not. Nobody wants to do that. If you show up with prostrate cancer and you’re 95 years old, we should say go and enjoy, you’ve had a long life, there’s no cure and we can’t do anything. If you’re a young person, we should do something about it. Society’s not willing to do that, yet.”

I swear I don’t make this stuff up – who could?

Bloomberg on how farmers lack “grey matter.” – Today, we have the leak of this video in which Mini-Mike – who has likely never stepped foot on an actual farm in his entire life – tells an audience that he personally could teach anyone how to be a farmer, and expounds on how the tech industry requires the “grey matter” that farmers apparently lack:

James Woods ✔ @RealJamesWoods Well, the hard-working American farmers and machinists mocked by diminutive billionaire #MichaelBloomberg for being bereft of “grey matter” may have a few thoughts walking into the voting booth this November. #MiniMike

Yet, despite all of this unbearable arrogance, the unbridled hubris this small man puts on display pretty much every day of the week, liberal women and men stand ready, willing and most certainly able to sell their souls – and their favorite political party – to this despicable human being.

Democrats: If they didn’t already exist, no one in their right mind would ever dream of inventing them.

TOPICS: Conspiracy; Humor; Politics; Society
KEYWORDS: bloomberg; fakenews; mediabias; mikebloomberg; minimike; trump; trumpwinsagain Navigation: use the links below to view more comments.
first 1-20, 21-25 next last
1 posted on 02/17/2020 6:47:52 AM PST by EyesOfTX
[ Post Reply | Private Reply | View Replies]
To: EyesOfTX
Yet, despite all of this unbearable arrogance, the unbridled hubris this small man puts on display

The evil SOB not only has a “black” and a “women” problem,
He has a “Jewish and a Christian” problem as well...dating back to 2012:
https://www.nycreligion.info/mayor-bloomberg-closes-22-manhattan-worship-services-today-list/
Mikey Mouse is a god-less, evil tyrant wanting to control every aspect of American life.

If you are raised like a little prince, I guess you are really pathetic. His childhood must have been very lonely.

I’d say “unbelievable” is the more appropriate word for this scmuck.

That's the goal, though.

Bloomberg talking about how all the crime is committed by black and brown people.

7 posted on 02/17/2020 6:58:02 AM PST by TheTimeOfMan (The Eloi unexpectedly protected the Morlocks from rogue Eloi as they themselves prepared to be eaten)
[ Post Reply | Private Reply | To 4 | View Replies]
To: EyesOfTX
#Mini Mike, I can just buy and bury you bitches! 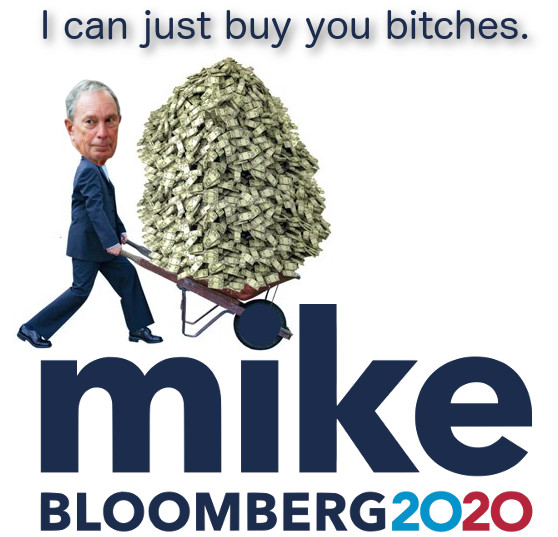 Thanks to Bon mots for the above reality. 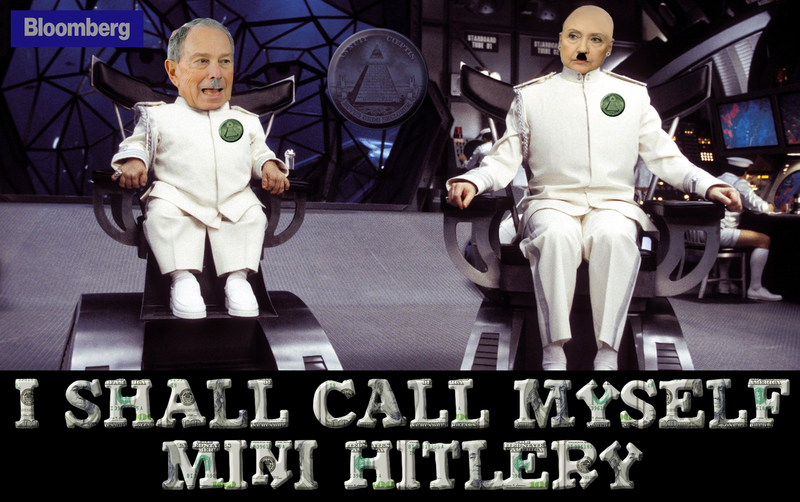 But wait there is more! Bloomberg makes a whole lot of his money from business with China. Just how much influence do the bad guys have over him?

9 posted on 02/17/2020 7:00:02 AM PST by Nateman ( Unless the left is screaming you are doing it wrong.)
[ Post Reply | Private Reply | To 1 | View Replies]
To: EyesOfTX
Watching Kellyann Conway school Chris Wallace yesterday about Bloomberg v. Trump with women:

Kellyann: I've worked for Donald Trump for four years, he's the best boss I've ever had.

Wallace: Women working for Bloomberg could say the same thing.

Kellyann: Then let them come forward and say it....

Good tag line. Make a meme out of it.

Trump would love to go up against mini mike. Trump knows all his warts.

Biden and Warren are dead dems walking. Mayor Pete maybe in 2024. Its the Bernie fanatics that are left.

Thanks for posting. Wallass is insufferable and I avoid him like a bad case of hives...

He was right about minorities committing almost all of the violent crime. But he is now in process of repudiating his former statements, and I have lost all respect for him. He is eager to become a True Democrat, and as a True Democrat, he has no core principles and will say anything to get elected.

One thing we must never allow is a president who is perceived by anyone as being arrogant.

The exchange with the pregnant woman where he forcefully told her to kill her baby is particularly disturbing. If this really happened...what a little monster he is.

It’s good to get the word out on this guy. Get it all out.

I will thank God when I never have to see another ridiculous Bloomberg campaign ad.

*IF* he is able to corruptly buy the Democrat nomination, he will get crushed by Trump in November.

The Bernie Bros, lots of Blacks, Farmers/Blue Collar industrial workers, plenty of women.....will all either vote for Trump or sit out the election.

No Democrat can hope to win without the wholehearted support of all of the above.