Karl and his Democrat colleagues are using the current crisis to push for mail-in voting. This is something Democrats desperately want to make into law because they know it’s easier to cheat that way.

President Trump told Karl “no” because people cheat with mail-in voting. Jon Karl: Do you think every single state in this country should be prepared for mail-in voting?

President Trump: No, because I think a lot of people cheat with mail-in voting. I think people should vote with voter ID. I think voter ID is very important. And the reason they don’t want voter ID is because they intend to cheat. When you buy something you look at your cards and credit cards and you have your picture on many of them. Not all of them but many of them. You should have a picture for voting. It should be called voter ID. And it shouldn’t be mail-in. Excuse me. It shouldn’t be mail-in voting. You should go to a booth and you proudly display yourself. You don’t send it in the mail where all sorts of bad things can happen by the time they sign it, if they sign it. By the time it gets and its tabulated. No, it shouldn’t be mailed in. You should vote at the booth and you should have voter ID. Because you have voter ID that’s the real deal.

If the coronavirus is still killing thousands of people a day in October this country’s economy will be finished. Democrats won’t have to worry about mail-in voting. 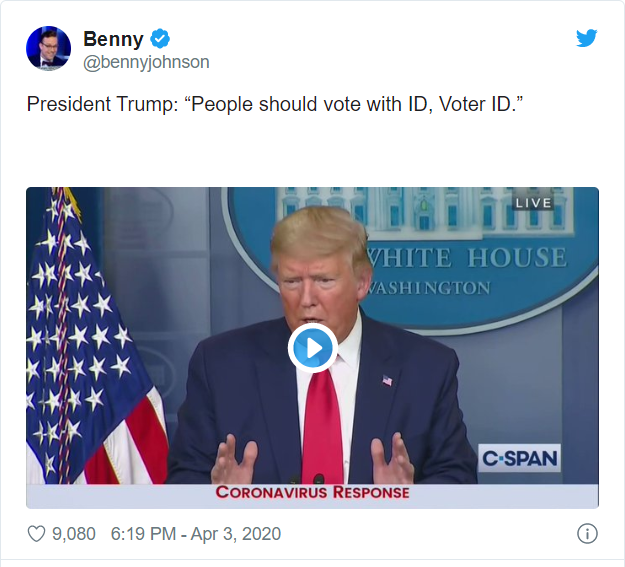 Don’t worry. If your ballot goes missing, the DNC has offices nationwide to replace it. No need to call—they’re on the case! Free of charge!

“But my seventy years of voting means I know better than you millenials.”

ANOTHER post pointing out the obvious-to-all-who-care-to-look guarantee of FRAUD in mail in ballots.

Show up on appointed day, at the appointed place, show id and vote.

ONLY uniformed, active military can use an alternative. Too sick? Too far away? Too old? Too tired? Too stupid?
Too bad.

For everybody else, get out and vote.

Usually it’s the states that make the decisions on the voting process. Washington, Utah and several other states do have mail in voting all ready. For the Federal government to mandate that all states do this would require an act of congress and a modification of existing federal laws including a perhaps Constitutional Amendment.

Article I Section 4.
The times, places and manner of holding elections for Senators and Representatives, shall be prescribed in each state by the legislature thereof;

Wasn’t there a story years ago about some Florida democrat having a thousand or so in the trunk of his car? Anyone who doesn’t know democrats do voter fraud isn’t watching their priorities...

9 posted on 04/12/2020 3:47:22 PM PDT by Captainpaintball
[ Post Reply | Private Reply | To 1 | View Replies]
To: E. Pluribus Unum
I know a guy who mailed in his Buttigieg-marked ballot before primary day and, as we all know, Buttplug dropped out. This guy went to the polls, explained what had happened, and they handed him a new ballot. No ID asked for, no proof he was a resident of that district, nothing. And, of course, his old ballot still existed (poll workers said it would be "trashed" and wouldn't count. Yeah, right. How would it ever be found and who would take the time to do so?).

So this die-hard CNN-watching "there is no vote fraud" true believer voted twice. His Buttplug vote didn't count but he got a chance to vote on another Dem, and you can be sure he checked boxes on all the other races on both ballots.

If he was so inclined he could have done this at every polling station in his city, in his county, and beyond.

The Kenyanesian Usurper belongs in prison.

How do they know they are missing?