Sharpton has a long record of using racist and antisemitic rhetoric. Many Jews blamed him for exacerbating mob violence against the Jewish community in New York in the 1990s.

More recently, Sharpton led protests against the 2012 death of black teenager Travyon Martin, which he and fellow activists cast as racially motivated, marking the beginning of a decline in race relations that has lasted several years.

Hardly anyone blinks an eye at the Rev. Al Sharpton’s racist statements, such as: “White folks was in the caves while we (blacks) was building empires. … We built pyramids before Donald Trump ever knew what architecture was. … We taught philosophy and astrology and mathematics before Socrates and them Greek homos ever got around to it.”

Sharpton again: “So (if) some cracker come and tell you ‘Well, my mother and father blood go back to the Mayflower,’ you better hold your pocket. That ain’t nothing to be proud of. That means their forefathers was crooks.” Sharpton also offered, “If the Jews want to get it on, tell them to pin their yarmulkes back and come over to my house.”

Despite such racism, President Barack Obama has made Sharpton his go-to guy on matters of race. But not to worry. Obama himself spent 20 years listening to the Rev. Jeremiah Wright’s anti-Semitic and racist sermons. The news media and intellectual elite don’t condemn Sharpton or Obama, because they have two standards of behavior: one for whites and a lower one for blacks.

A video of Al Sharpton re-surfaced recently and it shows his real character.

As Defiant America reported it has taken 25 years for this video to surface, but finally, there is proof of Sharpton’s hatred towards whites. Back in 1992, Sharpton was speaking at Kean College, when he was recorded endorsing the killing of policemen and women as well as white people.

Here’s the incriminating video, proving that Al Sharpton is a bigot and a total idiot for thinking this crap was never going to come to the surface.

It’s scary to think that the mainstream liberal media has taken over so much of our news, but in outing criminals like Sharpton, we can take back our America. The time has come to fix the major issues in the United States, starting with spreading the truth to the people. We can’t let racists like Sharpton get away with this type of behavior any longer. Partial transcript: All the Panther lovers, all the do or die, all the (indecipherable) negroes in Plainfield. I didn’t see them stand up and do nothing. All the ‘I don’t believe in marching. I don’t believe, I believe in offing the pigs.’ Well they got pigs out here. You ain’t offed one of them.

What I believe in I do. Do what you believe in. Or shut up and admit that you’ve lost your courage and guts to stand up.

‘I ain’t having no march. I believe in fighting.’ Well fight then. Nobody holding you. ‘I’ll off the man.’ Well off him. Plenty of crackers walking right around here tonight. Ain’t nobody come out and knock the gun out of your hand.

In the 2020 Democratic Party presidential primary, Sharpton has emerged as a kingmaker, as virtually every one of the candidates has courted his favor — speaking at his conferences, meeting him for lunches in Harlem, and so on.

But should the leaders of our country justify Sharpton’s racist rhetorics?

We should condemn racism everywhere!

Multiethnic societies are inherently unstable, and how we handle matters of race is contributing to that instability. Decent Americans should see the dangers posed by America’s race hustlers, who are stacking up piles of combustible racial kindling, ready for a racial arsonist to set it ablaze.

Ironic with every liberal starting any message about Trump with “he’s a racist” find the biggest real racist in the middle of their camp spewing his hate around the country.

This is a msnbc talk show host. Where’s the outrage? Where’s the calls for him to be cancelled?

You knew I was a snake when you picked me up.

Of course there are many ‘black leaders’ that also embrace such notions.

Al’s no more a “Rev.” than I am. He has never gone to divinity school, never had a church, never had a congregation. He was “ordained” by a DC preacher when he was 10 years old and has maintained the lie ever since. Even worse, he always seems to come down one the wrong side of the argument (e.g., Tawana Brawley, The Duke Five), yet never admits he is wrong. He is a fraud looking for a photo op. 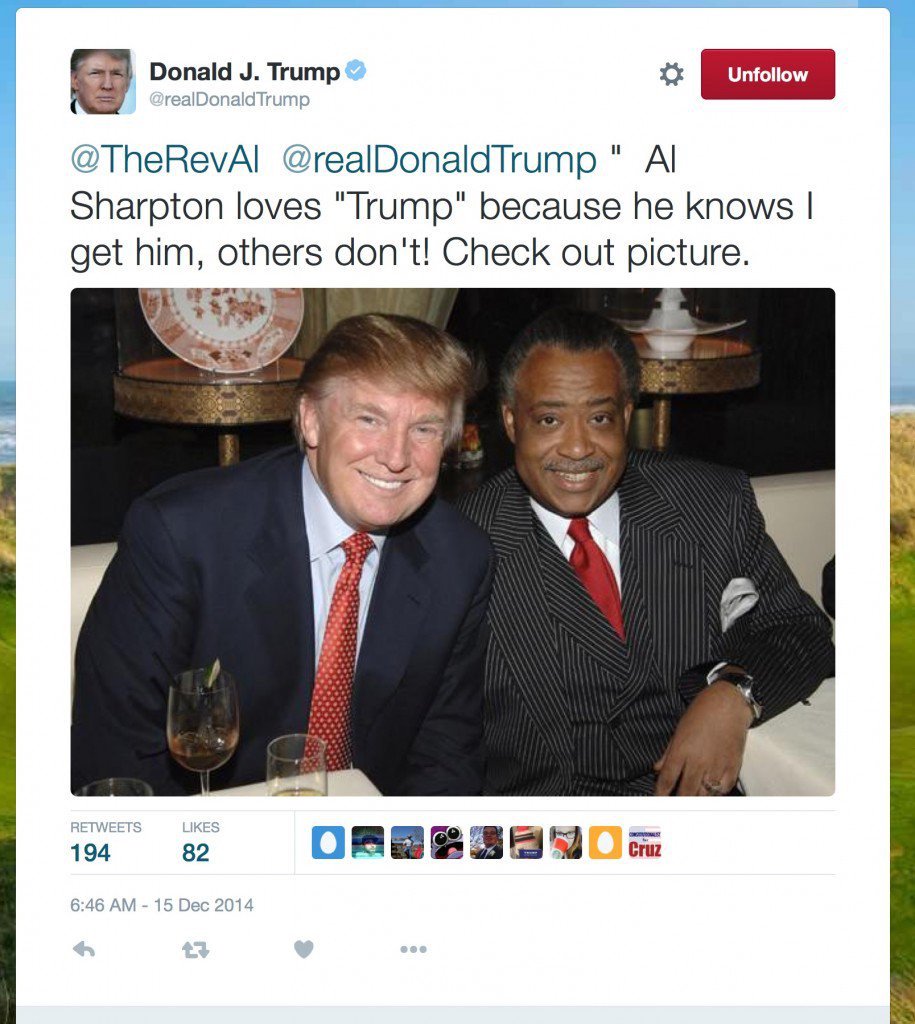 7 posted on 06/08/2020 6:17:32 AM PDT by dfwgator (Endut! Hoch Hech!)
[ Post Reply | Private Reply | To 5 | View Replies]
To: USA Conservative
“White folks was in the caves while we (blacks) was building empires. … We built pyramids before Donald Trump ever knew what architecture was. … We taught philosophy and astrology and mathematics before Socrates and them Greek homos ever got around to it.”

I think Al is confusing middle eastern genetics with those of sub-Saharan Africans.

Good photo of Trump and his wine glass of Diet Coke.

For one when I have been called a Cracker I politely say thanks but that is not really who I am. If further confronted I explain how the term came into being and it floors them. The Cracker was the one with the whip who disciplined the slaves. Essentially they are informing you that you are superior to them and not even knowing it.

Calling Sharpton Reverend is like calling a turd a bon bon.

One may look at these protests as pro-black....but they are truly anti-white.

Floyd...truly sorry it happened....but let's look at the beginning. The cop surely didn't deliberately kill him.

He’s half the man he used to be.

“But resist, we much… we must… and we will much… about… that… be committed.”

Where is the IRS?

So the question is, who were these ancient Egyptians?