Here are the twelve choices:

Demisexual: no sexual attraction toward any person unless they become deeply emotionally or romantically connected to someone

Asexual: does not experience sexual attraction

Straight: attracted to opposite sex

Gay: male attracted to other males

Bisexual: attracted to both sexes

Lesbian: female attracted to other females

Questioning: not sure of sexual orientation

Queer: someone who does not conform to traditional sex or gender norms

Pansexual: sexual or emotional attraction, desire, or romantic love toward people of any sex or gender identity

Straight, lesbian, gay, bisexual, heteroflexible, homoflexible, asexual, and pansexual appear to be mutually exclusive. If you’re one of these eight, you can’t be another one at the same time.

For example: If you’re a lesbian, you can’t also be straight. Of course, you could be a woman who is attracted to both sexes, but then you would choose the “bisexual” option. If you’re mostly straight with a little bit of homosexual activity or mostly gay with a little bit of heterosexual activity then you’re heteroflexible or homoflexible, and those are separate options, too.

If you’re asexual, none of the other twelve options apply to you because you’re not sexually attracted to anyone of any gender or for any reason — except for maybe the “questioning” option, which could be used to describe people who think they’re asexual but aren’t entirely sure. An asexual person could also select the “queer” option — after all, asexuality obviously doesn’t conform to what people consider “traditional” norms — but that also makes the use of the word “queer” redundant in the first place.

There is one potentially feasible way that someone could select five orientations and have it be an accurate description: Someone could perhaps choose one of the eight mutually exclusive sexual attractions (gay, straight, bisexual, pansexual, heteroflexible, asexual, and pansexual) and combine it with the other four that aren’t necessarily mutually exclusive (sapiosexual, questioning, demisexual, and queer.)

For example, a gay person could maybe also be sapiosexual, questioning, demisexual, and queer: That would be a man who is attracted to other men but only once there is a strong emotional romantic connection and mostly attracted to intelligence-based aspects of that bond& but not sure about it and also throws on the word “queer” to clarify that he doesn’t conform to sexual norms. But if you identify as “gay sapiosexual demisexual questioning,” isn’t clarifying that you don’t conform to traditional sexual or gender norms kind of unnecessary?

There are also more than 20 new options for gender.

OKCupid has only made the feature available to a select number of users so far. It has not stated whether or not it will open the feature to all users or make it permanent.

— Katherine Timpf is a reporter at National Review Online.

There are two sexes, male and female. Everything else is just a construct.

Now a family can have 5 kids: one of each.

Well there ya go. Number 10 eliminates 8 out of the previous 9 choices.

So, I’m guessing...the most important question to ask is no longer “What are you wearing?”.

How about just “walking petri dish”? 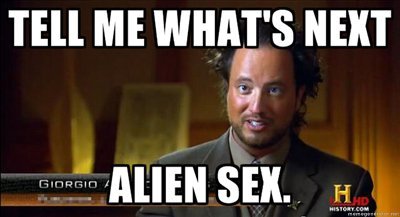 These guys only have 12 choices or combinations? They are hopelessly behind the times. And also bigoted I’m sure to not realize there are 56 orientations people can have....... I wonder if the opening is 3 feet off the ground? Ents come from somewhere....

I considered posting a picture of a lamprey, but some things are just too disturbing.

You can easily cut it down to one all inclusive acronym to cover every option:

She
He
It or
Transgender.

Maybe they think it’s only kinky the FIRST time. :)

Nice picture. Why is a married women on OKCupid? Are they also promoting infidelity?

They could boil it down to just two: “Normal” and “Screwed up”

Subsidize insanity and you get more of it . . .