A pile of headless corpses and a tyrant ruling France. Outcome of the French Revolution:

The French Revolution was the greatest disaster to befall Western Civilization since the Black Death. Almost all the ills of the modern world can be traced to it and the so called Enlightenment.

The height of the madness...the execution of the Carmelite Nuns of Compiegne.

Absolute pure evil the French Revolution. Up there with the Holocaust and the Russian and Chinese Communist takeovers in terms of cruelty and barbarism.

Bastille Day brought great suffering to France and did damage to the world that continues to this day.

The same may soon be said of Obama’s Iran Deal

Doesn’t Jade Helm 15 fire up tomorrow? Interesting that the date chosen is the day after Bastille Day.

If there’s one thing the leftists love, it’s symbolism.

10 posted on 07/14/2015 10:46:30 AM PDT by rarestia (It's time to water the Tree of Liberty.)
[ Post Reply | Private Reply | To 1 | View Replies]
To: Don Corleone
Egalitarianism, as reflected by the Jacobins, Marxists, Bolsheviks & Obamanists in America, is the most virulent expression of a Compulsion For Uniformity.

If you take a closer look at most of the really egregious attacks on innocent people in recent centuries, they can be attributed to this sort of mania. One must understand the phenomenon in order to effectively resist it.

They also have the “Fete de Feet” which is a celebration of toe jam.

RE: The French Revolution was the greatest disaster to befall Western Civilization since the Black Death

For those who are interested in the far reaching effects of the French Revolution.... many of the Communist intellectuals in China, Vietnam and Cambodia actually STUDIED in France and were INFLUENCED by the ideas emanating from this period.

They then took these ideas and IMPLEMENTED THEM back home.

The Cultural Revolution of China, The Vietcongs and the Killing Fields of Cambodia are the intellectual grandchildren of the result of Bastille Day.

THE HEIGHT OF THE FRENCH REVOLUTION 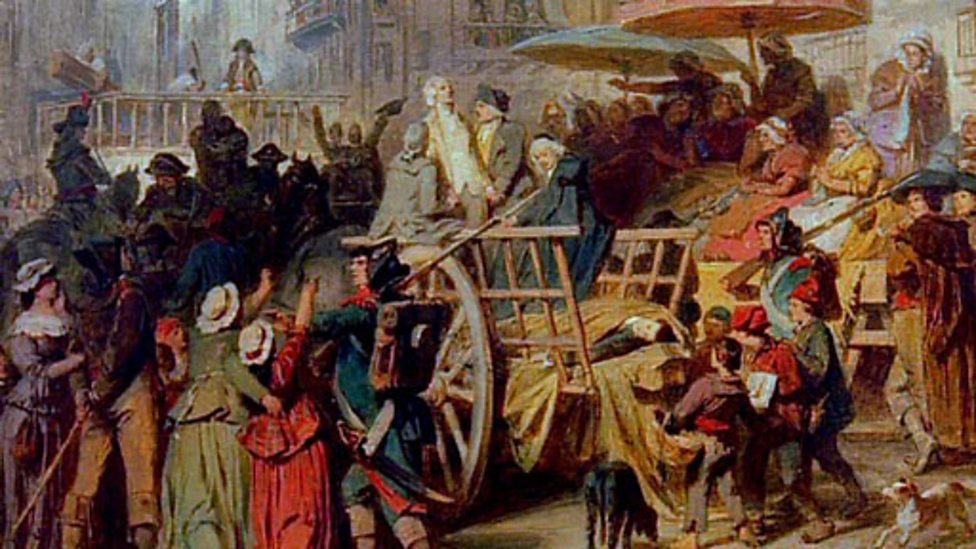 And the theft of some fish!

I’m too late for the RUSH song (first thing I thought of).

Of course as with most Liberals, Bastille Day is glorified.

I forget which book it was - but the author made the point how almost all of the revolutions in history end up like the French Revolution, and rarely (never?) end up like the American Revolution. Another reason why, IMHO, I think ours was blessed by God.

Along with their musloid pals.

“It is now sixteen or seventeen years since I saw the Queen of France, then the Dauphiness, at Versailles; and surely never lighted on this orb, which she hardly seemed to touch, a more delightful vision. I saw her just above the horizon, decorating and cheering the elevated sphere she had just begun to move in, glittering like the morning star full of life and splendor and joy.

Oh, what a revolution! and what a heart must I have, to contemplate without emotion that elevation and that fall! Little did I dream, when she added titles of veneration to those of enthusiastic, distant, respectful love, that she should ever be obliged to carry the sharp antidote against disgrace concealed in that bosom; little did I dream that I should have lived to see such disasters fallen upon her, in a nation of gallant men, in a nation of men of honor, and of cavaliers! I thought ten thousand swords must have leaped from their scabbards, to avenge even a look that threatened her with insult.

But the age of chivalry is gone; that of sophisters, economists, and calculators has succeeded, and the glory of Europe is extinguished forever. Never, never more, shall we behold that generous loyalty to rank and sex, that proud submission, that dignified obedience, that subordination of the heart, which kept alive, even in servitude itself, the spirit of an exalted freedom! The unbought grace of life, the cheap defense of nations, the nurse of manly sentiment and heroic enterprise is gone. It is gone, that sensibility of principle, that chastity of honor, which felt a stain like a wound, which inspired courage whilst it mitigated ferocity, which ennobled whatever it touched, and under which vice itself lost half its evil, by losing all its grossness.”

One of the first memories I have of the year I lived in France as an exchange student, the daughter of my host family took me to tour the nearby town. In the church of that town, all of the statues—those standing in alcoves, and those lying on top of tombs of nobility—had been beheaded. Because most of the royalty and nobility of France were executed during La Révolution, and those statues represented nobility, the statues were also executed.

It is a little eerie to walk into a church where the statues are headless.