Vanity - Hillary Clinton, the worst person, man or woman in the world.

When Donald J. Trump rode down that elevator in Trump Tower with his wife at his side to announce that he was running for POTUS, I told my wife he will get the nomination and will soundly beat Hillary Clinton, which is exactly what he did, He actually won more states then he did because of the heavy illegal voting of Democrats. That truth is surfacing right now.

Fact is, Hillary Clinton was the worst POTUS candidate the Democrats ever nominated. Bottom line, Clinton is an Empty Suit from top of her head to the tip of her toes. Her current tome will be sitting on the Bargain Book Bin within a week or two.

Game over, folks. Ms. Clinton will never be chosen the Grandmother of the Year, I can assure you of that. Too in love with herself!!! God has zapped this misfit woman for all eternity...Thank You, God, Almighty!!!

My Grandma said that I should always try to say something nice about a person.

Let’s look at what she’s done.

She makes a good perch for buzzards?

For an interesting review of “What Happened”, mostly consisting of quotes from the book, read this: https://twitter.com/katereadsbks/status/907630099519881219

It’s a review by a staunch Leftist who finds Hillary’s diatribe stupid & revolting. If her own core voter base can’t stand her drivel, it’s pretty clear we dodged a bullet.

Highlight is where she disparages those taking antidepressants, opting instead to consume [presumably copious amounts of] chardonnay.

In “What Happened”, Hillary notes that she kept getting asked “why are you running for office?” without ever answering the question beyond some form of sexism.

I hope to high heaven Trump is planning on doing something about that, pronto. He cannot afford to wait until after the next election because the Rats are going to repeat their crooked electioneering, only worse.

Now to your main point, yes Hillary is the worst person on earth, not just the worst candidate in the election. She's worse than bin Laden because had she been "elected" she would have brought the entire country to its knees, something bin Laden didn't even get close to doing. Ditto Hitler. She's worse than Hitler. Ditto Stalin. She is Satan himself. And I'm not one to engage in hyperbole. ;-)

I can assure you that Hillary Clinton never came close to winning the popular vote. Her victory came from massive illegal voting of all sorts, which Democrats have been using for many years.

I fail to understand why both Clintons are not in Leavenworth?????

North Korea’s dictater-tot, the Juche-fruit, is pleased to find someone who thinks he’s not the worst person in the world.

Hillary Clinton is neither man or woman, nor human being........she is the monster “Devil”, better known to us humans as “Satan”!!! End of story!!!

12 posted on 09/13/2017 11:44:04 AM PDT by JLAGRAYFOX (Defeat both the Republican (e) & Democrat (e) political parties....Forever!!!)
[ Post Reply | Private Reply | To 11 | View Replies]
To: JLAGRAYFOX
People don't remember that this nasty psychotic hate-witch began her career of lying and corruption by presenting forged documents to a federal judge in the Nixon Watergate hearings. 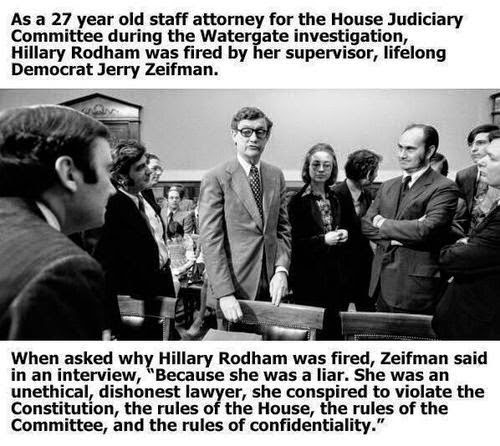 The worst women is either Hillary or barrack.
The worst man ..soros.

No. She is a skin bag cesspool filled with puss, maggots and evil. Mostly evil.