The Wrap revealed on Friday that Uygur and Koller, who are best known for their roles on The Young Turks network, authored a number of sexist blog posts.

In the posts, Uygur argued that women were genetically “flawed” for not wanting to have more sex and claimed that he was “done” dating any woman if he hadn’t felt their breasts by the third date. Koller meanwhile recounted an experience of talking to three teenage girls whom he described as “whores in training” and “literally looking for boys to pick them up.” “They were around 14-16 and in a few more years will be pretty damn good looking,” he wrote. In a statement on Saturday, Justice Democrats announced that they were “deeply disturbed” by the “horrifying” posts and demanded both their resignations.

“The words and conduct in Mr. Uygur and Mr. Koller’s posts degrade what it means to be a Justice Democrat,” wrote Justice Democrats’ executive director Saikat Chakrabarti. “We do not feel that Mr. Uygur is fit to lead or participate in an organization that truly believes women’s issues and the issues of black and brown people are all of our issues.”

In a statement on Friday, Uygur apologized for the posts and blamed them on him being a conservative at the time.
“The stuff I wrote back then was really insensitive and ignorant,” Uygur said. “If you read that today, what I wrote 18 years ago, and you’re offended by it, you’re 100 percent right. And anyone who is subjected to that material, I apologize to. And I deeply regret having written that stuff when I was a different guy.”

“If someone said that today, I would heavily criticize them on the show and rightfully so, and I have. I’ve criticized myself over the years,” he continued. “I had not yet matured and I was still a conservative who thought that stuff was politically incorrect and edgy. When you read it now, it looks really, honestly, ugly. And it’s very uncomfortable to read.”

Caught in their own trap.

Has Weinstein considered trying the “I was a conservative at the time” defense? 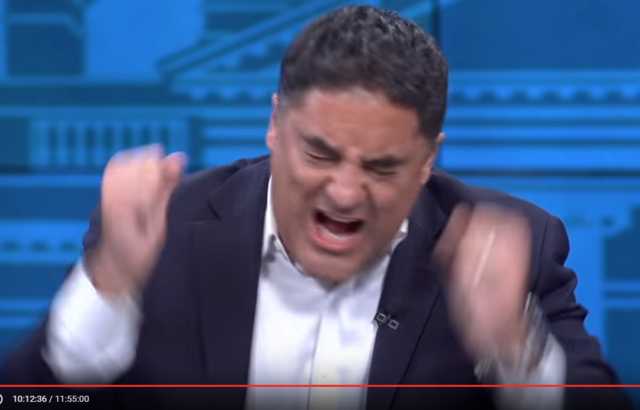 Skank Wigger: as if anyone cares. Or even knows who you are.

He’s the same jerk he was 20 years ago. A leopard doesn’t change his spots.

I guess I’m supposed to know or care who this clown is, but he means nothing to me.

Haha, that was one of my favorite meltdown videos, they were all on suicide alert.

What he wrote, was in his heart as a human being.

Nothing Cenk said can be blamed on a political ideology.

It speaks to the soul of the man who said it.

You own it Cenk.

I’ve been watching this go on.

Despite my extreme distaste for the Big Brown Buffalo, Justice Democrats are no better.

...and the virtue signaling continues across the land.

His nephew is much worse.

> I guess I’m supposed to know or care who this clown is, but he means nothing to me. <

Here’s all you need to know. Cenk Uygur was one of the many cable TV liberals who confidently predicted that Hillary was a shoe-in for president. No way could Trump win. No way in hell. Then Trump won. Epic meltdown on Cenk Uygur’s part. He goes from smugly confident to unhinged. It’s a classic!

The video is here:
https://www.youtube.com/watch?v=jpyKuzoFW40

The question is, why would any woman go out with him in the first place. Oh, and no, he wasn't a conservative at the time. Thanks Jet Jaguar.

aka The Cenk Emperor...

Cenk Uygur is a jerk.

19 posted on 12/25/2017 8:24:17 PM PST by Architect of Avalon
[ Post Reply | Private Reply | To 1 | View Replies]
To: Leaning Right
I've watched that so many times over the last year. My favorite part is when he's reporting how the NYT predictions keep changing, "By the way, 54% chance Donald Trump will win. It moved as we were talking. It just moved again. 55% chance Donald Trump will win--"

And that Beta male White guy on the right, whose name I don't know, bursts out, "Stop saying the number!!"

I laugh every time.