LATER THIS YEAR, Amazon will begin accepting grocery orders from customers using the Supplemental Nutrition Assistance Program, the federal anti-poverty program formerly known as food stamps. As the nation’s largest e-commerce grocer, Amazon stands to profit more than any other retailer when the $70 billion program goes online after an initial eight-state pilot.

But this new revenue will effectively function as a double subsidy for the company: In Arizona, new data suggests that one in three of the company’s own employees depend on SNAP to put food on the table. In Pennsylvania and Ohio, the figure appears to be around one in 10. Overall, of five states that responded to a public records request for a list of their top employers of SNAP recipients, Amazon cracked the top 20 in four.

Bezos like Soros, has learned how to game the system. Time to fix it.

No wonder bezos kisses up up to all the democrats. (because they leave him alone and let him exploit his employees.) 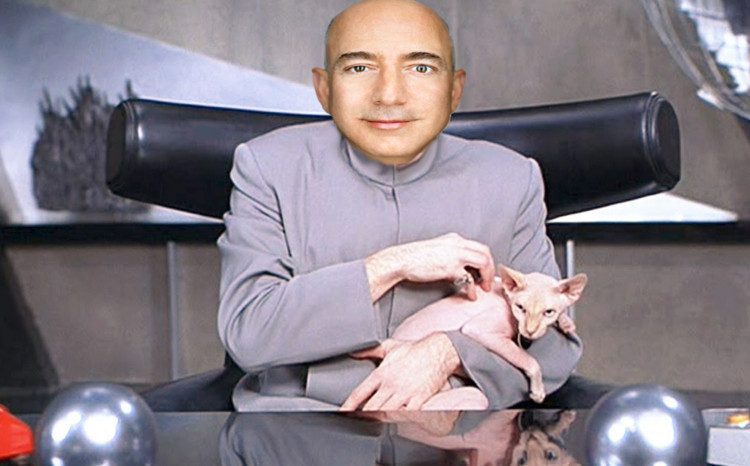 OH BOY! Who has Amazon pissed off! This was reporting strictly reserved for Walmart, et. al. Just the evil Walmart, driving mom & pop stores out of business, and then paying the employees substandard wages...

Am I the only person left who doesn’t look at a “job” as an “entitlement”?

I’m 72 (retired now) and of the jobs I’ve held over the years, it always worked like this:

I never worried if the CEO, or the company made more money than me...if they didn’t, they couldn’t afford to give me, and others, jobs.

It’s basic...company needs help, company sets the pay based on what it’s worth to them to get the job done; I take the job, and go to work everyday.

If I find work I like better, or that pays more, I am willing and able to quit, and take the new job.

Companies, corporations, and CEO’s will ALWAYS make way more than individual employees. Whining about it will not get you a raise, and could get you Unemployed.

Want to make their salaries...then get the training, the experience, the success, and the attitude to be a CEO, and go for it...otherwise, STFU.

Amazon's tax load has little to do with the wage they pay warehouse loading dock flunkies.

More specifically, given that the Founding States gave the “power of the purse” (1.7.1) uniquely the the House of Representatives, the real problem is the corrupt, post-17th Amendment ratification Senate that lets the likewise corrupt House get away with unconstitutional taxing and spending, vote-winning food stamps not listed among Congress’s constitutional Article I, Section 8-limited powers.

Patriots need to finish the job that they started when they elected Trump president.

More specifically, patriots now need to be making sure that there are plenty of Trump-supporting patriot candidates on the 2018 primary ballots, candidates who will support Trump in leading the states to repeal the 16th and ill-conceived 17th Amendments.

Patriots must then pink-slip career lawmakers by sending patriot candidate lawmakers to DC on election day.

And until the states wake up and repeal 17A, as evidenced by concerns about the integrity of the outcome of Alabama's and Pennsylvania's special elections, patriot candidates need to win elections by a large enough margin to compensate for possible deep state ballot box fraud, associated MSM scare tactics, and interference from people like Soros.

Those employees are free to find another job, aren’t they?