Our View: Suddenly, I-95's future is looking a lot brighter
The Fayetteville Observer ^ | June 10, 2018 | Editorial Board

Ever since the notion of widening Interstate 95 and making it a toll road was chased out of town by an angry mob, there was a bewildering silence out there. What to do about “America’s Main Street”? How to fix the nation’s first major interstate highway, parts of which bear a worrisome resemblance to what old-times saw on Day 1?

In fact, some of those ancient parts are right in our backyard, including the too-low overpasses in Harnett County that trap an over-height truck from time to time. Harnett also owns a few of those short exit ramps that make you feel as if you’re landing a supersonic jet on an aircraft carrier when you get off the road. Were we going to be stuck with these artifacts forever?

Until last summer, we feared that was the case. But then, after several years of official silence from the state Department of Transportation, came heartening news just about one year ago: The state will spend about half a billion dollars on improvements to I-95 in two segments — from Lumberton to Fayetteville and from Dunn up to the Interstate 40 interchange in Johnston County. All of that road will be widened to eight lanes. And there’s not a single toll booth in the plan. The whole thing will be paid for out of regular transportation funding.

A year later, we get even more good news: The state has won a $147 million federal infrastructure grant that will extend the eight-lane widening project down to the U.S. 301/Business 95 exit in Eastover, which is one of the most-used gateways into Fayetteville. Once again, tolls won’t be part of the project.

For beachgoers, there was more good news in the federal grant announcement, which came last Tuesday from the offices of U.S. Sens. Richard Burr and Thom Tillis. The grant will also fund the completion of work to turn all of U.S. 70, from I-40 through the Havelock bypass, into a limited-access highway, upgrading it all to interstate highway standards. The road will then become Interstate 42.

The federal grant also includes money for installing a fiber optic trunk line along the 181-mile length of I-95 in North Carolina, between the South Carolina and Virginia state lines. It will also fund microcell towers and message signs with real-time information on driving conditions and the technology needed for autonomous vehicles.

It’s unclear when the work paid for by the federal funding will begin, but the state projects announced last year are slated to start in 2026. It’s a little soon, in other words, to start planning a summer vacation trip around the improvements, or to worry about construction detours.

Still, all of these announcements bode well for continued improvements in this state’s highway infrastructure. And they will enhance Fayetteville’s ability to serve as a commercial warehousing and shipping hub — one kind of economic development that’s already showing up in this community. Late last year, DHL Supply Chain and the Campbell Soup Co. announced the creation of a 140-job logistics and distribution center in Cedar Creek, near I-95. A substantially upgraded highway will, in the future, enhance this area’s chances of landing more such operations.

For too many years, it appeared that the deteriorating conditions and chronic congestion of I-95 would keep such economic development opportunities passing us by. But now it’s hard to be anything but optimistic about what the highway can bring to our future. That’s a lovely turnabout. 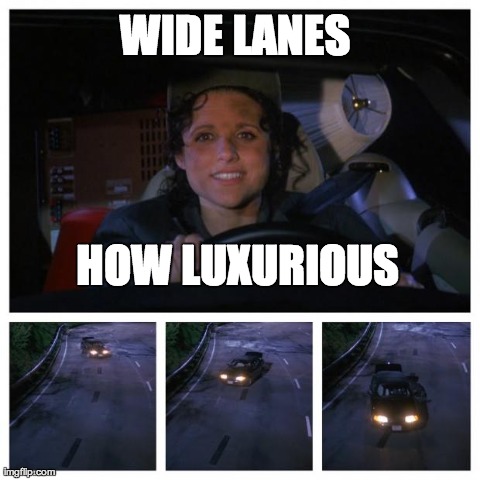 Glitch, thanks for reporting

I-95, a parking lot the pretends to be a highway.

Announced last year and will START IN 2026. That’s what’s wrong with this country!

No, that would be the Long Island Depressway.

It would be LOVELY if they decided to use some alternative technologies for the road development. Some of the recycled rubber tire materials that cause less wear and tear and are more durable and flexible. Some of the other shifting development technologies that the Obama administration outlawed not via laws but regulation.

One thing it seems we certainly do love in NC, a highway "improvement" project that can span decades.

Somebody's cousin is gettin paid. Just like the anti-jetty pro-dredge bunch at the coast! d;^)