When actor Luke Perry, best known for portraying TV heartthrob Dylan McKay on the ’90s teen drama “Beverly Hills, 90210,” died Monday after suffering a massive stroke, there were the usual public displays of sadness when a public figure leaves us. But his passing was especially painful for people of a certain age.

As one fan expressed on Twitter: “I’m in mourning for Generation X today, for real.”

Perry died at just 52 years old. Which makes him the first Gen X icon to succumb to natural causes. That’s an unsettling reality check to those of us who identify as Gen Xers, the 65 million people born between 1965 and 1980. We’re used to death — we’ve lost plenty of heroes to drugs and suicide, everyone from Kurt Cobain to River Phoenix to Chris Cornell. But Perry is the first to die of something we only expect to happen to old people.

It doesn’t help that Perry’s death came on the heels of a pretty egregious generational slight. A CBS News story in January, which focused on millennials, included an infographic of every generation, from the silent generation (those born between 1925 and ’45) to baby boomers (born between ’46 and ’64) to the post-millennials (born between 1997 and the present). Generation X was conspicuously absent.

“Gen X is definitely having a midlife crisis,” says Matthew Hennessey, 45, author of “Zero Hour for Gen X: How the Last Adult Generation Can Save America from Millennials.”

“It’s not just about growing older. We have this creeping dread that we’re going to be displaced and forgotten.”

Indeed. He is mostly known for a TV show that I never watched. I was aware of 90210, but didn’t watch it (it seemed to a show that mostly girls watched).

““It’s not just about growing older. We have this creeping dread that we’re going to be displaced and forgotten.””

RE: Notable Baby Boomer deaths by natural causes - Brian Piccolo comes close, but born too early. When I was very young, I remember the boys talking about “Brian’s Song” in school.

Generation X was already at the age where people naturally start to think about their own mortality. I doubt Luke Perry’s death caused anyone to panic. 52 is pretty young to die these days, but it’s still far from young. 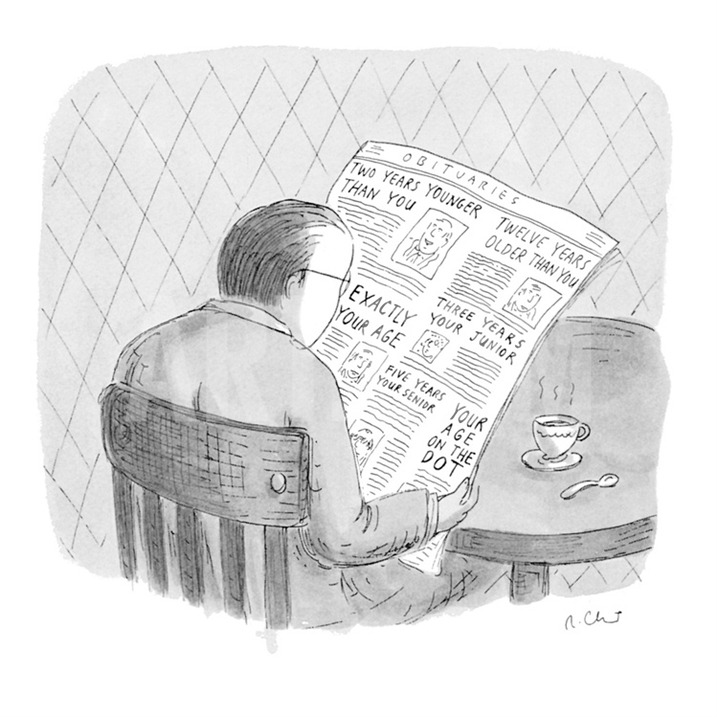 Ages 50 to 60 are the dangerous age for males. Heart attacks and strokes. You get through that you’re in pretty good shape. Although you can still get run over by a bus or get cancer, or kidney failure, or any other damn thing that human beings get.

Sooner or later every person of every generation has to come to face the realization that they are not immortal. There are all kinds of ways that epiphany happens.

In spite of what this story says, it isn’t a celebrity’s death. Pretty much everybody has people they know who died young. And it matters a great deal more when it’s someone you know and even more if it’s someone you care about.

In 2003 my dad died, in 2004 my mother died, in 2005 three friends of the same age died. 2 by illness and one by accident. That pretty much brings it home. My wife said to me we need to do the things that we want to do now. So we packed everything up and left Florida and went to where we were much happier. As I said to my wife whenever I die it won’t be in Florida thank God.

You have any citations on the coke and booze? Because so far as I can see, Luke Perry was a straightforward, blue-collar work-a-day actor. The dude was working an asphalt job when he got hired for '90210'.

Matthew Perry was a coke and booze head for a while (hopefully past it). Luke Perry was, by all appearances, not. Don't speak ill of the dead who can't defend themselves, celebrity or not.

He had a couple of years on me. I was shocked to see pictures of him. He looked wizened. I look nothing like that. I haven’t colored my hair since I turned 42 (and I quite like the grey), I haven’t done any Botox or fillers yet, and I could easily pass for his daughter. I knew that cocaine and alcohol can take a heavy toll, but I guess it hadn’t registered for me.

Everyone is mortal. Stay tuned for more News of the Obvious.

Been watching the “Leaving Neverland” series on HBO - young adults finally coming forward and admitting they were abused by Michael Jackson when they were kids - his generation of fans had a very difficult time accepting his death, and even today most defend him even though the depth of his evil is exposed with the hair-raising stories of what was actually going on at Neverland and how Jackson manipulated the kids and their families into going along.....

This is such a melodramatic article. I doubt that anybody but the author (with an obvious lack of new material) attributed Perry’s death to a “midlife crisis” among Gen X.

Just because we're not liberals like the Boomers or needy like the Millenials doesn't mean we should get smeared.

We're the people who innovate, the last generation who played in the woods, rode bikes for miles without helmets, and played outdoor games rather than staring at our phones all day.

Just today I heard that my SIL’s sister, her husband suddenly died at age 54 of heart failure. I never seen him or know anything more but was told he was a bit husky. None of us are guaranteed a long life.