Heart-stopping moment mama bear lunges at a tourist who gets too close while 'trying to pet [tr]
UK Daily Mail ^ | July 15, 2019 | Maxine Shen

A man was caught on camera getting dangerously close to a mama bear and her cubs while apparently attempting to pet them at a Tennessee national park.

Paige Marple was at Cades Cove in Tennessee's Great Smoky Mountains National Park on July 13 at about 3pm when she captured the moment when a man got far too close to a black bear and nearly got attacked as a result.

In the video, which Marple shared on Facebook, a man wearing a grey shirt can be seen holding out his hand while walking towards a trio of cubs that are following their mother as they cross the grass to cross the road.

He’s seen too many hanna barbera cartoons. Animals are not people. Next, someone who loves the “Cars” movies will try to pet a race car at Daytona as is speeds by at 200 MPH, and he’ll lose his arm.

The guy’s an idiot! What part of the term “mama bear” does he not understand, real bears or humans?

Me too. I live close to there and stupid tourists are all over the place. So are bears. Don’t play with the bears.

The guy’s a moron.

One of the house / cabins there has a nice buck that comes out to greet you. This thing had a pretty massive rack and was walking up to me. I did not want to directly interact with it but it was walking up to me as if it wanted a back rub. It was pretty cool to see the nice felt-covered rack like that but still a bit too close with a living breathing Buck LOL

He’s lucky he still has balls. That bear was heading right for them.

I saw something similar happen at Yellowstone 20 years ago. That person was just trying to get a better picture. Smdh

Then people wonder why bears attack.This dummy was lucky that momma bear was in a good mood.If she wanted too that guy would have been mauled badly.

Yes. The bison at Yellowstone are NOT domesticated. We saw people getting way too close to the bison, all for the sake of a selfie with the bison close by in the background. Morons.

“...The guy’s a moron....”
Yep....and probably votes...for RATs...LOL
He’s got gray hair....I’m surprised he’s actually lived long to grow it being as moronic as he is. Too bad it wasn’t a mama grizzly. She’d have cleaned the gene pool a little. 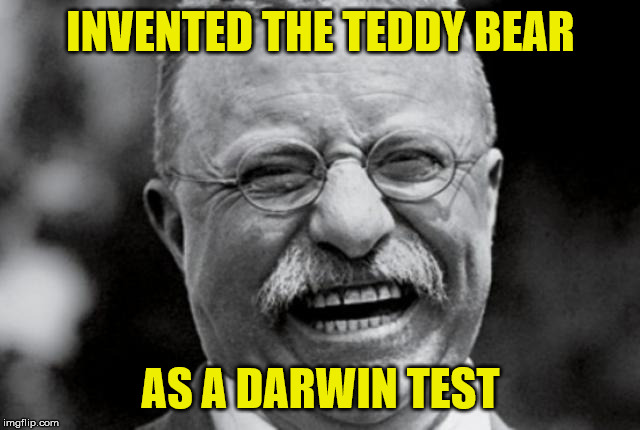 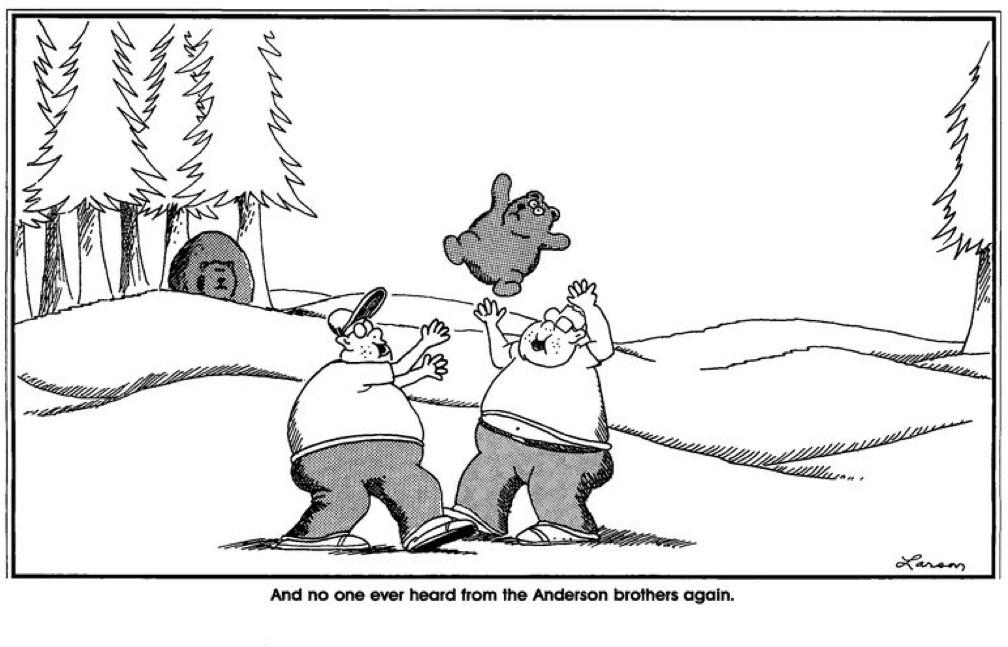 The moose at Yellowstone aren’t domesticated, either. They walk wherever they want to go. Saw one find a nice shady spot next to one of the cafes...area was quickly cordoned off by park rangers to prevent humans from getting too close.

Sometimes there are simply NO words when you reach a certain level of stupidity....

Are “tourists” as stupid at home as they are when touristing?

That is one of my favorite far side cartoons.

These idiots have a new ‘religion’. It’s called Nature.

I am sick to death of all the smarmy, emotion-laden material in the media.

‘Nature’ has been elevated to the level of religion and in fact to displace religion.

People are bringing up their kids with the idea that the real ultimate and final yardstick for all moral and ethical reasoning is ‘nature’ and nothing else.

There’s a pathology going on here. That kind and level of religious ‘piety’ doesn’t belong to the EPA or the Sierra Club or any other man-made agency and to the exclusion of all proper belief systems.

A lot of the deer in the area are pretty tame because they see so many people. The bears are never tame. LOL They will ignore you as long as they don’t have cubs but there is nothing meaner than a momma bear. The bad thing with a big buck is that they can appear tame but if it’s during rut they can kill you. I had one approach me here on the farm once. I didn’t turn my back on him and after he sniffed me all over he turned around and strolled back into the trees. Scary stuff! I got lucky that day.