…….When the national debate over illegal immigration and border security was heating up back in 2005 and 2006 in response to amnesty proposals in Congress, I was roundly criticized for suggesting the opposition to amnesty was rooted in opposition to secure borders. I was attacked by some prominent leaders of the Republican Party for saying that the U.S. Chamber of Commerce saw illegal aliens as cheap labor and the Democrat Party saw them as future Democratic voters. I take no pleasure in observing in 2019 that Democratic leaders in Congress are aggressively advocating open borders as a path to a permanent Democratic majority. And there is an even bigger picture that elitist leftists are trying to paint for us all. They want no borders, no allegiance to a nation state, no citizenship classification connected to a single country. They want a kumbaya world of global citizens that can be governed by people who “know better.” Think I am wrong?

Try to find a recent college or high school grad who can tell you what it means to be an American other than by saying it means abiding in a place called America. The members of what I call the Cult of Multiculturalism infect our schools, our media, and pop culture. The philosophy permeates the West -- its repercussions and can be seen playing out all over Europe.

The democRATs have already announced that they have given up on white, working class voters. They are importing their new constituents.

The Bushes were eager to court their new “more agreeable” voters.

The most EVIL song ever written—for all the “open borders” creeps:

There is not sufficient support among Americans to put the fascists in power so they are relying on grateful illegals to vote and turn the tide. Advocating open borders is treason.

5 posted on 07/27/2019 6:40:33 AM PDT by Spok
[ Post Reply | Private Reply | To 1 | View Replies]
To: wastoute
The Bush family is pure evil and traitors to seeking to surrender America to the Meeheecans - perhaps for MONEY from the cartels?

GHWB & BJ Clinton connected early on and gives credence to those Mena cocaine deliveries and why BJ & GWB are "brothers". 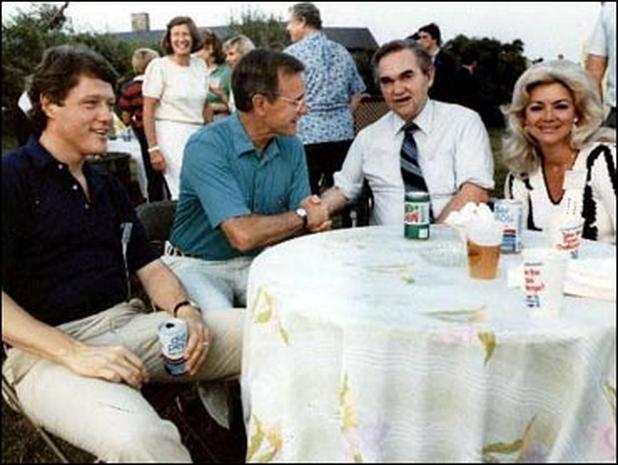 The big battle will be apportionment. President Trump will start the apportionment process using U.S. Citizens as the basis for apportionment. The libs will want to include all individuals, including illegals in the count. The law is not specific. The only question is: “How fast will it take to get to the Supreme Court?”

Just call it restoring the 2000 Census. They asked that question of at least 1/6 of the public.

Never forget that there are progressives wearing R jerseys that share then open borders agenda with Democrats.

Flimsey Grahamnesty is STILL working on the amnesty he has been trying to pass since 2006.

If these invaders leaned republican, Pelosi would be at the border with pitchforks to keep them out.

Mr. Lennon knows NOW that there’s a Hell. And he can probably surmise that somewhere far away from where he is eternally incarcerated, there’s also a Heaven.

John 3:18 “He that believeth shall not be condemned, but he that believest not is condemned already, because he hath not believed on the name of the only begotten Son of God.”. Only a fool would sing “IMAGINE”.

Thus far not hearing these allowed to vote results from that highly touted Trump crackdown on illegals Because if the results show they were allowed to vote that could be presented to the USSC to get the citizenship question included.

During the Trump roundup this should be done.Check the precinct list of registered voters where these people resided. If they’re on that list, Federal crime, charge them and those that enabled them to vote knowing they were illegals. If ebough noise is made it should discourage illegals still here from voting. Besides determining how they got a drivers license show how much it’s costing taxpayers of that state. Also point out increased premiums on drivers insurance rates.

The Clinton Motor Voter Law lets them check a box on the form saying they are a citizen, with no proof, and they are registered to vote when they get a driver’s license.

The republic is fast slipping away.

And I’m constantly told an Article V Convention of the States is too dangerous to consider.

A few GOP senators put Motor Voter over the top.

16 posted on 07/27/2019 12:32:11 PM PDT by Jacquerie (ArticleVBlog.com)
[ Post Reply | Private Reply | To 14 | View Replies]
To: FtrPilot
President Trump will start the apportionment process using U.S. Citizens as the basis for apportionment. The libs will want to include all individuals, including illegals in the count. The law is not specific.

The law may not be specific, but there are emanations from penumbras in the Constitution.

The 14th amendment to the Constitution requires that only citizens be counted for the purpose of political representation.

Representatives shall be apportioned among the several States according to their respective numbers, counting the whole number of persons in each State, excluding Indians not taxed. But when the right to vote at any election... is denied to any of the inhabitants of such State, being twenty-one years of age, and citizens of the United States, or in any way abridged, except for participation in rebellion, or other crime, the basis of representation therein shall be reduced in the proportion which the number of such citizens shall bear to the whole number of citizens twenty-one years of age in such State.

The section lays out the penalty to the states for infringing on their citizens' right to vote by proportionally reducing their representation by the percentage of infringed voters to the total eligible voters. You can't assess that without counting voters, that is, citizens.

The rebuttal to this would be several:

The Constitution requires the counting of citizens. By Article VI, this is supreme Law of the Land. Congress, nor the Supreme Court, may overturn Article VI or the 14th amendment requirements.

Every week, as we Orthodox Christians prepare to receive Holy Communion, we pray a series of preyers in preparation for receiving the Holy Mystery. One of them is this:

As it states in the prayer:

....For Thou dost not wish, O Master, that the work of Thy hands should perish, neither dost Thou take pleasure in the destruction of men, but Thou desirest that all men should be saved and come to the knowledge of the truth.....

This is entirely Scriptural:

Nevertheless, singing—or creating—such packs of lies as “Imagine” does not further one’s salvation!