(CNN) — Archeologists in Peru have uncovered the remains of around 250 children sacrificed by the pre-Columbian Chimú civilization. The remains are of children aged 4-12 years old, as well as 40 warriors, sacrificed between the 13th and 15th centuries, according to a video from Peruvian state media agency Andina. The Chimú civilization inhabited northern Peru before they were conquered by the Inca. They built Chan Chan, the largest city in pre-Columbian South America. 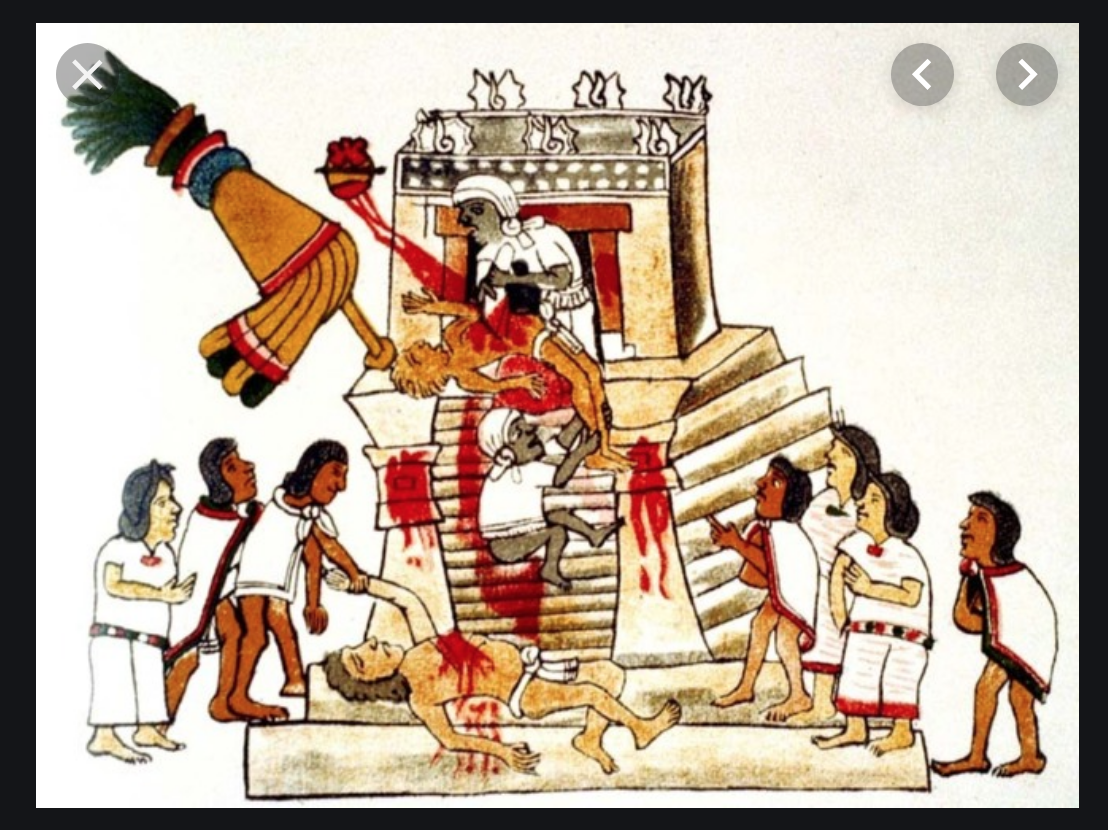 The leftward, diagonally-leftward leaning banana thing with the poofy indian headdress on top, some God thing.

You can tell I'm an expert, right?

The Conquistadors were heroes

I think American infanticide abortion even surpasses the Nazi Holocaust and Soviet purges.

Damn... the “pre-Columbian Chimú civilization” had baby-killing liberal democrats back then, too.

Meanwhile we kill about 4000 per day on our nation. Often with taxpayer funds.

If I think about it too much I can’t function. People ask how did Germans go about their day with the incinerators going? I know. Just the way I do.

At least we do make serous protests, and have our massive
amounts of money and effort into ending it. My city is abortion deluxe with clinics, hospitals and obs all murdering merrily but we also have three good abortion alternative places. This is some comfort. We are trying.

Exactly right. This is why history is such an important subject, and why the Left can’t allow a true rendition to be exposed.

What a shame Columbus and Christianity came to the western hemisphere to spoil the utopia that existed at that time.......

My ancestry is primarily Spanish-but like most other people of Spanish ancestry, there are Native Americans in the mix-no doubt some of them were Aztecs-who were once part of the Apache tribes before they headed South-none of those tribes were very nice people to begin with...

As far as I’m concerned, the Spaniards might have stopped human sacrifice as such, but they redefined it by bringing Spanish methods of death-by-torture-probably a worse one than a death by execution as a sacrifice. The Spaniards also brought the Inquisition they had used to “convert” anyone not a Catholic in Europe-come to Jesus our way or die by torture and/or burning at the stake-not the best way to win converts-the Spanish also enslaved every surviving Native American they got ahold of-and when too many of them decamped with haste for parts unknown to avoid capture or died in escape attempts they brought over a bunch of captive Africans to replace them-they were just as bloody and cruel as the Natives in my opinion-just more refined in their methods...

Taking conquered enemies as slaves was still common practice everywhere at that time-the Spaniards were just taking the defeated Natives as spoils of war like everyone else did, along with raping women, and stealing all the treasure they could cram into their galleons for the return trip to Spain to finance war in Europe-NOT nice people or heroes in any sense that I can see...

None of my ancestors were nice people, as far as I’m concerned-fortunately we are all a bit more civilized now...

I’ll add another observation to the Spaniard’s affinity for torture and blood-Spain was part of the Roman Empire for a couple 1000 years-the people were/are the children of Romans-if the “barbarian” Goths and Visigoths hadn’t curbed Rome, the Spanish might have brought gladiators and other real bloodsport to the Americas and built arenas for them to fight to the death in instead of just bringing bullfights...

All cultures are equal.
Before Columbus they were peaceful loving folk

I actually had a teacher around 8th grade who believed that.

Correct, our kindermord will total 52 million more or less by year’s end.

Historians say the purges famines and camps under Stalin claimed 20 million victims, the Nazi death camps another 12 million for a total of about 32 million.

Our progressives lead the way.