How much is he being paid to debase himself is the question.

I’m all for Roger Badhell having to donate 1/2 of his own salary to pay for Krap’s extortion fee. Just do it.

Plus he really wasn’t good as everyone thought initially. He benefited from a great defense, o-line and run game during his SB run.

He’ll probably rise up in the ranks of the organization once his game playing days are over.

That was what the black protests have been about. Getting more black employees in the higher offices of professional football.

They were threatening to “black out” the season and not tune in, buy merch, etc. That was when NFL decided to go ahead and accept kneeling protests of the National Anthem.

I’ve heard only 11 teams are there. Any truth to that?

It’s rumored that Kaepernick will accept a back-up deal. Probably ran through his settlement money already, and perhaps Nike has signaled that they aren’t going to keep paying him to lay around.

If there’s any ‘collusion’ here it’s the League colluding with a few activists to get Kaepernick BACK into the league. Frankly, I don’t care if he does. It will be a short media circus until Kaepernick has that first 3-interception game where he gets nailed by a DE and stays down. The Kaepernick experiment won’t last 4 games.

It means he look to the 2nd and 3rd plus receivers on a pass, or is his eyes locked to primary receiver

Kaepernick killed himself, I know that.

Won’t they now have to provide the same opportunity to any displaced player, who desires his own workout/combine?
Must be some form of discrimination, if they deny such a deal.

This is a totally football technique issue.

You may recall that when K. came into the league he was very successful. He was an unusually good runner, and a decent enough passer. If he didn’t see his target... he took off, and he was hard to catch.

After a while, coaches noticed that he had a big drawback. A good quarterback sees the field, and sees not only his primary target, but looks around to see his secondary and even his third and fourth possible targets if the main one called in the play is not open. The book on K. was that he would just lock onto the primary target with his eyes, and not take advantage of other opportunities on the field. That made him a lot easier to defend against once it was noticed.

Just running around and throwing balls at targets in a workout doesn’t replicate the game stress of seeing the field. That’s what I was talking about.

Probably about the hottest part of the day-—and sunset should be around 4:45 PM.

will ones who simply want a back-up quarterback for a very cheap price.””””

CK is so very TOXIC that I don’t call that a ‘cheap price’.

I would never own a horse that I cannot trust in the pasture with any of the other horses. The potential damage isn’t worth it.

Kapperdick was pretty bad when he last played for SF, losing many games in a row. Garrapolo took over with the same crew and won 5 straight.

Maybe in this case the NFL DOES get it. The guy is out of shape, hasn’t played in 3 years in a game that is VERY fast and without being in it, you just can’t keep your timing.

Give him his workout, show that he can’t play. Case closed. 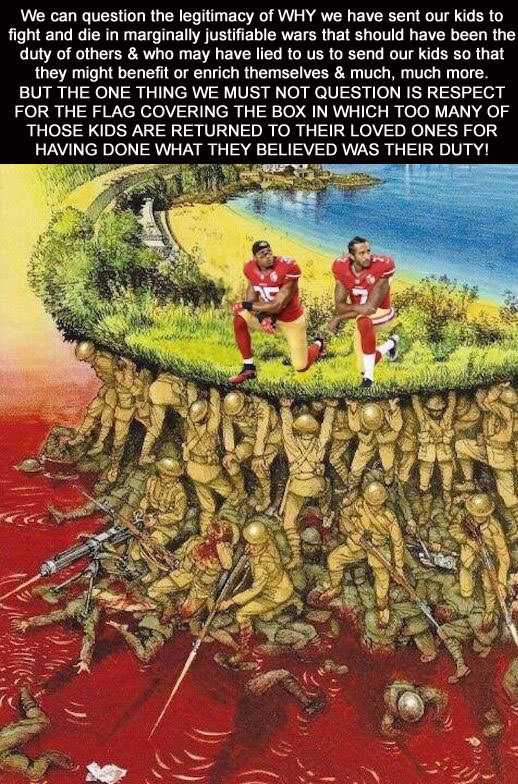