In the final years of the Obama administration, Joe Biden’s net worth was estimated at -$947,987. The minus sign was the most important part of that figure. The negative numbers weren’t implausible. After Obama won, Biden disclosed that he was carrying as much as a staggering $465,000 in debt.

But despite being a million in the hole, after his administration was done, he moved into a 12,000 foot estate that looks like a poor man’s replica of the White House with 5 bedrooms, 9 bathrooms, a wet bar, 2 kitchens, a sauna, 8 fireplaces, parking for 20 cars and a master bedroom on an entire floor.

That’s in addition to buying a $2.7 million vacation home in Delaware and his original lakeside home.

Where did all that money come from? As with Bernie Sanders and Hillary Clinton, part of the answer lies with some very lucrative book deals. The same year that Biden moved into his miniature White House, Macmillan offered Biden and his wife a multi-book contract worth unknown millions. That was quite a lot of money for a retired veep who hadn’t even announced that he was running for again.

Biden’s previous literary adventures hadn’t exactly set the publishing world on fire. On taking office, Random House had paid him a $9,563 advance to record an audio version of Promises to Keep. The campaign book sold some 49,000 copies and netted under $200 in royalties in 2009.

No, there are no missing zeroes there.

(Though doing far better than Cory Booker's disastrous book, down in the

The book deals are a money laundering scheme to pay off dims.

reminder of the way the ‘elites’ accrue/launder money..

Just wondering if the publishers were a $ laundering conduit for him and others. It seems plausible.

An honest man can become rich in business.

But no honest man becomes rich in government.

6 posted on 12/28/2019 1:18:18 PM PST by Rurudyne (Standup Philosopher)
[ Post Reply | Private Reply | To 1 | View Replies]
To: bitt
One needed reform is to prohibit advances for books written by political figures. By all means, write a book. Market it aggressively. Enjoy royalties on sales. But no advances.

The House adopted such a rule after the dems whipped up a bogus frenzy over Newt Gingrich's book. The Senate did not follow suit, and Hillary pocketed her $6 million payoff a millisecond after leaving office. Business as usual. One rule for Republicans. No rules for dems.

Just ban advances. If Republicans had the wit of a cabbage, they'd run with the issue.

They get book deals and other favors from rich leftists. Which they have to repay if they get into office. And that’s how democracy dies.

Joe Biden sold his soul to the banks in Delaware long ago.

There is nothing new about Biden Corruption. 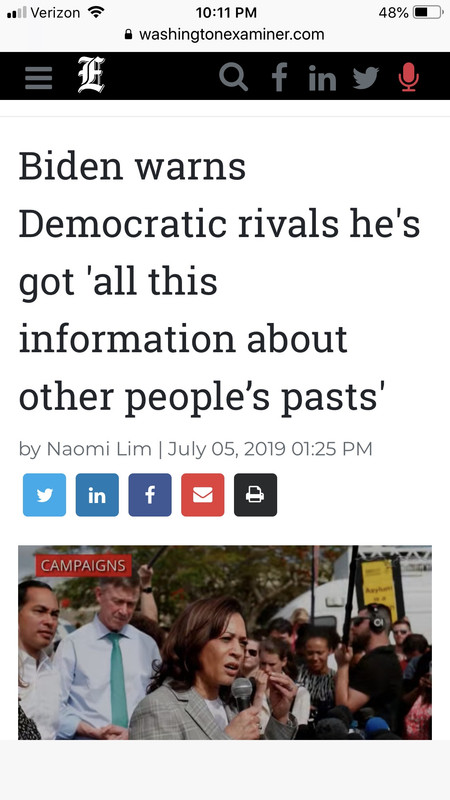 The man is fake as cheap, dirty Politicians come.

Biden has got a lot of use out of his claims of poverty, he never misses a chance to throw out how poor he is to boost his credentials among his democrat base. Amazingly though many of his relatives seem to become filthy rich just by their proximity to him, it’s funny how that works. Similarly amusing is how Elijah Cummings pled poverty while his wife seemed to have the ability to make money out of thin air.

It’s long been a tactic of politicians to keep the money out of their account while their close relatives seem to enjoy the gift of Midas. Take the Kennedys, I doubt Ted ever officially earned a dime more than his senate salary yet he lived a life of opulence through family trusts that never seemed to diminish even though the last Kennedy to ever earn a dollar outside of politics was probably his father Joe, and most of that was stolen.

It seems that the best place to be is the child, sibling, or spouse of an impoverished politician.

Book “deals” for the left is nothing more than money laundering and payoffs.

I still think the long knives will come out for the former Veep and he’ll be eaten alive by the democrat harpies and sea hags. It will be some dried up old nasty like Warren or Clinton that ends up with the rat nomination

14 posted on 12/28/2019 2:05:14 PM PST by Grampa Dave (Lincoln: "The Founders did not make America racist or slaver. They inherited it, that way!")
[ Post Reply | Private Reply | To 6 | View Replies]
To: All
One of the all-time bodacious federal scams was Obama’s “stimulus program.” All the Democrats got filthy rich.
Obama appointed Biden to “oversee “stimulus money distribution.” To date, still no full accounting as to
where it all went (not to worry, Hunter knows where it is).

Remember when President Obama bragged about Joe Biden’s fiscal discipline creds in 2009? “To you, he’s Mr. Vice President, but around the White House, we call him the Sheriff,” Obama warned government employees. “Because if you’re misusing taxpayer money, you’ll have to answer to him.” Fast-forward to 2012. Call in the search teams. Since being appointed the nation’s stimulus spending cop, Sheriff Joe has taken a permanent donut break.

He’s AWOL on oversight. In fact, he’s been bubble-wrapped, boxed and kept completely out of sight. The garrulous gaffe machine hasn’t sat down for a national media interview in five months.

The Democrats’ trillion-dollar “American Recovery and Reinvestment Act,” however, keeps piling up waste, failure, fraud and debt. Who benefited most? Big government cronies. According to Investor’s Business Daily, a new analysis by Ohio State economics professor Bill Dupor reported that “(m)ore than three-quarters of the jobs created or saved by Pres Obama’s economic stimulus in the first year were in government.”

Dupor and another colleague had earlier concluded that the porkulus was a predictable jobs-killer that crowded out non-government jobs with make-work public jobs and programs. Indeed, the massive wealth redistribution scheme “destroyed/forestalled roughly one million private sector jobs” by siphoning tax dollars “to offset state revenue shortfalls and Medicaid increases rather than boost private sector employment.”

Will this Keynesian wreckage come up during Biden's debates? It should be a centerpiece of domestic policy discussion. Nowhere is the gulf between Obama/Biden rhetoric and reality on jobs wider. Remember: Obama’s Ivy League eggheads behind the stimulus promised that “(m)ore than 90 percent of the jobs created are likely to be in the private sector.” These are the same feckless economic advisers who infamously vowed that the stimulus would keep unemployment below 8 percent — and that unemployment would drop below 6 percent sometime this year. Sheriff Joe rebuked the “naysayers” who decried the behemoth stimulus program’s waste, fraud and abuse. “You know what? They were wrong,” he crowed.

Sheriff Biden was radio silent about the nearly 4,000 stimulus recipients who received $24 billion in Recovery Act funds — while owing more than $750 million in unpaid corporate, payroll and other taxes. (Cash for Tax Cheats, anyone?)

He had nothing to say about:
<><> $6B in Homeowners' stimulus energy credits showered on nearly 1/3 of credit-claimers who had no record of homeownership, including minors and prisoners.
<><> $530 million dumped into profligate Detroit public schools for laptops and other electronics that had little, if any, measurable academic benefits.
<><> the whopping $6.7 million cost per job under the $50 billion stimulus-funded green energy loan program
<><> politically connected Green companies are now bankrupt---they took the money then went belly-up
<><> remember? Solyndra ($535M), Abound Solar ($400M), Beacon Power ($43M), A123 ($250M) and Ener1 ($119M).
<><> $1 million stimulus went to Big Bird and Sesame Street “to promote healthy eating,” for a theoretical 1.47 jobs ($726,000 per job created.)
<><> hundreds of stimulus millions to govt GSA junkets in Las Vegas and Hawaii,
<><> hundreds of millions to ghost congressional districts, dead people,
<><> $100's of millions for infrastructures to nowhere
$100's of millions for road signs stamped with the shovel-ready logo (stimuus agit-prop).

Of course, there’s no example of unfettered stimulus squandering more fitting than the one named after Keystone Fiscal Kop Joe Biden himself. Government-funded Amtrak’s Wilmington, Del., station raked in $20 million in “recovery” money after heavy personal lobbying by the state’s most prominent customer and cheerleader. In return, the station (which came in $6 million over budget, according to The Washington Times) renamed its facility after Biden.

This is the Obama/Biden stimulus legacy bequeathed to our children and their grandchildren. Sheriff Joe and his plundering boss need to be run out of town on a rail.

When I lived in Greenville Delaware, Joe Biden is house was my one and a 1/2 mile mark on my 3 mile morning run and I always assumed between him and his wife they could afford that beautiful estate.

How the h*** could you be that much in debt?

The State of Georgia installed at least eight (8) signs every quarter mile of the entire 110 miles of Route I-95 in the State declaring the road a construction zone with double fines for speeding over the 70 mph speed limit. The signs disappeared in 2018 with no apparent construction ever taking place.

When leaving office Barack and Mike received a $65 Million dollar advance on a book deal. No one in their right mind believes that the publisher is going to make a profit or even break even. More likely they will lose 10s of millions. WHY make such a deal that is a sure loser? Doubtful the Obama’s can deliver something to make up the loss. Perhaps the money is being laundered through the publishing company from some billionaire as a reward for services rendered.