EXCLUSIVE: Ilhan Omar laughs off whether her book deal beats John Bolton's $2M advance as upcoming memoir will include 'her personal life' (but will it mention affair with aide and marriage to her 'brother'?)
Daily Mail ^ | 3/06/20 | Ben Ashford

Promising an 'intimate and rousing' account of her trials, tribulations and inspirational journey from war-torn Somalia to the United States Congress, Ilhan Omar's new book has all the makings of a bestseller.

But what is less certain, is how much the leftist firebrand will earn from her upcoming memoir This is What America Looks Like - or whether it will finally address questions about her multiple marriages and torrid affair with her married aide.

Outside the Capitol on Wednesday, Omar was asked whether her book advance would exceed the reported $2 million pocketed by President Trump's former national security adviser John Bolton for his book.

'We will have to find out,' Omar, 38, laughed as she walked away with her aides.

Her literary agent Steve Ross was even less forthcoming, failing to respond when asked whether 'squad' member Omar would write about the string of scandals that have dogged her personal life and threatened her bid for re-election.

If any of these people told the unvarnished truth, they would have a best-seller that people would actually read, instead of a tribal-marker doorstop.

These book deals are bribes and illegal campaign contributions. Politicians should not get an advance. Make them go through the process of selling them.

Her publisher, Harper Collins, is owned by News Corp.

Omar will laugh merrily just before she detonates in the well of Congress. She’ll probably do it on camera. Watch for the other Squaws to be absent that day. All probabilities will be amplified if her seat is in jeopardy.

She represents all muslims.

Really. I thought she was under federal investigation/s? She’s behaving the opposite, like she has been given the key to the city. She’s wearing the Armor of Allah right now.

She has never denied being married to her brother

9 posted on 03/07/2020 5:07:20 AM PST by AppyPappy (How many fingers am I holding up, Winston?)
[ Post Reply | Private Reply | To 1 | View Replies]
To: All
She's a strange one. The raghead "says" she was raised in Third World ****hole Somali
and lived in a Kenyan refugee camp before coming to America. How is it, then?
<><> she speaks impeccable English without a trace of accent,
<><> is an expert on the US Constitution,
<><> knows the Pay-Me-I'm-A-Victim scam trigger words like the back of her hand,
<><> is proficient at working the intricacies of the US political system and got elected to Congress.
<><> is brainwashing others about "racism in America."
<><> the refugee lives in a penthouse, never wears the same out fit twice, has an agent and a book contract.

Omar (D-MN) said on Capitol Hill last Thursday at a panel discussion she hosted focused on “racial justice:”
<><> that "people should accept" that American power comes from racism,
<><> that (cough) “our" history is built on the oppression of black bodies.
<><> slavery, Jim Crow, redlining to mass incarceration to voter suppression, is part of the foundation of American power,
<><> her task as an organizer is to call out the specific incidences of racism,
<><> Omar said blacks have been targeted by the FBI, including Martin Luther King (did she march with MLK?)
<><> she referenced Fred Hampton, the Chicago Black Panther killed in a police raid in 1969. (was she living in Chicago at the time?)

She began her remarks by quoting activist Angela Davis, who she once claimed as her idol.
“In a racist society it is not enough to be non-racist,” Omar said. “We must be anti-racist.
Angela Davis spoke those words nearly 50 years ago, but they continue to echo today,” Omar said.

10 posted on 03/07/2020 5:43:05 AM PST by Liz (Our side has 8 trillion bullets; the other side doesn't know which bathroom to use.)
[ Post Reply | Private Reply | To 1 | View Replies]
To: All
Ilhan Omar Pushing Agendas Of 57 Islamic Terror Countries
Strip Omar's citizenship (if she has it). Americans will not tolerate this Congress-thingy
a paid foreign agent, in cahoots with Americas' sworn enemies....despots, terrorists and dictators.

The rag-headed creep has an agenda no one could ever imagine.
Omar has been very busy-----setting up her world-wide terrorist connections. 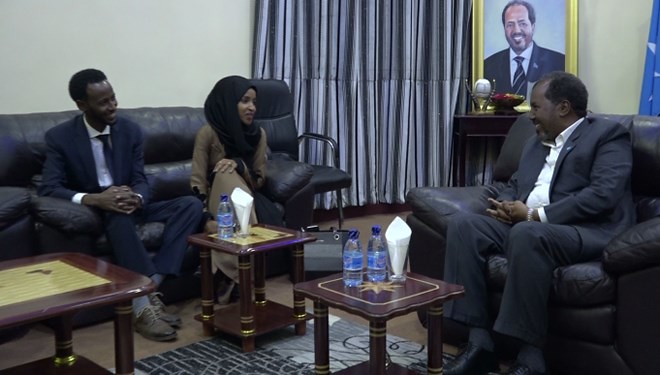 Just a few weeks after her US election to Minnesota's state legislature, she was back in Somalia, the homeland "she fled in fear."
The sap-happy Omar is chatting up then-Somali President Hassan Sheikh Mohamud, a favorite for re-election.
He reportedly invited her---a US state legislator--- to appear beside him prior to the Somali (cough) election taking place.

What was the deal she made with the corrupt-ridden Somali govt? Are the violent Somalians she once fled,
privy to US security reports from Omar's current position on the House Foreign Affairs Committee? Duh.

Penlosi put Omar on the US Foreign Affairs Committee.....at Omar's request.
Erdogan and his Muslim cohorts know all they need to know.......thanks to Omar and Penlosi.

All very good, Liz. There’s enough here to warrant lots of questions to be asked in various committees in the House. Even good old fashioned investigative journalists could begin and keep inquiries going to get her out of her seat and out of the country!

I would start here:

“”A foray into foreign politics, should have disqualified her from getting US security clearance.””

No one is curious enough in the House to ask?

Bet she doesn’t mention that she lied to get into the country and her real name is not Omar.

13 posted on 03/07/2020 6:07:27 AM PST by Lurkinanloomin (Natural Born Citizens Are Born Here of Citizen Parents_Know Islam, No Peace-No Islam, Know Peace)
[ Post Reply | Private Reply | To 1 | View Replies]
To: Thank You Rush
A foray into foreign politics should have disqualified her from getting US security clearance. Why is it no one is curious enough to ask?

<><> ASK HER THIS: how many organizations does she belong to that advocate the overthrow of the US govt?

<><> Uncovering the financial facts that she is being financed by terrorist Muslim countries, should blow her out of Congress.

A public-interest group that investigates and prosecutes government corruption has filed an ethics complaint against radical Democratic Congresswoman Ilhan Omar. On Tuesday, Judicial Watch hand-delivered an ethics complaint to David Skaggs, chairman of the U.S. House of Representatives Office of Congressional Ethics, calling for a full investigation into potential crimes tied to allegations that the Minnesota lawmaker may have married her biological brother.

Judicial Watch claims it has “substantial, compelling and, to date, unrefuted evidence” that Omar may have committed crimes in violation of both federal and state law. JW president Tom Fitton says their complaint is based on social media posts and sources within the Somali-American community.

“The information appears to give probable cause to investigate Omar for eight instances of perjury, immigration fraud, marriage fraud, up to eight years of state and federal tax fraud, two years of federal student loan fraud and even bigamy,” Fitton explains.

“To be clear, the facts describe perhaps the most extensive spree of illegal misconduct committed by a House member in American history,” he adds.

“Although she is ideologically quite noxious, she engages in this sly dishonest anti-Semitism,” says the group’s president. “She’s viciously anti-Israel. She supports a supposedly U.S. organization that the U.S. government has believed to be a front for the terror group Hamas.”

She should have been in jail and on her way out of the country.

Yes, she merely declines to answer, and her honchos declare only that "it is not proven."

Someone should ask her whether, since Islam allows men to take four wives, she believes that women should be able to take four husbands. Then ask whether she is ready to renounce Islam or women’s equality?

What publisher is paying that trash for this trash?