The Conspiracy Theory Against the USA That Has Been Going Around in the Chinese Chatrooms; How the USA Brought the Coronavirus to China
WeChat | 04/11/2020

I just got hold of this message circulating in China's WeChat Messaging System. It is now circulating around Viber, WhatsApp and other messaging system like the Coronavirus itself.

This is what the Chicoms have been propagating to people around the world to being condemnation to America and shift the blame from themselves.

The United States must surrender 5 special soldiers who were picked up by the special plane after the Wuhan Military Games!

In the United States, you have to surrender 5 special soldiers who were returned by a special plane after the Wuhan Military Games, and let WHO verify the truth!

To find out whether the virus originated in the United States, it is actually very simple. You only need to have the WHO re-examine. The US military sent a special plane from Wuhan to receive whether the five soldiers had the same C family new crown pneumonia as the Wuhan patients. ? !!

Now, the focus of suspicion in Japan, Taiwan, Russia, Germany and other countries is:

1. At the end of October 2019, why did the United States spend large capital to send a special plane to pick up five sick athletes from Wuhan?

2. The performance of the US team was incredible. It scored 0 points and 0 gold medals (133 gold medals for the Chinese team), ranking 35th. Is the 369 soldiers sent by the United States a special group who cannot shoot? Biochemical soldier? The most questionable is why the United States used special planes to take away five sick athletes from Wuhan, because the military games were over at that time. If they were suffering from common diseases, why not wait 2 days and return to the United States with more than 360 soldiers ?

Besides, I really want to go home, why not take a regular civil airliner at Wuhan International Airport!

However, if these soldiers are biochemical soldiers who accidentally poisoned themselves when they were poisoned after the military games were over, they must return to the United States before the illness worsens, if they find fever and other symptoms, otherwise, once the Chinese side finds The import is a serious infectious disease. Not only has the American conspiracy been defeated, the Chinese side will quickly close the city, and the US side will also face extremely serious political consequences.

Therefore, we must send a special plane as soon as possible to pick them up. One is that their serious illness will cause the Chinese side to be vigilant, and the other is that cross-infection will occur if they return on the same plane with other 360 US soldiers. Now, the United States is required to surrender the five American soldiers and check whether they have suffered the same C family virus as the Wuhan patients.

The problem is that those five people have evaporated.

There are five families of neocrown virus as the ABCDE family. The AB family is a parental virus, the C family is their son, and D and E are the sons of C.

In the 80,000 cases in mainland China, there is only the C family, while in the United States, ABCDE is all. C is the son of AB. Without parents, how could he have a son?

In late October, the Wuhan World Military Games was held, and American soldiers went shopping. In November, patients with new crowns appeared in Wuhan, and now it is a worldwide outbreak.

2. Is the seafood market really the source of the epidemic?

3. What is the purpose of the US Biochemical Weapons Laboratory to develop and synthesize coronaviruses?

4. Why did the U.S. largest biological and chemical weapons base close in August last year?

5. Why did the American Institute of Stone XX team contribute thousands of Chinese chrysanthemum?

6. Gene sequencing, why is there only a C family virus in China? In the US case, ABCDE is all.

7. The director of the US Centers for Disease Control and Response said that in the past there were some cases in the United States that were thought to have died from the flu, but actually died of infection with the new crown virus. Can the medical records of these deceased be published?

With all the above questions, I hope the United States will give the world an account.

Please forward this article to everyone!

No matter how busy you are, please take 1 second to put it in your circles! Maybe your friends need it too! Thank you!

The Chinese government lies through its minions.

Yes because the government always tells the truth. Trust me no one buys it there.

Prepping their people for a war they just started against the US.

They’ll find out they’re NOT dealing with their buddy obama this time around.

Get used to it, they make up a very large army.

watch this:
The Origin of the Wuhan Coronavirus
https://www.youtube.com/watch?v=Gdd7dtDaYmM

First floated by the CCP in March of 2020

If it weren’t Easter weekend, I would say what I really would like to say.
Let’s leave it at screw China!!!!

Projecting itself (CCP) unto the rest of the study.

They’ll find out they’re NOT dealing with their buddy Obama this time around.

The Communist Chinese have played their attack on the West brilliantly. They have brought the greatest, strongest country in the history of the world to its knees in less than a month ... and without firing a shot (or a missile). And there remains widespread disagreement on how long America will stay paralyzed. It's clear they know us better than we know ourselves. 26 posted on 4/4/2020, 10:28:38 AM by glennaro

Earlier this month, Tucker Carlson did a segment on the origin of the coronavirus. Carlson, who has been pretty aggressive in his coverage of the virus, pointed out a Chinese research paper (since pulled by the author) which claimed the virus could not have arisen at the Wuhan wet market because the horseshoe bats where the virus arose were not for sale at the market. In fact, the bats are not naturally found anywhere within 900 miles of the market. However, bats were being studied for viruses they carried in two labs including one just a few hundred meters from the market.

The abbreviation for Bat Soup is BS~! 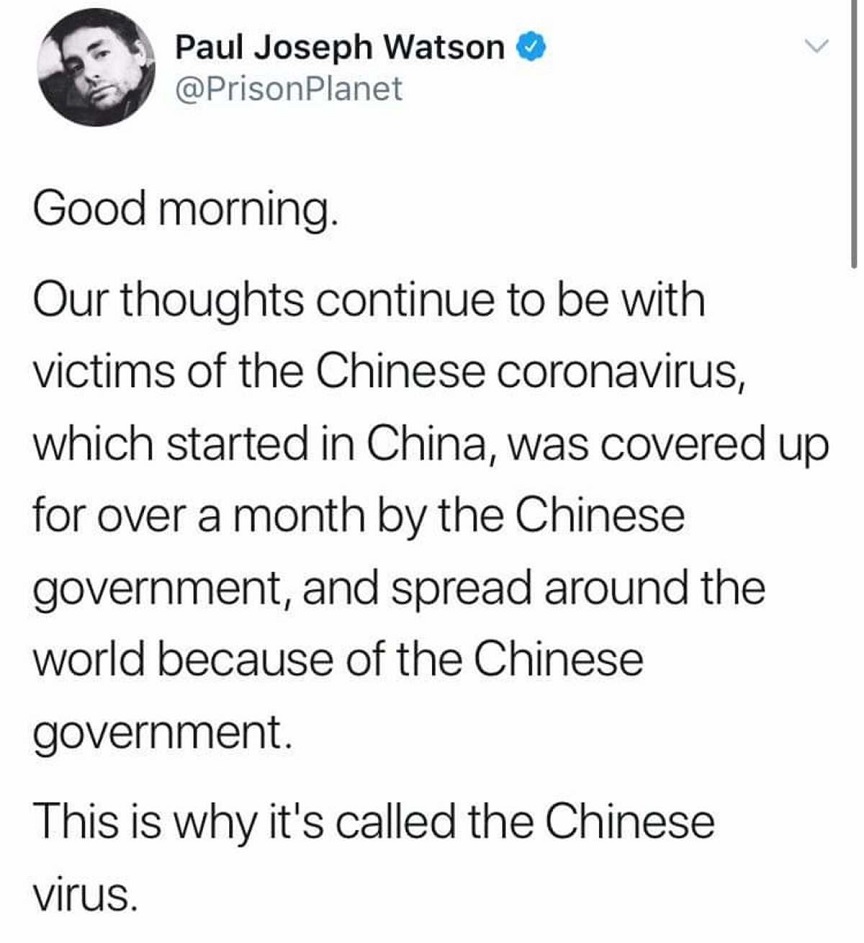 Novel coronavirus cases could have been reduced by 95 percent had China responded to the outbreak just three weeks earlier than it did, a March 13 study by the University of Southampton has found. 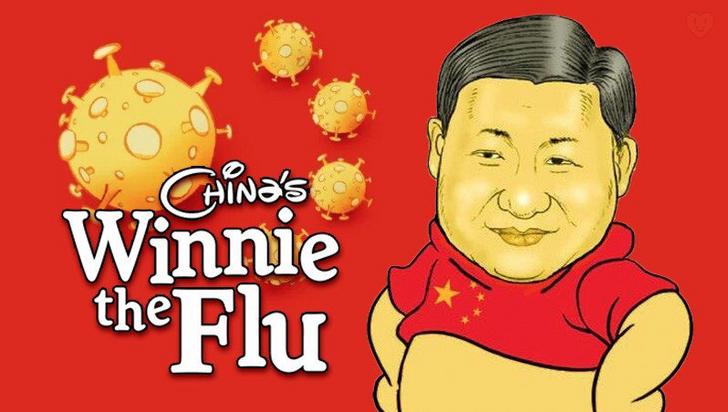 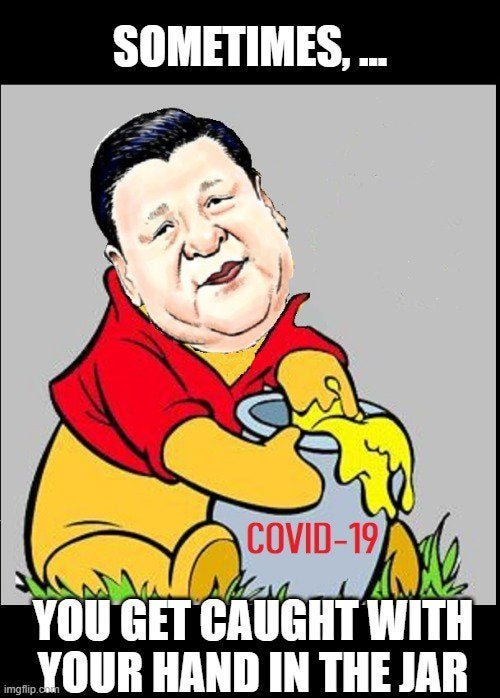 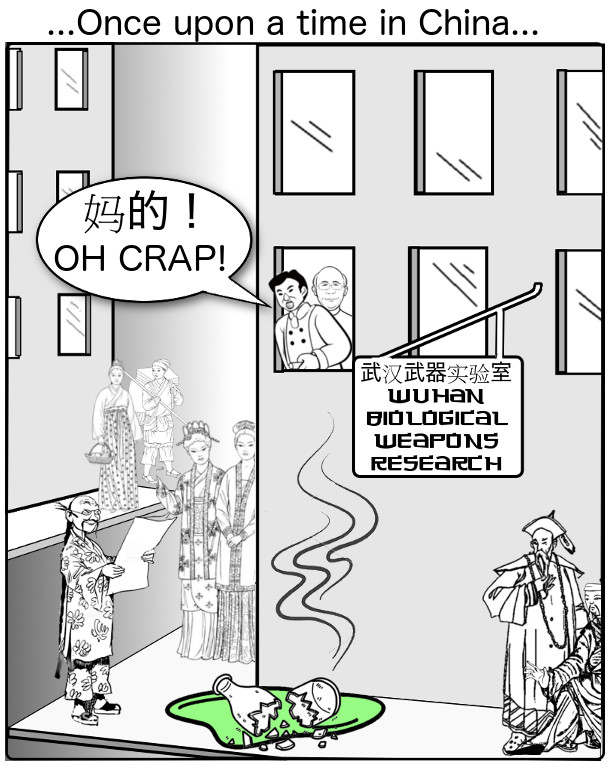 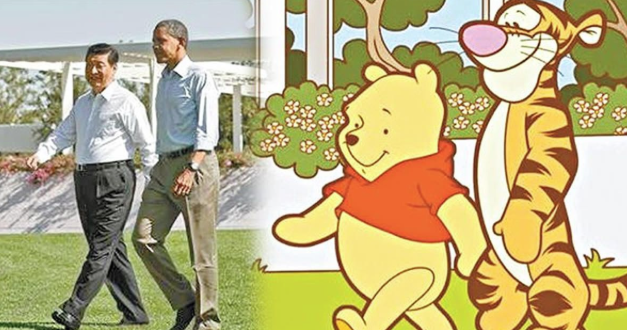 RE: At the end of October 2019, why did the United States spend large capital to send a special plane to pick up five sick athletes from Wuhan?

Is this a fact? Or is this a fabricated piece of misinformation?

What was that special plane? where was this reported last year?

My (unsourced) take on it:

1) The source is, in fact, America. Recall some shenanigans with American professors and Canadian folk (because they were an alternate transfer source), when people were being prosecuted for dealing in a deadly bioagent with China? This all came into the news two months before a big outbreak in Wuhan.

2) So China got it from us, was to bring it into their Wuhan weapons lab, and either a) screwed up, or b) weaponized it more and screwed up.

So in a way, they may well be right. We would be the actual source.

And we would be right, too. You, China, either willingly or (more likely) accidentally let it loose.

The biggest mistake the CCP made.

16 posted on 04/11/2020 10:59:51 AM PDT by Biggirl ("One Lord, one faith, one baptism" - Ephesians 4:5)
[ Post Reply | Private Reply | To 4 | View Replies]
To: SeekAndFind
Ok wait a sec - it seems that some of this is true. There was some sort of international athletic event in Wuhan in late Oct. Yes, USA sent a team of military athletes. Yes some of them got sick over there. They came and went from SeaTac airport.

If the serology testing shows a big number of west coast people with antibodies that means there was a west coast infection before January. How they get it?

Anyhow - easy for the chicoms to use this as a scapegoat and to deflect responsibility.

Prior to this I would take note of the massive PLA. I would guess that if an actual War with china took place that we would win but it would require use of WMDs to overcome that massive force.

With this virus I think i we’re passed that and that changes everything.

If China has actual design on attacking America or War, they had better be prepared for seeing the full arsenal of our weapons.

This is a fight for survival and I see no point to holding anything back.

RE: The most questionable is why the United States used special planes to take away five sick athletes from Wuhan, because the military games were over at that time. If they were suffering from common diseases, why not wait 2 days and return to the United States with more than 360 soldiers ?

OK, riddle me this — if these so called “Biochemical soldiers” were already infected when they were participating in the games, they should have also infected other athletes, not only Chinese.

So, can anyone explain to me why the outbreak ONLY started in Wuhan first and it did not occur SIMULTANEOUSLY at the same time in other places?

Were these 5 athletes kept in separate quarters during the games?

RE: So in a way, they may well be right. We would be the actual source.

That’s not what the story circulating is telling us.

The story tells us that the USA, *KNOWING* that these 5 athletes were infected, PURPOSELY sent them to China to infect the Chinese at the Wuhan Games.