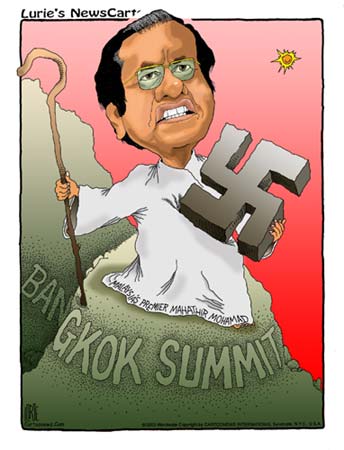 He, too was known as a "moderate"

If "militant Islam is the problem, moderate Islam is the solution," as I often argue, how does one differentiate between these two forms of Islam?

It's a tough question, especially as concerns Muslims who live in Western countries. To understand just how tough it is, consider the case of Abdurahman Alamoudi, a prominent American figure associated with some sixteen Muslim organizations.

FBI spokesman Bill Carter described one of those, the American Muslim Council, as "the most mainstream Muslim group in the United States." The Defense Department entrusted two of them (the Islamic Society of North America and the American Muslim Armed Forces and Veterans Council) to vet Islamic chaplains for the armed forces. The State Department thought so highly of Alamoudi, it six times hired him and sent him on all-expenses-paid trips to majority-Muslim countries to carry what it called "a message of religious tolerance." Alamoudi's admirers have publicly hailed him as a "moderate," a "liberal Muslim," and someone known "for his charitable support of battered women and a free health clinic."

But this image of moderation collapsed recently when an Alamoudi-endorsed chaplain was arrested and charged with mishandling classified material; when Alamoudi himself was arrested on charges of illegal commerce with Libya; and when Alamoudi's Palm Pilot was found to contain contact information on seven men designated by the U.S. government as global terrorists.

Distinguishing between real and phony moderation, obviously, is not a job for amateurs like U.S. government officials.

The best way to discern moderation is by delving into the record, public and private, Internet and print, domestic and foreign, of an individual or institution. Such research is most productive with intellectuals, activists, and imams, all of whom have a paper trail. With others, who lack a public record, it is necessary to ask questions. These need to be specific, as vague inquiries ("Is Islam a religion of peace?" "Do you condemn terrorism?") have little value, depending as they do on definitions (of peace, terrorism).

Wrong! Conversion to another religion is the solution. Wake up, Daniel.

Moderate Islam is palatable for liberals...

It is the means by which the real Islam...the Middle Eastern version...from Islam's heartland...
from Mecca from the Koran written in Arabic...can then be introduced to correct the mistakes of the moderate version...

Once the moderates take over and create the infrastructures or (take over existing ones)
Then the real muslims imams scholars and mullahs and their religous police and shock troops move in...

And anyone else can either live under Dhimitude as "dhimmies" or...face the consequences...
look to the Sudan...and you can see the future of any culture that comes to be dominated by Islam....and Sharia Law
imo
5 posted on 11/25/2003 6:29:50 AM PST by joesnuffy (Moderate Islam Is For Dilettantes)
[ Post Reply | Private Reply | To 1 | View Replies]
To: wtc911
ping

This is indeed the catch. There some real moderate Muslims, but there are too many phony ones, who just pretend, like the Islamic chaplain they are talking about.

The problem is islam, not the billion plus degrees of interpretation.

Would freepers feel safe if 10 "radical" satanists were removed from their neighborhood, while the other 90 "moderate" satanists remain to worship the same "holy" books as the "radicals"?