DES MOINES  To the disappointment of many Democrats, this year's presidential election no longer looks like a replay of 1992.

A USA TODAY/CNN/Gallup Poll Friday through Monday shows that Bush's courting of conservative Republicans and the brightening picture for economic growth and the stock market are delivering two advantages that his father didn't have. Now, Bush has the approval of a 54% majority for his handling of the economy  a signature reading of a president's political health  and a committed core of supporters.

TOPICS: Front Page News; News/Current Events; Politics/Elections
KEYWORDS: 2004; gwb2004; polls; susanpage Navigation: use the links below to view more comments.
first 1-20, 21 next last
1 posted on 01/07/2004 2:50:44 AM PST by kattracks
[ Post Reply | Private Reply | View Replies]
To: kattracks
Wonder how Jorge will do if he gets his precious illegals voting rights fast enough?
2 posted on 01/07/2004 3:17:15 AM PST by dagnabbit (Suport Amnesty 2007 ! For illegals arriving after Bush's 04 amnesty. It's never too early to care.)
[ Post Reply | Private Reply | To 1 | View Replies]
To: kattracks
I love reading good news, but I'm starting to hate these stories -- I worry about complacency.
3 posted on 01/07/2004 3:19:18 AM PST by pettifogger
[ Post Reply | Private Reply | To 1 | View Replies]
To: pettifogger
Don't worry. Even if Rove thinks Bush will have a cakewalk he knows the Senate nominees won't and he'll spend all his time on those-- which is about the same thing as spending all his time on Bush's re-election since all these Republicans are wrapping themselves around Bush 100%.
4 posted on 01/07/2004 3:58:59 AM PST by GraniteStateConservative ("Howard Dean is incontrovertible proof that God is on Bush's side in the 2004 election"- Dick Morris)
[ Post Reply | Private Reply | To 3 | View Replies]
To: pettifogger
This is not good news. As a matter of fact, it is not news at all...it is propaganda. Don't get me wrong, it is great the President will trash Dean, or any other dem candidate, but that is not what this story is about or why it was published.

The USA Today is spinning hard to try to destroy the Dean candidacy so something closer to a legitimate dem candidate is in the race. This is Clintonistas pushing for Clark.
5 posted on 01/07/2004 4:27:18 AM PST by blanknoone (No, I will not capitalize 'france'...they don't even deserve that little respect.)
[ Post Reply | Private Reply | To 3 | View Replies]
To: blanknoone
"This is Clintonistas pushing for Clark."

Exactly. Whoever wins the nomination gets to put their own loyalists in charge of the DNC and it's money. The Clintons want to make sure that it will be someone who will support Hillary when she announces.

Or at least bring him to the negotiating table. Either way the Clinton mafia wins.

8 posted on 01/07/2004 5:32:14 AM PST by VRWC_minion (Opinions posted on Free Republic are those of the individual posters and most are right)
[ Post Reply | Private Reply | To 7 | View Replies]
To: kattracks
Dean is the most unqualified Dem candidate I've ever seen in over fifty years of looking at them. That speaks volumes for the mental mindset of the Dems nowadays who have abandoned sanity for fanaticism. Dems who think that Dean is a moderate should look at all his positions. This country's major leftist publication "The Nation" magazine would approve of them.
9 posted on 01/07/2004 5:54:03 AM PST by driftless ( For life-long happiness, learn how to play the accordion.)
[ Post Reply | Private Reply | To 1 | View Replies]
To: kattracks
President Bush leads Democratic front-runner Howard Dean by 22 percentage points in the latest USA TODAY/CNN/Gallup Poll.

But, but, but Chris Matthews just told me yesterday that Bush only had a 5 point lead against Dean, which is within the margine of error, he gleefully pointed out.

He said the nation's close political divide means the two candidates are almost sure to finish within 4 or 5 percentage points of each other. A Reagan-style landslide would be "impossible" today, Dowd says. [Dowd is a Bush strategist]

I think a Reagan-style landslide is possible today, but I'm no expert. I think Rove et. al. will approach this election as it-will-be-very-close and sling the sludge just as feverishly as MoveOn.org, DU, the NYT, DNC, etc., etc.

So why does he need to payoff illegals to grab Latino votes?

13 posted on 01/07/2004 6:21:04 AM PST by montag813
[ Post Reply | Private Reply | To 1 | View Replies]
To: kattracks
The poll you've posted says that Pres. Bush is standing tall leading into the election. My sense is that he has an extremely consistent group of about 51% who have stood with him EVEN in the harder times. My theory is that the slug-fest election aftermath in Florida in 2000 absolutely solidified some folk's support for him. Then they had that support tested again by the events of 9/11, and then again at the start of the Iraq War. They haven't wavered since.

51% is impossible for the Dems to overcome. 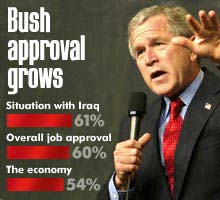 14 posted on 01/07/2004 6:53:59 AM PST by xzins (Retired Army and Proud of It!)
[ Post Reply | Private Reply | To 1 | View Replies]
To: dagnabbit
What is/was your reaction to President Reagan's 'blanket amnesty' program -- were you equally as disparaging; equally as willing to 'dump' President Reagan (either then or now)?

[FYI: President Bush has advocated the policy he plans to announce today since his days as the governor of Texas -- where have you been?]
15 posted on 01/07/2004 7:53:10 AM PST by DrDeb
[ Post Reply | Private Reply | To 2 | View Replies]
To: kattracks
shows that Bush's courting of conservative Republicans

By signing CFR (and thus trashing the 1st Amendment)? By signing a mega-million dollar prescription drug entitlement? By increasing farm subsidies by 80%. By not vetoing a single piece of pork-barrel legislation? By giving $15 billion to sub-Saharan Africa (ostensibly to fight AIDS). By threatening to sign the (so-called) Assault Weapons renewal bill?

The only way to change that dynamic is to bring NEW VOTERS into the mix.

Republicans should fight like crazy for their 50% of any new voters.

A REPUBLICAN landslide (popular vote) is indeed an impossiblity, but a democrat one is a possibility. The electoral college is another matter. R's can still win big, but not 49 state big, at least not for a long time. There are too many big, totally loyal D states.

If you think landslides are impossible think about this: The D's are likely to lose, decisively, but not landslide with Dean. If the R's put up someone as far out there as Doctor Demento is, it would be a landslide the likes of which has never been seen before...I'm talking all 50 electorally and a much bigger blowout popularly than has ever been seen before. I know, its hard to imagine someone as far out there on our side, but I'm sure if we searched long enough and hard enough, one could be found...but we'd probably have to go to someplace like Vermont.