Why does Sen. John Kerry (D-Mass.) talk incessantly about Vietnam?

Obviously, it has given him a great political advantage in past campaigns, and he hopes it will do the same in his race for the White House.

But there might be another reason. Perhaps more than any other presidential candidate in recent memory, Kerry seems to be living in another time, playing a movie of Vietnam over and over in his mind.

In fact, he is often playing an actual movie of Vietnam over and over on his television.

Consider this scene from a remarkable profile of Kerry published in the Boston Globe in October 1996, when Kerry was in a tough re-election battle.

Kerry told reporter Charles Sennott the oft-repeated story of the February 1969 firefight in which Kerry attacked the Viet Cong who ambushed his Swift boat.

Kerry won the Silver Star, as well as a Purple Heart, for his efforts.

But the story wasn’t about the firefight itself. It was also Kerry’s reaction to it.

The future senator was so “focused on his future ambitions,” Sennott reported, that he bought a Super-8 movie camera, returned to the scene, and re-enacted the skirmish on film.

It was that film, transferred to videotape, that Kerry played for Sennott.

“I’ll show you where they shot from. See? That’s the hole covered up with reeds,” Kerry said as he ran the tape in slow motion.

Kerry told Sennott that his decision to re-enact the fight on film was no big deal — “just something I did, no great meaning to it.” But it’s clear that the old movie is a huge deal.

“Through hours of watching the films in the den of his newly renovated Beacon Hill mansion, it becomes apparent that these are memories and footage he returns to often,” Sennott wrote.

“Kerry jumps repeatedly from the couch to adjust the Sony large-screen TV in his home entertainment center, making sure the picture is clear, the color correct. He fast forwards, rewinds and freeze-frames the footage. His running commentary — vivid, sometimes touching, sometimes self-serving — never misses a beat.”

In John Kerry’s home entertainment center, it’s always 1969. It’s sometimes that way in his campaign, too.

Is Kerry’s the only campaign to play Jimi Hendrix — specifically, “Fire” from the 1967 album “Are You Experienced?” — at rallies?

Other candidates — like John Edwards, with his theme song, John Mellencamp’s “Small Town” — aren’t exactly cutting-edge, but they have chosen somewhat newer stuff.

And what about the music on Kerry’s bus? Before the Iowa caucuses, Washington Post reporter Ceci Connelly described the candidate hanging out on the bus with Peter Yarrow, his old antiwar friend from Peter, Paul, and Mary.

“Pedro, sing us a song,” Kerry ordered one day. Yarrow picked up a guitar and began to play and sing — and later waxed nostalgic about the antiwar rallies he attended way back when with Kerry and Sen. Eugene McCarthy.

Earlier, Connelly wrote, when Yarrow sang “Puff the Magic Dragon” at an event in a private home in Ames, Iowa, “Kerry lifted his fingers to his mouth for a quick toke on an imaginary joint. You can almost see his thick mane of silver hair returning to the shaggy brown do of those days.”

Even Kerry’s latest sound bite, the speech in Ohio on Tuesday in which he described President Bush as a “walking contradiction,” was apparently a reference to the old days.

In this case, it was Kris Kristofferson’s “The Pilgrim, Chapter 33 “ from 1970, with its line, “He’s a walking contradiction, partly truth and partly fiction.”

This man is living in a time warp. No wonder Kerry sees any conflict — Gulf War I, Afghanistan, Gulf War II — as a potential Vietnam. In Kerry’s world, Vietnam is running on a continuous loop on that big-screen TV — with Jimi, Kris and Peter, Paul and Mary singing in the background.

Some people become stuck in the time period in which they had their most intense experiences.

Others, perhaps with more mental or emotional flexibility, move on. Kerry seems to be the former.

At 60 years old, Kerry seems to be obsessed with the past in ways that the 57-year-old George W. Bush isn’t.

And Kerry seems far older than, say, the 71-year-old Donald Rumsfeld — a man who is always moving ahead, not inclined to lecture about the way things were 30 or 40 years ago.

Kerry’s penchant for looking back would not a good trait in a president who will have to deal with a distinctly 21st century, post-Sept. 11 world.

America faces threats that were unheard of in Kerry’s formative years. While those threats build, Kerry is turning on Hendrix, toking on an imaginary joint and telling you about Vietnam.

And just imagine the inauguration. The new president delivers his speech, waves to the crowd, and cries ...”Pedro, sing us a song!”

Byron York is a White House correspondent for National Review. His column appears in The Hill each week. E-mail: byork@thehill.com

Thanks for posting this. Now I know.

I've noticed that too, lately.

6 posted on 02/28/2004 8:26:48 AM PST by VadeRetro
[ Post Reply | Private Reply | To 1 | View Replies]
To: 68 grunt
Well, for what it's worth, his campaign also made a big play of Kerry on his Harley Davidson, Kerry in long hair standing next to John Lennon, to the music of "Yesterday," and Kerry giving his famous f'n interview to Rolling Stone.

This stuff was used for stairwell posters at NYU and, I suppose, other colleges to attract the student vote. I saw a lot of it around while Howard Dean was riding high, but it has mostly disappeared since Dean collapsed.

I'm not sure if this is Kerry's psychological hangup, or whether it's his idea of how to appeal to the youth vote, which is still nostaligic for the 1960s and the days of wine and roses and political protests.

Kerry's problem is that he seems to have a psychological need to play it both ways: Kerry the War Hero and Kerry the War Protester. In those days, oddly enough, wearing a uniform with the requisite long hair and beret to show you weren't really in the military but only mocking it was an accepted sign of disrespect. But he'll have a hard time selling such a two-faced image today.
7 posted on 02/28/2004 8:30:36 AM PST by Cicero (Marcus Tullius)
[ Post Reply | Private Reply | To 1 | View Replies]
To: 68 grunt
Iraq is NOT Vietnam!!!
8 posted on 02/28/2004 8:30:53 AM PST by tkathy (The liberal media: september 10th rhetoric in a september 11th world.)
[ Post Reply | Private Reply | To 1 | View Replies]
This man is living in a time warp.

Kerry is qualified to be the liberal anti-war candidate, circa 1968.

Aren't the neoMarxists always telling everyone else to MOVE ON?

One of the problems all parties faced in World War I was that not only their generals but their political leadership had cut their teeth in wars that involved less destructive technology and were utterly different in character. Some remembered the Franco-Prussian War, for instance, or various colonial conflicts. It took a while for people to realize that somehow they had crossed into a new era.

The baton is passed. 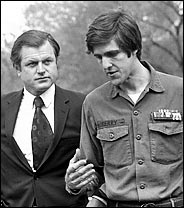 playing a movie of Vietnam over and over in his mind.

One of the DSM criteria for PTSD.

Then we had his wife's little verbal slip a while back that Kerry still has flash-backs and nightmares where he wakes up screaming.