Today's handsome hunks may owe their good looks to a sexual power shift towards the fair sex during primate evolution.

As our ancestors evolved, the ability to attract a female mate through good looks became may have become more important in the mating stakes than the ability to fight off male rivals, suggests a new study.

By analysing the shapes and sizes of facial features in chimps, gorillas and other primates, researchers in Germany and the University of Cambridge, UK, found evidence suggesting that our ancestors may have gradually sacrificed fighting for wooing.

"Our research suggests that in early humans, a face that was attractive as opposed to aggressive conferred an advantage," says Eleanor Weston at the Research Institute Senckenberg in Frankfurt, a member of the team.

She says that changes were probably driven by choosy females who began to demand handsomeness, not brute force.

Prominent canine teeth which still signify a male's dominance and fighting ability in many primates like baboons and gorillas, may have been replaced by less aggressive teeth and looks.

Broader faces with prominent cheekbones, not unlike those of contemporary movie stars including Johnny Depp, Orlando Bloom and Viggo Mortensen, were picked preferentially by females.

Weston drew her conclusions after initially studying facial features of chimps and gorillas. In most primates, males have much longer canines than females, a trait that often reflects which males are dominant. This difference was much less prominent in the chimps.

Sexual selection was starting to be driven by the attractiveness of a male's face in the chimps, believes Weston, and this tallied with development of broader faces with more prominent cheekbones, plus receding canines.

The same pattern emerged when Weston unearthed facial data on other primates. Wherever males had broader faces, their canines were closer in size to those of females. The opposite was true in males with more elongated faces.

Weston, adds she has further, unpublished data on human faces which supports her conclusions.

(It's a pet peeve of mine that so few journalists who write about evolution seem to understand the way that it actually works!)
8 posted on 05/12/2004 4:15:48 PM PDT by johnfrink
[ Post Reply | Private Reply | To 1 | View Replies]
To: RightWhale
Us handsome guys are always a point of wonder. Wouldnt it be great if women would respect us for our minds instead of our looks?..Women can be soooo shallow! 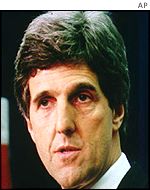 Being the handsome devil I am, I can only thank GOD it is unfair in my favor!
16 posted on 05/12/2004 4:21:20 PM PDT by Enduring Freedom (Jean Fidel Qaerry - Vietnam Veterans Against The War On Terrorism)
[ Post Reply | Private Reply | To 1 | View Replies]
To: FITZ
Well, I was blessed with neither money, looks or superior intellect. Guess I'll have to go with "big feet."
17 posted on 05/12/2004 4:21:41 PM PDT by Larry Lucido
[ Post Reply | Private Reply | To 14 | View Replies]
To: johnfrink
All that is needed to complete the "scientific proof" that you seek is for most 'scientists' in that field to agree that its a possible explanation.

A wild ass guess: a larger brain Way Back When might have been linked with a shorter "snout." And the fems were able to pick up on the fact that the Homo Erectus nerd was able to fashion a pointy stick, while the Homo Erectus jock couldn't.