Just Developing on DRUDGE - no story yet. It's just the Heart and Soul of America folks!

His Ozzness has no brain left after years of drug and alcohol abuse. To paraphrase one of his songs, forgive him, for he knows not what he does. 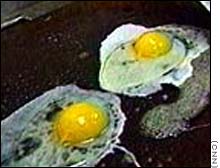 Looks like the Al Quaedas attempt to dumb down American Society with Drugs..paid off with you Ozzie.

Biting off birds' heads is ok, but lowering taxes isn't? Be comforted that people like Ozzy are coming out against Bush, trust me. The only thing that could help us more would be Pee Wee Herman, Michael Jackson and Scott Peterson all joining together in protest of our president. Cross your fingers.

i saw it at ozzfest. it really wasn't that bad - I mean we've all seen worse. It showed Mini-me wioth a red spot over his nose whilst Ozzy sang "war pigs".

If the heavy metal crowd is typical democrat, we haev little to worry about.

yes, I booed and yelled as loud as I could to keep his *** politics out of it. Sinec the general sound level was so high, I could not tell if anyone else did, but the hot chick next to me started rubbing against me...

Since when does anyone look to Ozzy for clear thought?

7 posted on 07/15/2004 8:32:58 AM PDT by saveliberty (Liberal= in need of therapy, but would rather ruin lives of those less fortunate to feel good)
[ Post Reply | Private Reply | To 3 | View Replies]
To: areafiftyone
Don't let this happen to your Children America!

Another idol with clay feet... Ossy the drug crazed pervert degeneres has his tribute....and I got mine.....

How could anyone understand it if Ozzie did bash Bush? His words come out like mush.

True and I stand by my comments as thinking comes from the mind if not brain. Or better yet, don't. You haven't done anything interesting since 1984 anyway.

16 posted on 07/15/2004 8:39:28 AM PDT by Choose Ye This Day (We're all DOOOOOOOOMED!!! < /DNC talking points>)
[ Post Reply | Private Reply | To 1 | View Replies]
To: camle
I resent that remark! I am a metalhead, through and through. I am far from a liberal! Actually, while liberalism has plenty of inroads into metal as well, I think the genre is more conservative, if not libertarian, than pop music in general. Sammy Hagar, Ted Nugent, and James Hetfield have all said they are conservative.

Ozzy, however, is a drugged-out has been. Actually, he was somewhat supportive to Bush a couple years ago. He is just jumping on the bandwagon since he has nothing much else to do. I like Ozzy's old stuff (pre-1995), but he's now washed up.

The video featured Bush and Hitler on the same screen, with the caption: "Same sh*t different a**hole," says a source. Footage of bombs dropping and Hitler marching flashed as Ozzy screamed and guitars screeched.

Ozzy also flashed a picture of Bush with a clown nose, caption: 'The White House Circus."

Other bands in the OZzzFest lineup, such as SuperJoint, expressed support of the war.

The lead singer told the crowd in a profanity laced tirade against the terrorist: "Those f**kers crashed the planes into the Towers."

The concert featured a few dedicated songs to the our men and women overseas.

That's not what he was talking about. I heard it because I was there.

What I 'believe' he ACTUALLY said was, "How boots me having some more F@CKING beers to was down this F@CKING chicken!"

I'll admit though, that it did sound like he said 'Bush' and 'Hitler' in the same sentence.