More than a decade ago, when Fred Newman and Lenora Fulani embraced Marxist ideology, they could not persuade even the Rev. Al Sharpton to run under the banner of their fringe political party in his 1992 Senate bid.

Mr. Sharpton, seeking to gain legitimacy as a candidate, began distancing himself from the two and from their New Alliance Party, as questions about his past association with them threatened to undermine his campaign and his credibility.

But in recent years, Dr. Fulani and Dr. Newman have found many of the state's top political leaders eager to court their latest organization, the Independence Party of New York.

Through the party, Dr. Fulani and Dr. Newman, who were once considered eccentric figures on the political fringe, have found new stature, to the point where Republicans like Gov. George E. Pataki to Democrats like Attorney General Eliot Spitzer and United States Senator Charles E. Schumer have courted their party's support. Today, the Independence Party is expected to endorse the re-election bid of Mayor Michael R. Bloomberg, a Republican.

The rise of Dr. Newman and Dr. Fulani from outsider status - with organizations that were as interested in psychotherapy and Marxist ideology as in electoral politics - has been part of a strategy that has resulted in their dominance over the Independence Party. The party has emerged as a powerful vote-getter in many state and local races, knocking the Conservative Party off the third line on the ballot and giving Mr. Bloomberg his margin of victory in 2001.

In recent years, Dr. Newman, a psychotherapist, and Dr. Fulani, who ran two quixotic campaigns for the White House, have, according to the party's state chairman, became the dominant force in the Independence Party's New York City branch, and have a significant influence on the direction of... 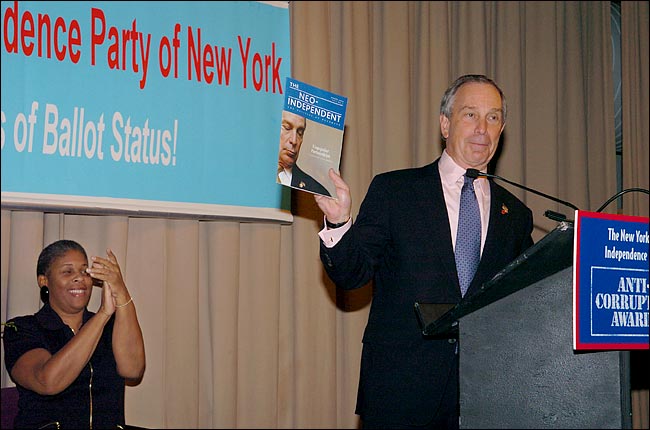 Interestingly, Hillary is the only politician in New York (Democrat or Republican) smart enough to keep her distance from the anti-Semitic Fulani. She won't go anywhere near the Independence party ballot line.

Honestly, I think that most NY voters who use that ballot line don't realize the actual nature of the party. They are thinking "I'm an Independent voter, not a Dem or Republican."

>More than a decade ago, when Fred Newman and Lenora Fulani embraced Marxist ideology

Who cares when these two registered Democrat?

The first thing to come to my mind is the movie "Escape From New York".....

FReepmail me if you want on or off my New York ping list.

Weird politics, but I think Hillary wasn't mentioned in the story.

I think if the Independence Party bumped the Conservative Party of New York from the third column on the ballot, then they probably had more than 300,000 voters use the column in the last statewide election.

The independence party is only important by virtue of its name, most people associate it with actually being an "independent".

There are enough people in NYS who can not pull the lever, no matter what, if its for a republican or a democrat, so their conscience is okay if they pull it for a "independent".

These 2 jokers are only players because they were smart enough to steal this name for their party.

I've often jokes with friends about forming a political party called "the centrists" or "the moderates" or a "none of the above" party to see if we could be influential. It was a joke, but a few people actually thought the idea was interesting.

8 posted on 05/28/2005 3:19:06 PM PDT by Sonny M ("oderint dum metuant")
[ Post Reply | Private Reply | To 4 | View Replies]
To: Sonny M
Yeah, you're right. There are two issues, for those who don't know. First, the name "Independence" confuses voters who think the candidates are independent candidates. The party started out as the Freedom Party everywhere else. Second, Fulani seized control of the party first by manipulating a party meeting and vote, and then later by, as I understand it, packing the party committee.
Actually, I guess there is a thrid thing. In New York, candidates can run on multiple lines and total all of their votes. This is what makes minor parties important.
9 posted on 05/28/2005 8:39:03 PM PDT by NYFriend
[ Post Reply | Private Reply | To 8 | View Replies]