WASHINGTON - The House ethics committee's top Democrat, under fire from Republicans, said Friday he's unaware of any errors in his financial disclosures the past nine years.

Rep. Alan Mollohan (news, bio, voting record), D-W.Va., provided a detailed explanation of his investments a week after a conservative group questioned the accuracy of his annual financial reporting. Republican campaign officials called for his resignation from the ethics panel, but Mollohan refused to step down.

The allegations could have an impact on the ethics committee's ability to investigate wrongdoing and could be a factor in this year's congressional elections.

The committee has been unable to launch new investigations because its five Democrats and five Republicans have blocked each other from moving forward. The partisan split may become more bitter with GOP calls for Mollohan to leave the panel.

The allegations also allow Republicans to counter a major Democratic campaign theme: that majority Republicans have allowed a "culture of corruption" in the House and Senate.

Congressional Democrats want the ethics panel to investigate lawmakers who had ties to convicted lobbyist Jack Abramoff, to determine whether the members broke the rules by providing legislative help in return for free trips, restaurant meals and seats in arena skyboxes.

Federal prosecutors are conducting criminal investigations into the same conduct.

Besides the allegations against Mollohan, the senior Democrat on the House Judiciary Committee — John Conyers of Michigan — stands accused by former staff members of misusing his office by turning them into baby sitters for his children.

His office said in a statement that the baby sitting allegations refer to events nearly a decade ago, even though they were only recently raised in public. The statement said Conyers cooperated with the committee when it raised questions about the allegations two years ago, but never heard back from the panel.

The National Legal and Policy Center — a conservative nonprofit organization that promotes ethics in government through research, education and legal action — said last week it had filed a complaint in February with federal prosecutors, alleging Mollohan consistently undervalued and omitted assets in his annual reporting. The U.S. attorney's office in Washington refused to confirm whether it is investigating Mollohan.

Mollohan said the value of his property investments — owned by him and his wife — increased sharply because of rising values in Washington, D.C., and the North Carolina shore since 2000. The lawmaker said the value was offset by large mortgages, and the couple borrowed against their existing holdings to acquire new property.

In 2001, Mollohan added, the couple increased their holdings after the lawmaker inherited a share of his father's real estate holdings in West Virginia.

Mollohan said the Legal and Policy Center appeared to assert that he should have valued his holdings without regard to his liabilities.

The lawmaker said he can't address allegations that he made 250 errors in his reporting since 1996, because the center has not provided him with details.

He added, "Any claim whatsoever that these investments are in any way related to my actions as a member of Congress is categorically false."

Mollohan said his financial reports are prepared by a respected accounting firm.

"I would never be so bold as to say that there are no errors whatsoever in the 24 annual financial disclosure statements I have filed as a member of Congress. "What I will say, however, is that if there are any errors in those forms, they were inadvertent, and I am convinced that they are not material — that is, those forms provide an accurate picture of the investments, income and liabilities of my wife and me...."

Looks like a Mexican stand-off, the dems risk completely blowing their Culture of Corruption strategery all to smithereens as the dems and reps on the panel block each other and make this all the more interesting.

Not only late in the evening but on Good Friday when most people are thinking of Easter.

This is gonna get interesting.

6 posted on 04/15/2006 12:55:31 AM PDT by zbigreddogz
[ Post Reply | Private Reply | To 1 | View Replies]
To: NormsRevenge
Looks like a Mexican stand-off, the dems risk completely blowing their Culture of Corruption strategery all to smithereens as the dems and reps on the panel block each other and make this all the more interesting.

As if the stupid party would make an issue of it. If this were a Republican, there already would have been three separate press conferences by RAT congressman and senators on the matter, and it would be part of the Sunday talking points. Guaranteed not one Republican will say a word.

8 posted on 04/15/2006 4:45:25 AM PDT by jmaroneps37 (Everyday brings a new reason to distrust Hillary Clinton.)
[ Post Reply | Private Reply | To 1 | View Replies]
To: NormsRevenge
...said Friday he's unaware of any errors in his financial disclosures the past nine years.

If there were not errors does that mean he meant to do it?

10 posted on 04/15/2006 5:59:00 AM PDT by Dutch Boy
[ Post Reply | Private Reply | To 9 | View Replies]
To: NormsRevenge
Looks like Mollohan forgot this part: And -- whatever the case may be in regard to Rep. Mollohan's personal finances, the amount of money being appropriated, apparently through earmarks, from federal taxpayers to these non-profits over a short period of time is truly astounding. 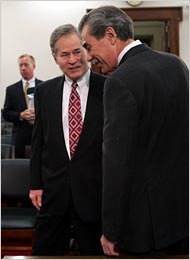 Despite significant blogosphere attention to the dubious (or, at the very least, excessive) Congressional practice of "earmarking," I'm not seeing a lot of attention on blogs today about this press release from the National Legal and Policy Center: NLPC Complaint Alleges Ranking House Ethics Committee Member Hid Assets and Funded Business Partner's Groups with Millions in Earmarks.

The National Legal and Policy Center (NLPC) today disclosed that it filed a 500-page Complaint on February 28 with the office of the U.S. Attorney for the District of Columbia detailing hundreds of ethics law violations by Rep. Alan Mollohan (D-WV).

NLPC's investigation began when its review of the Financial Disclosure Reports of House Appropriations Committee members showed a sharp increase in Rep. Mollohan's assets from 2000 to 2004. A closer examination revealed that Mollohan and his wife had more than $2,000,000 in real estate investments with a former staffer, Laura Kuhns, and her husband.

The NLPC effort began in May 2005. Over the ensuing months, NLPC staff filed Freedom of Information Act requests and examined thousands of pages of real estate, financial and legal documents. Slowly a picture of Mollohan's finances emerged that was sharply different from the one being portrayed in the Financial Disclosure Reports...

The Wall Street Journal is covering this on page one today; their story includes a response from Rep. Mollohan, who says all of his financial investments are "aboveboard" and "every one of the earmarks is held to the highest standards of accountability."Both NLPC and Wall Street Journal say the Justice Department, which declined to comment for the WSJ story, has opened an investigation.This is worth watching. The NLPC is known to be careful about details and would not make charges lightly.

And -- whatever the case may be in regard to Rep. Mollohan's personal finances, the amount of money being appropriated, apparently through earmarks, from federal taxpayers to these non-profits over a short period of time is truly astounding.

11 posted on 04/15/2006 8:21:53 AM PDT by Liz (We have room for but one flag, the American flag." Theodore Roosevelt)
[ Post Reply | Private Reply | To 1 | View Replies]
To: NormsRevenge
The disclosure reports let congressmen report their finances within broad ranges.

Thanks;thanks and thanks to all who contribute to this thread.

Another Outstanding example of a member of The Democratic Crime Syndicate.

Anyway you look at it, it is an Enron worthy income increase.