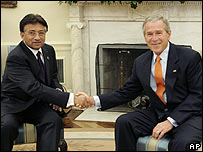 The two leaders stressed their trust in one another

US President George W Bush has said he was "taken aback" by allegations by Pakistan's president that the US threatened to bomb Pakistan in 2001. In a joint press conference after the two leaders met at the White House, Mr Bush said the first he had heard of the issue was in the day's media reports.

Mr Bush and President Pervez Musharraf emphasised their trust in each other.

Pakistan crucially supported the US in its war against Afghanistan's Taleban, which Islamabad had previously backed.

In excepts from an interview with CBS released on Thursday, Mr Musharraf said the US had threatened to bomb Pakistan "back to the stone age" unless it joined the fight against al-Qaeda.

He said the warning had been delivered by former Deputy Secretary of State Richard Armitage to Pakistan's intelligence director.

At the press conference, where Mr Bush spoke first, the US president said he knew of no such conversation.

In his response to a reporter's question on the subject, the Pakistani president said, to laughter, that he was "honour bound" with his publisher not to discuss details of his autobiography due out next week.

Some analysts say the timing of his comments on CBS may be an attempt to generate interest in the book.

But the BBC's Jonathan Beale in Washington says that, in the CBS interview, Gen Musharraf was deliberately distancing himself from the White House in the face of intense pressure within Pakistan over his close ties to Washington.

The Pakistani leader said a recent peace agreement between his government and tribes along the Pakistan-Afghanistan border was not a deal with the Taleban.

"This deal is against the Taliban. This deal is with the tribal elders," Mr Musharraf said.

Mr Musharraf also stressed that the two leaders had discussed a push for Middle East peace - something Mr Bush did not mention.

Hi. Do you know me. I "unofficially" threatened Pakistan. Then I got all of Washington aflame with Plame blame. Just how I serve my country.

And Musharruf fell for it. A new day, a new "crisis".

Armitage probably got the idea from FR.

"He said the warning had been delivered by former Deputy Secretary of State Richard Armitage to Pakistan's intelligence director. "

"What is Armitage's angle? There is an agenda there...but I can't quite figure it out."

It is either a cabinet position in a Democrat administration in 08, or Hillary has his FBI file and Dicky is into little boys.

"It is either a cabinet position in a Democrat administration in 08, or Hillary has his FBI file and Dicky is into little boys."

Ooh.. that didn't come out right.

Pakistan IS the stone age. No bombing required.

Rovian payback to Armitage and Powell for the Plame ordeal, this.

You may be more right than you intended. Weird little man. ; )

First, I would not have been surprised if the threat had been offical; it makes sense given that the Taliban and Al Queda would have ran to Pakistan and Pakistan had to make a choice if it was going to help us or help them.

(1)Was it needed to get Pakistan's cooperation (Musharraf seemed to indicate it was - he helped the US because of the threat communicated to him by Armitage). If that's true, the least that Armitage and Powell were required to do was to tell the Whitehouse everything about their "diplomacy".

Or (2)was Pakistan going to cooperate without the threat. If so, was Musharref just playing to his own domestic constituencies - "look, I had to"), and if not then why would he make up the comment.

It wil be interesting to see what the (unless we can help McPain) silent duo of Powell and Armitage say about Musharref's claim.

I'll never ever forget Musharrif's "Deer in the Headlights" look during that press conference. Whatever was said to him, he BELIEVED it completely. He's been doing a pretty reasonable job of following through with us, too.

Kudos to any and all of our administration officials who accomplished that feat.

I couldn't care less whether Bush ordered this, looked the other way, knew or didn't know... I'm simply proud of helping elect a man who hired an effective group to do what needed to be done for America - I'm proud I helped elect a LEADER.

17 posted on 09/22/2006 10:28:32 AM PDT by AFPhys ((.Praying for President Bush, our troops, their families, and all my American neighbors..))
[ Post Reply | Private Reply | To 9 | View Replies]
To: Dark Skies
Pakistan is a country with 48% literacy, as opposed to India with 60%+ and Uzbekistan with 99+%. It has no public school system. In all of Asia, only Afghanistan, which effectively has no central government, is less well educated.

Pakistan has a per capita income of just $2,400, 50% less than neighboring India.

Pakistan's #1 export is its own citizens, which it doles out as cheap labor.

And General Musharaff has the gall to accuse anyone of wanting to bomb Pakistan BACK into the stone age? Aside from a small elite in Karachi, Islamabad and a few other cosmopolitan areas, Pakistan is in the stone age. This is a country where NO infrastructure has been developed since independence.

Listen Musharaff, develop a safe public water supply and then you won't be accused of stone age nonsense.