· Saudi man's death was political, say his family
· US secret service was monitoring his activities 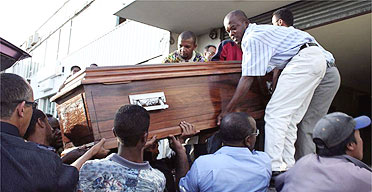 When Muhammad Jamal Khalifa was found dead at a remote gemstone mine in south-eastern Madagascar at the end of January, local police quickly put the murder down to a business deal gone wrong. The Saudi businessman, 49, had had to call in local police to evict a gang who had taken over the mine during the owner's six-year absence. All the evidence pointed towards another of the many killings that dominate the notoriously violent Madagascar gem mining business. Khalifa had been shot twice, stabbed and hacked at with an axe. His laptop, notebooks and money were missing, as were his two mobile phones. A survivor from the attack said a gang of up to 30 men had burst in to the guesthouse at the mine in Soameloka before setting upon their victim.

But it soon became apparent to the police that this was no ordinary killing. Khalifa was a man with a past, and at the time of his death he was being monitored by the US secret service.

He was married to one of Osama bin Laden's sisters, and was once the closest friend of the al-Qaida leader. He had also been sentenced to death in absentia in Jordan for allegedly funding a bombing campaign, had funded Islamic charities in the Philippines and had played a controversial role in the arrest of the gang that attempted to blow up the World Trade Centre in 1993.

a 30-strong detachment could make sense only to eliminate the bodyguards as well - in which case there would be more than one coffin.

The story reads like man that needs a new ID--the man is alive
and well.--- I hope we are still looking for him

and had played a controversial role in the arrest of the gang that attempted to blow up the World Trade Centre in 1993.

Ah, if we knew the full story of that event ...

* Mohammed Jamal Khalifa : [Mohammed Jamal] Khalifa also ran the International Relations and Information Centre. Money was embezzled through the bank account of Omar Abu Omar, an employee at the centre, to an account under the name of Adam Salih, an alias of Ramzi Yousef. His [Mohammed Jamal Khalifa's] business cards have been found in the Jersey City, New Jersey apartment that [Ramzi] Yousef [aka Adam Salih] had. They also have been found in Ramzi Yousef's Manila apartment. [Mohammed Jamal] Khalifa had started several other groups, including the International Islamic Relief Organization [IIRO] and the Khalifa Trading Industries, which U.S. investigators claim that were front organizations. ------------ December 16, 2003 http://216.239.53.104/search?q=cache:fth9KYfHFdoJ:www.nationmaster.com/encyclopedia/Mohammed-Jamal-Khalifa+Mohammed+Jamal+Khalifa&hl=en&ie=UTF-8

Abu Sayyaf is the group which killed an American soldier in the Philippines before the war - and the people that did it were in contact with an Iraqi diplomat at the time.

1993 : (WTC 1 BOMBING : BIN LADEN'S BROTHER-IN-LAW & FINANCIER, MOHAMMED JAMAL KHALIFA BANKROLLS RAMZI YOUSEF, 1993 WTC BOMBING & 9/11 CONSPIRATOR ) The bin Laden relative [Mohammed Jamal Khalifa] was involved most intensively in bankrolling Ramzi Yousef, the operations chief for the 1993 World Trade Center bombing, who conceived the plan later adopted by bin Laden to hijack airliners and fly them into the Twin Towers. ---------- "Clinton Administration Freed Bin Laden's Banker," News Max, Sunday Jan. 4, 2004; 11:43 p.m. EST
******
What was left of the Benevolence International Corporation allegedly gave logistical support to terrorists. The remains of the Benevolence International Corporation have been accused of assisting the 1993 World Trade Center bombing and the Operation Bojinka plot that was foiled in 1995. The U.S. government claims that he [Mohammed Jamal Khalifa] came to the Philippines to support Abu Sayyaf. Khalifa had married a local woman and frequently exited and entered the country for "business" reasons. Philippines authorities say that he moved money to Abu Sayyaf to pay for supplies. ------------ December 16, 2003 http://216.239.53.104/search?q=cache:fth9KYfHFdoJ:www.nationmaster.com/encyclopedia/Mohammed-Jamal-Khalifa+Mohammed+Jamal+Khalifa&hl=en&ie=UTF-8

We had Khalifa a long time ago - caught him after the 1993 wtc bombing but the Clinton admin deported him after the OK City bombing, IIRC.