Here's an interesting old post from several years ago where I was promoting the Republican party over the Democrat party because the Democrat party was not only thoroughly corrupt, but evil as well. And the evil I was referring to was primarily due to its official party support for government sanctioned wholesale slaughter of innocent and helpless life in the womb: abortion. So now if Giuliani becomes the head of the Republican party and abortion becomes the official policy of the Republican party, does the Republican party also wear the mantle of "evil?" How do we keep this evilness out of government if both major parties support abortion? And I have to ask as did my political foes of old, if both parties support abortion, feminism, homosexualism, hate crimes/thought crimes legislation, gun control, illegal immigration, etc, what's the difference?

The Democrat Party is beyond corrupt, It's also evil.

And what is this evil that triumphs when good men do nothing? What are we really talking about here and is it worth fighting for? Is it worth turning our heads and allowing evil to continue on while we do nothing? (and I count voting for a third party candidate when knowing that he has absolutely no chance of defeating the Democrat, and worse, actually planning and hoping to knock out the Republican candidate who otherwise might have defeated the Democrat, as doing nothing).

The Democrat Party is thoroughly corrupt. There is no question about that, but it's way beyond corrupt. It's also evil.

Waco was evil. The killing of innocent men, women, children and babies is evil. Torturing them for weeks on end, gassing them, and then burning them alive is pure evil. This was perpetrated by a corrupt and evil Democrat Administration and covered-up by corrupt and evil Democrat Congressmen and Senators, many of whom you are saying should be allowed to remain in office even today.

And as bad as that is, it pales in comparison to the Democrat government sanctioned and funded wholesale slaughter of the most innocent life of all, the murder of innocent human life in the womb. This is evil. Pure evil. And this evilness is openly perpetrated by a thoroughly corrupt and evil Democrat Party. The same corrupt and evil Democrat Congress and Judiciary whom you are now saying deserve to remain in office.

IMHO, allowing these Democrats to remain in power is aiding and abetting the corruption and treason, and is acting as an accessory before and after the fact to the murderers of innocent human life. Is doing nothing and allowing this evil to triumph evil itself?

I love my country. I love the Constitution. I love life. I love God. I know that the Democrats hate my country, hate the Constitution, hate God and hate human life. I see that the only Party capable of blocking and defeating the evil Democrats is the Republican Party. I see that many races are so close that as little as a one percent siphon of conservative votes to a third party could be the difference between success and failure. I see allowing a Democrat to remain in power when it could have been prevented as a triumph of evil.

Great repost, with the 08 elections ramping up! In just a decade or two, the Democrat party has transformed itself into defacto socialism right under our very eyes and with little concern shown by many. To our great detriment.

We bust our butts between now and the primaries to insure that a conservative gets the GOP nomination. There is NO OTHER WAY.

“Waco was evil. The killing of innocent men, women, children and babies is evil. Torturing them for weeks on end, gassing them, and then burning them alive is pure evil.” 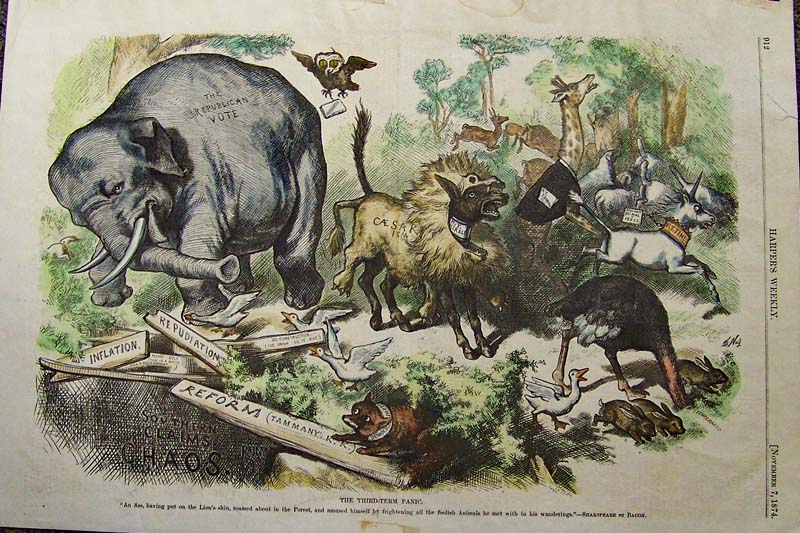 We have always taken for granted that the country-club Republicans will always siddle toward the country-club Democrats and their auxiliaries in academics and the media. Guess we will have to appeal to what they hold most dear, their pocket books. My question is: Is Rudy really any worst at heart than Gerry Ford, whose ghost proved to be amazingly unlike his public image?

9 posted on 05/16/2007 12:41:57 PM PDT by RobbyS ( CHIRHO)
[ Post Reply | Private Reply | To 1 | View Replies]
To: Jim Robinson
The Democratic Party has become a national version of the old big city political machines. They hand out favors to blocs of voters in order to obtain votes that will keep them in power. The bigger and more intrustive the government, the more favors and resources they can collect. It's corrupt to the very core.

The GOP sometimes does this as well, of course, and there are factions within the GOP that are just as cynical. The difference is it remains controversial within the party. There is still a certain amount of respect for freedom, individuality, and the principles of limited government upon which this nation was founded.

While "machine" methods are seen as at best a neccesary evil by most Republicans, to the Democrats they are the key principle behind their methods.

Before I get hammered, let me say that in the primaries I’d pull the lever for Duncan Hunter in a heartbeat just as I would in the national election. But I also will not allow a Democrat to become Commander in Chief of our Armed Forces.

So with that, when Rudy says that he would appoint a Conservative judge to the Supreme Court, do you believe him? I ask because that is really the important aspect of abortion in the coming years and decades. For me, I am not sure whether to believe him or not. The jury is still out on that one for me.

Let’s make sure we don’t trade a RINO Rudy for a RINO McCain or a RINO Romney however.

Let’s make sure we get an honest to goodness, anti-evil conservative. I’ll take Duncan Hunter or Fred Thompson.

I guess the diffrerence would be if either party was still willing to shoot jihadis.

BE NOT MISLED-—WE’LL WIN WITH FRED.

Appointing a conservative judge would go against Rudy’s own beliefs. You see how flexible he is to adjusting his ideas of abortion, gun control, etc. to align with conservatives; he told us to take a hike. So, knowing that, how believable is it that he would appoint a justice who also goes against his own ideals?

As Ann Coulter says, it’s the Abortion Party. I agree with your post.

Just like every socialist movement since the Bolsheviks, the Democrats are degenerating into a death-cult.

A straw man, and false, argument. The GOP will not adopt abortion as its official policy and Giuliani will not recommend that it does.