News flash: Obama is "biracial," according to his top adviser on race issues, Harvard law professor Charles Ogletree, during an Oct. 25 panel discussion at Harvard on race and the 2008 election: http://www.archive.org/details/OgletreeSaysObamaIsbiracial

Ogletree's point is that because of pervasive racism which he expects will last decades, white America won't vote for blacks and other minority candidates. The expected heavy white vote for Obama doesn't disprove this thesis, Ogletree says, because Obama's not black; he's "biracial." So it looks like, according to Ogletree (and Obama?) that white America will have to do lots more for blacks after electing Obama to atone for past sins; it will get little if any credit for electing Obama.

If it wasn't already obvious, it's pretty clear which campaign is playing the race card: Obama's campaign keeps bringing up issues of race; McCain's campaign has not initiated any such discussion.

Note that Ogletree can't be dismissed as some fringe Obama kook like Jeremiah Wright. Ogletree's a tenured professor at Harvard Law School. According to the ABA Journal, Ogletree (who was a mentor during law school to both Barack and Michelle Obama) has a very good chance of being appointed as the top Department of Justice official in charge of civil rights enforcement in any Obama Administration: http://abajournal.com/magazine/the_lawyers_who_may_run_america_obama

Wondering whether this snippet was perhaps taken out of context? There's a full audio of the entire Harvard panel discussion here: http://www.archive.org/details/Oct.252008HarvardLawTownHallOnRaceAndThe2008Election

Other audio snippets from the program of possible interest:

1. Ogletree jokes about the mysterious disappearance of Jeremiah Wright until after the election; apparently, the Obama campaign forced him to call off his book tour, and into hiding: http://www.archive.org/details/CharlesOgletreeOnJeremiahWrightOct.252008

2. Ogletree says some voters view Barack Obama as white and others view him as black: http://www.archive.org/details/CharlesOgletreeOnObamaSeemingBothWhiteAndBlackOct.2520 08

3. More from Ogletree on his prediction that white racism will persist for many more decades: http://www.archive.org/details/OgletreeOnPersistentRacismOct.252008

5. Otunnu reflects on Obama's Muslim and Arab roots, and opines that the Muslim world will be quite happy with a U.S. president with an Arab name who's personally answered the morning call to prayer: http://www.archive.org/details/OttunuOnObamaMuslimAndArabRoots

6. Otunnu notes the oddity that a member of Kenya's Luo tribe may become president of the United States before one becomes president of Kenya, and that Obama had a better chance of becoming president of his country growing up in the U.S. than he would have growing up in Kenya (of which he was a citizen from birth): http://www.archive.org/details/OtunnuOnLuoTribeMemberBeingElectedPresidentOct.252008

7. Neal Chayet (Harvard Law, 1963) discusses the problem with the Bible-belt folks, particularly as to their "judgmental" nature -- I suppose the problem is they're bitter: http://www.archive.org/details/NealChayetOnTheProblemWithBible-beltFolks.

Welcome to FR today. No one here ever expected for “racism” claims to go away with an Obama election. In fact, I expect them to increase....everytime the 50% who didn’t vote for him speaks up.

His real parents are Mr Clean and Aunt Jemima

How dark would he have to be?

Some of us called this a while back.

See, America only voted for a biracial guy with an Ivy League education.

Only if Mr. DoggyDog wins will the racism end.

Predictable. And not surprising. The first post racial candidate (how quaint that sounds) will create more division than virtually anything else.

Now nobody needs to feel any pressure to vote for him.

Sure he is- He is half white and half Arab.

“Ogletree can’t be dismissed as some fringe Obama kook like Jeremiah Wright. Ogletree’s a tenured professor at Harvard Law School.”

If Obama were uni-Racial and white, he’d lose more states than Dukakis.

Ruh-rho. Your link doesn’t go to where it says it goes. It goes to archive.org streaming media. Could this be an equivocation?

I’m glad that’s cleared up. So, going forward, will any criticism of The One be considered bi-racism?

He may be biologically biracial, but didn’t he make a conscious choice in college to self identify as black?

Wasn’t going to help anyway that he will lose the election.....

Okay by me. Just need to tell all of his black supporters that he’s not black and they don’t have to vote for him. In fact, they can vote against the white half. 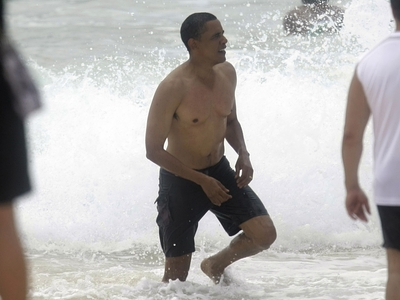 But by whatever standard is chosen, he probably does not meet the criteria by the black establishment.

He’s right. Obama’s election will only mean America is only half racist. We’ll be halfway there!