By PAUL BECKETT and VIBHUTI AGARWAL

NEW DELHI--In January, Indian Prime Minister Manmohan Singh handed over the reins of power to a deputy as he underwent heart bypass surgery. It seemed an apt metaphor for a leader struggling to deal with the aftermath of the November terrorist attacks in Mumbai and a rapidly slowing Indian economy.

On Saturday, however, Mr. Singh was firmly back in control as his Congress Party turned in a surprisingly big victory in national elections that were held over the past month. The triumph virtually assures Mr. Singh a return to the prime minister's residence at 7 Race Course Road in New Delhi, if, as expected, India's president invites Congress to form the next government in the world's largest democracy.

"Manmohan Singh will be our prime minister," said Sonia Gandhi, president of the Congress party, at a televised press conference with Mr. Singh. Mr. Singh, in typically low-key fashion, spoke at the same conference in such a quiet voice that his two minutes of remarks were inaudible over the din of the press corps and he was forced to return to the microphone to repeat them. "The public has expressed faith in Congress," he mumbled.

Analysts said the elderly and sober Mr. Singh and the young and more dynamic Rahul Gandhi, Ms. Gandhi's 38-year-old son, offered an appealing mix to voters at a time of economic uncertainty and amid widespread dissatisfaction with traditional politics here.

Mr. Singh, 76 years old, was an architect of India's economic reforms in 1991 that are credited with setting the nation on course for the economic boom it has enjoyed over the past few years but which is now slowing. He also is widely admired for his honesty in a system 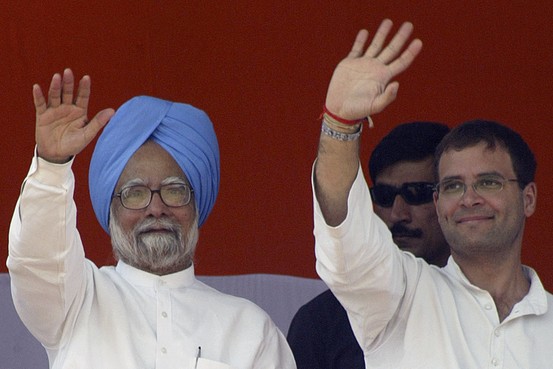 India's Prime Minister Manmohan Singh, left, and Rahul Gandhi wave to supporters during an election campaign rally in the northern Indian city of Amritsar May 11.

Is he a good guy? Pro-capitalist? (Can I singh his praises?)

He began India’s reforms and continued building strategic ties with the US and Israel, though he slowed on economic reforms because he need Communist support.

I don’t know myself, all I know is that he makes a mean curry.