Sorry, but Pelosi shouldn't be wasting too much of her time attacking opponents.

Sure, some of them are planted by the GOP just to kill the Democratic Party's attempts at reform.

But there also millions of Americans who have legitimate concerns about what's in the health care bills now circulating in Congress and how much proposed changes would cost.

By now, both Democrats and Republicans are rallying their supporters to come to town hall meetings held by congressional representatives.

Some of the usually deadly dull meetings are getting out of hand, as people shout at each other.

In the end, Pelosi and Hoyer may hope they can shut down some of this opposition by calling them out.

It isn't going to happen. Health care is a hot-button topic that will only get more controversial in the coming weeks as more details are discussed, both back home and in Washington. 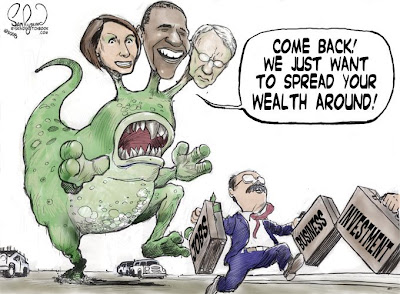 I just want to add my apologizes to all of those vermin groundhogs for the linkage and association with this scumbag. Sorry but the picture needs to say its 1,000 words.

2 posted on 08/10/2009 8:58:38 AM PDT by jws3sticks (Sarah Palin forever!)
[ Post Reply | Private Reply | To 1 | View Replies]
To: Oldeconomybuyer
The lies of the Obama administration and the DNC leadership are becoming more and more apparent...and as they do, they also become more and more shrill.

These people are drunk with power and control.

Their pronouncements and actions are like every other repressive, tin-horn regime in history. Label the opposition with exactly what they themselves are doing and then use the government controlled and co-opted press to spread that lies, and then use their thugs to try and enforce it and stamp out dissent.

Well, not any more in this country. The health care debate has blown the lid on it and it's time to carry it through on this issue and every other similiar issue (like Cap & Trade, FOCA, etc.) that these wanna-be tyrants propose.

President Barack Hussein Obama said on AUgust 7, 2009, that he expected the people who caused the financial and health care mess to be quiet, stand out of the way, and let it be fixed. Well, Mr. President, if you do not want the people who created this mess standing in the way of fixing it. Okay, then you, Mr. Obama...and Pelosi, Reid, Dodd, Frank, et all had best step out of the way yourselves because you not only helped engineer the problems that ensured the fiasco...you are now intent on making it immeasurably worse in your drive towards abject marxism.

In order to hide this, and in an effort to push their monstrosity Health Care, the liberal-left and Obama seem intent on turning the frustration and angst of the American people over his policies into something more akin to Iran over this issue, with their own Basij thugs sent out to silence us, and Obama supporters called on by the Whitehouse to report any dissent.

Despite all this, the American people are downloading the Dem Health Care Plan HERE and elsewhere and educating themselves.

They are also reading the cited quotes of the main architect of the plan and Chief Advisor to Obama on Health Care HERE and elsewhere, and seeing the context of the plan from the designer of it.

So, when Sarah Palin callis it evil, they know for themselves that she speaks the truth.

So they continue to take their feelings...and their own documentation...to their reps and gett in their faces about it.

OBAMA CARE BY THE NUMBERS

THE STORM UNLEASHED ON AMERICA

...and on the lighter side, take your mind off the Obamanation for a few minutes and enjoy some beautiful Western US scenery slideshows.

I read this as if she were in Kansas (not sure of her actual location). Again, a democrat in a state other than the one the represent.

When the democrats kill off all the old people with 0bamacare has Nancy thought for one minute that she will look even older and more of a hag than she does now? Nancy will be the only senior citizen left on earth. “Sure, some of them are planted by the GOP just to kill the Democratic Party’s attempts at reform.”

Could this “journalist” have made a more banal comment.

Yeah, the GOP just wants there to be no reform. To the GOP. “reform” is always bad. “Form” is a four letter word with “re” stuck on the front of it. The number one objective of the GOP is to quash reform. Reform, bad bad bad....What a putz.

Dems are the party of liars.

President Obama’s top priority for Congress is health care reform. Insurance companies are spending over a million dollars a day lobbying against the reform, while feeding myths and fears to America. It will take the same grassroots energy that got Obama elected to see the change we voted for. Our work isn’t over.

Build support for health care reform with U.S. PIRG. Mobilize activists to cut the cost of health care, expand coverage, and stop sick from getting dropped by insurance companies. Go out in your community and make change happen. Make friends and money along the way.

The Fund for the Public Interest has been working for over 25 years with organizations such as Sierra Club, Environment America, Human Rights Campaign, Progressive Future and U.S. PIRG to win concrete victories for the public interest. We are the nation’s premier nonprofit for raising money, building membership and winning grassroots campaigns.

* Location: Minneapolis
* Compensation: $400-$600 Per Week
* This is at a non-profit organization.
* Principals only. Recruiters, please don’t contact this job poster.
* Phone calls about this job are ok.
* Please do not contact job poster about other services, products or commercial interests.

So, when ordinary citizens happen to come together with their concerns, they are “paid by the insurance lobby”.

But when liberals openly advertise that they will pay people to “counter the (so-called) lies”, this is community organizing at work.

Black is white and white is black if Big Brother says so, eh?

But when liberals openly advertise that they will pay people to “counter the (so-called) lies”, this is community organizing at work.

Black is white and white is black if Big Brother says so, eh?

You understand what's going on - something the paid professionals in the MSM have yet to figure out... and our press is too stupid to "get it" or they're in on it...

That picture of Witch Nasty Pelousy must be an old one. Her skin is now so tightly stretched, she has a perpetual “deer in the headlights” look.

I wish someone would run against this monster AND WIN!