Underage, underpaid workers working 15-hour shifts, sexually predatory security guards, hourly pay of just 52 cents per hour after deductions for the canteen food. No talking during work hours, no listening to music, no bathroom breaks. These are just some of the conditions that workers at China's KYE Systems Corp. plant in Dongguan City have to endure. The factory produces hardware for U.S. companies, including Microsoft, and its work practices have been documented in a report by the National Labor Committee. What would the directors of the Bill and Melinda Gates Foundation say to all this?

The report is the product of a three-year-covert investigation by the NLC, a collective of 22,000 individuals and organizations dedicated to helping "defend the human rights of workers in the global economy." Its director, Charles Kernaghan, is the man who famously exposed the fact in 1996 that Kathie Lee's clothing line for Walmart was made in Honduran sweat shops (he's also taken on Kmart, Gap, Target, Nike, and many more for similar workers' and human rights issues).

In his latest report, there are some truly spine-chilling first-person accounts of factory life. And it is a life. Workers are billeted, 14 to a dorm, in the compound. If they don't supply their own mattresses and bedclothes, they sleep on plywood boards. They are permitted three days off each month. The air-conditioning is only turned on when foreigners visit the factory, and when the workers meet their targets, the management immediately raises them.

"Without a doubt, one of the most disappointing things was that one of the workers who had been in a factory for a while just said that the young people in this factory, they have no chance to grow or develop--not emotionally, not intellectually," Kernaghan tells FastCompany.com. "They're being destroyed."

One of the workers agreed to be interviewed for the report. Some of his quotes are below.

* "The manager shouted: Everybody pay attention, while at work, everyone should be full of vigor. Everyone must strictly follow the 6S system! [Sorting, Straightening, Sweeping, Standardizing, Sustaining discipline, Safety] You are not allowed to talk at work. You cannot drop products on the floor. Can you hear me?" We respond, "We hear you! but some of my colleagues didn't answer with much enthusiasm."

* "The foreman then calls out commands for workers to: Stand at attention! Turn right!" and sums up the day's work. One worker who accidentally dropped a product on the ground is called out and scolded by name. Finally the foreman says we can leave. At that time, we only have half an hour before the overtime shift begins."

* "This factory has a stupid regulation that doesn't allow anybody to enter or reenter the factory compound after 9 p.m. When workers finish overtime, it is already 10 p.m., and if they leave the factory, they cannot come back in. Most workers live in the company dorm, so they don't dare risk getting stuck outside. This regulation was crafted to force workers to rest in the dorms and it guarantees workers' performance the next day."

Cynics would say that the NLC report is nothing surprising--and that this is the third time that a factory in mainland China with links to Microsoft has been investigated. Last year, Swedish NGO the Fair Trade Center found similar conditions in a quartet of plants that supply tech firms including the software giant, and the NLC has already sniffed out dodgy working practices at a keyboard factory where Lenovo, Microsoft, and HP do business. Let's not forget the Foxconn plant, either, where Apple's iPads are made.

It is a given that consumers want cheap tech. But at this price? As well as Microsoft, Hewlett Packard, Samsung, Foxconn, Acer, Logitech, and Asus use KYE Systems Corp. for production. Basic wages for the workers are around $112 per month--without overtime--and it only thanks to cheap labor and overheads that allow $300 netbooks to make their way into U.S. stores. It is not that there are no labor laws in China, it is that large factories such as KYE flout the regulations: Its workers' average of 28 hours of overtime each week exceeds the limit by 237%.

Microsoft has already responded to the report, and has promised an investigation into the treatment of its workers. "We take these claims seriously, and we will take appropriate remedial measures in regard to any findings of vendor misconduct. Actions for non-compliance with our requirements may include corrective action plans, remedial training, certification requirements, cessation of further business awards until corrective actions are instituted, and termination of the business relationship." >>What would the directors of the Bill and Melinda Gates Foundation say to all this?
***

“Keep working! Who told you yellow brats to slack off??”

Seriously, I wonder what four-star on the Chinese PLA General Staff has his beak getting wet in this particular racket.

I wonder how many workers are treated like these in China ( even as I buy my cheap China-made items from Wal-Mart ).

I dont know...lemme think about that while I buy my $1 alarm clock.

News for the uninformed: China is still run by Communists.

This guy who also did the Kathy Lee sweatshop expose' is a real winner. Once Kathy Lee moved her line out of the shop in question, the dude bitched about the fact the former shop now had no work.

Forward this to Bill, I’m sure he can straighten out the situation that has arisen without his knowledge and/or consent!
Bill and Melinda run a foundation to help people, not exploit people!
Bill is a business genius, who would never do anything less than honorable to make a buck!
If he where doing anything to oppress people, Obama and his Justice Department would be on his butt like white on rice!
Just because I made lots of money on MS stock doesn’t mean I would sellout either.

Obastard is creaming in his pants. He reported $1.6 MILLION in dividends from foreign investments, probably in this company.

Yup. Communism is still the political system even thought capitalism has become a big part of the economic system. Not to excuse bad behavior, but Chinese manufacturing fueled by capitalism has enabled millions of poor rural Chinese to rise above the subsistence existence they had under Communism.
Just consider how harsh life would be for these workers if there had not been a manufacturing revolution in China. 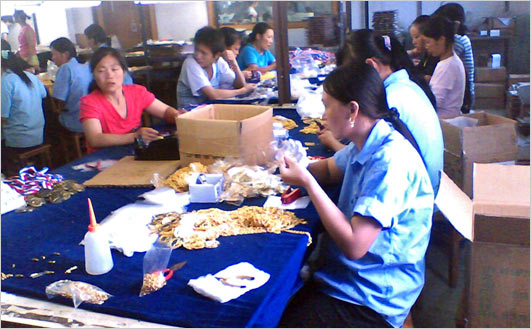 HOW can they NOT have a bathroom break???

Actually MS is already addressing this, which this article very notoriously declined to address. EIther way if you think it is just MS and their products that is dealing with these type of issues in China then I have a gold bar to sell to you for .50 cents, its real I promise.

16 posted on 04/15/2010 8:20:36 PM PDT by aft_lizard (Barack Obama is Hugo Chavez's poodle.)
[ Post Reply | Private Reply | To 10 | View Replies]
To: aft_lizard
” ... if you think it is just MS and their products that is dealing with these type of issues in China ... “
Since when does “everyone else is doing it” have any moral weight?
MS is a predatory enterprise, as are many other corporations (who have sold out American worker interests - even thought they where granted the legal privilege to exist by US government authority via their incorporation and grant to conduct business. Of course, the government is the final repository or responsibility, since it could legally revoke the privilege to conduct business!

Apple is too then, unless you missed the numerous exposes of their over seas factories that involves things such as murder of employees to keep secrets.