The House Financial Services Committee voted Wednesday to launch an investigation of the ShoreBank bailout, a scandal that was first revealed here at BigGovernment.com. Of the dozens of banks that have failed this year, only ShoreBank received help from Washington and Wall Street.

The reasons: its connections to the White House, its close relationship with Rep. Jan Schakowsky (D-IL), and its importance to the radical left.

After I broke the story in January, other bloggers, notably the Central Illinois 9/12 project, connected more of the dots. Soon, the Wall Street Journal, the Chicago Tribune, and even the New York Times began following the story.

Two weeks ago, my campaign joined Rev. Isaac Hayes (who is challenging Jesse Jackson, Jr. in IL-2) and the Illinois Tea Party in a spirited protest outside ShoreBank’s offices on LaSalle Street in downtown Chicago.

Representatives Judy Biggert (R-IL) and Darrell Issa (R-CA) took up the cause and demanded answers about the White House’s role.

Suddenly, the Treasury and the Federal Reserve began backing away from the bailout. That triggered a public attack on Treasury secretary Tim Geithner by the Illinois Finance Authority. Finally, Rep. Biggert succeeded in inserting an investigation of ShoreBank into the financial reform bill.

The financial reform bill is still a job-killer. But if it does pass, the consolation is that Congress will investigate the ShoreBank bailout.

The fact that a bipartisan committee managed to agree on the investigation shows how important the allegations are.

Meanwhile, the ShoreBank bailout is still on hold.

Thanks to bloggers, the much-maligned Tea Party, and bold leadership on Capitol Hill, we have stopped a corrupt bailout, against overwhelming odds!

Schakowsky, wife of convicted felon, Robert Creamer, who designed Obamadeathcare while in prison. 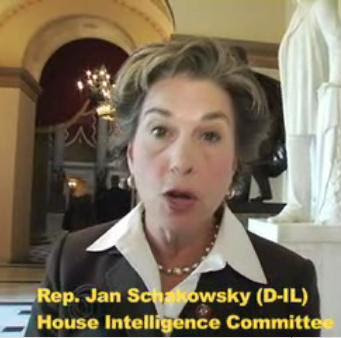 Who is Robert Creamer?

It looks like 3 hots and a cot for you!

This must be a slam dunk if Judy Biggert stepped forward to push for an investigation....

Hi Star! I saw Glenn Beck’s show covering the Shore Bank “connections”. Some believe Glenn is ‘too much’ or ‘too negative’ but he sure does a great job of connecting the dots using FACTS.

By Paul Merrion
June 25, 2010
(Crain’s) — ShoreBank Corp. won a reprieve from a potentially crippling federal investigation of alleged Obama administration pressure on some of the nation’s biggest banks to invest in the ailing South Side financial institution.

Before finishing the massive Wall Street reform bill early this morning, Senate negotiators killed a provision that would have required the inspector general of the Federal Deposit Insurance Corp. to examine all bank bailout deals since January 2009 for political pressure by the executive branch.