Instead, the company will direct retirees to Medicare-backed insurance programs, and will provide reimbursement for that coverage. It'll also reimburse retirees who are too young for Medicare; the company didn't provide further details.

The company made the changes known in a memo to employees Friday; news of the move was reported in The Wall Street Journal and confirmed Monday by 3M spokeswoman Jackie Berry.

In its memo, the company said the new health-reform act would create new opportunities for people in their 50s and 60s to find affordable insurance.

Maplewood-based 3M (NYSE: MMM) is one of the first large companies to indicate that it won't tap a large federal-government reimbursement program created by Congress as part of the health insurance reform package, The Wall Street Journal reported. The rebate program was meant to encourage employers to keep in place their health-insurance plans for retirees.

3M said the new policy will begin in 2013 for retirees who are 65 and older and qualify for Medicare. Non-Medicare eligible retirees and their dependents will join the program in 2015.

3M noted that these changes affect current and future retirees of 3M, regardless of their retirement date.

The new policy is likely to save 3M money because it reduces the risk to the manufacturer for rising medical costs, according to a University of Minnesota professor interviewed Monday by Minnesota Public Radio.

Umm... 3M is discharging retiree med care to Medicare and Medicare is going to pick up the tab for the coverage? Is it just me, or is that just completely ass backwards?

This could put retirees in a bit of a jam considering that Doctors are dropping their medicare practices left and right.

Most companies dumped their retirees on Medicare years ago.

The few that didn’t, did it when Bush rolled out the Prescription coverage.

I’m curious if Obamacare was somehow an added impetus for this move, or whether 3M was just behind the ball.

Gee, who saw this coming?

Oh, thats right. Conservatives did. Everything we said would happen is.

Maybe you can keep your plan, the plan won’t keep you.

Watch for Kathleen Sebelius to threaten to put the upper management of 3M in prison for this.

So 3M is paying them to go on Medicare? I didn’t read it that way, but it makes more sense.

Then again, we live in upside-down bizarro world now, so “sense” is definitely something at a premium right now.

I know some folks that are getting dropped also...I think their’s was with Whirlpool. Whirlpool will give them a small stipend (something like 50 bucks per month) to pick up a secondary in addition to their Medicare.

Why would she do that? It is exactly what Obama and his ilk want! Destroy private health care insurance so that the Government will be ‘forced’ to implement the SINGLE PAYER plan, like it always intended.

"Let me be clear, When I say if you have your plan and you like it, or you have a doctor and you like your doctor, that you don't have to change plans, what I'm saying is the government is not going to make you change plans under health reform."

“Nobody will lose or have to change their current coverage”.

15 posted on 10/05/2010 9:01:53 AM PDT by Old Retired Army Guy (tHE)
[ Post Reply | Private Reply | To 1 | View Replies]
To: Qbert; ding_dong_daddy_from_dumas; stephenjohnbanker; DoughtyOne; dools0007world; Gilbo_3; ...
RE :”3M Co., citing new federal health laws, said Monday it won't cover retirees with its corporate health-insurance plan starting in 2013. Instead, the company will direct retirees to Medicare-backed insurance programs, and will provide reimbursement for that coverage. It'll also reimburse retirees who are too young for Medicare; the company didn't provide further details. “

Considering Medicare is currently running a deficit, and the Obama deficit commission (and maybe some Republicans) want to cut this benefit for some retirees for the deficit, this does not sound like a good development. 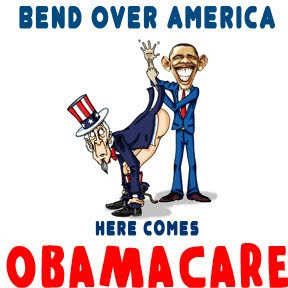 17 posted on 10/05/2010 9:02:55 AM PDT by facedodge (Nothing is so permanent as a temporary government program. ~Friedman)
[ Post Reply | Private Reply | To 1 | View Replies]
To: dawn53
“In its memo, the company said the new health-reform act would create new opportunities for people in their 50s and 60s to find affordable insurance.”

Just like the pink slip is “new opportunities to find a better job”. I always look forward to taking an entry level job when I'm 55. Just redistributin da wealth.

No, this story can’tbe true. President Obama said anyone who liked their plan could keep it.