As victims of the House Democratic election massacre speak out about what caused their ouster last November, they are pointing their fingers squarely at a Washington duo: Nancy Pelosi and Barack Obama.

Then-House Speaker Nancy Pelosi (D-Calif.) moved their party’s agenda too far left during the past Congress. And then they failed to help rescue the party’s mostly supportive lawmakers, two defeated first-termers who have joined Washington-based think tanks said Tuesday.

“Moderates and independents who leaned toward Obama didn’t come out because they saw a continuing polarization. Health reform was only supported by Democrats. So, the message from Washington was that Obama was getting his way,” said former Rep. Dan Maffei (D-N.Y.), who has become a senior fellow with Third Way, the centrist Democratic group.

Party leaders and liberal allies told him that he was too pessimistic last fall when he warned them that he was in danger of losing. Obama and Pelosi “couldn’t bring themselves to believe that it would be this bad,” said Maffei, who unsuccessfully sought a late campaign stop by Obama. “Low turnout was why I lost. My opponent [Republican Ann Marie Buerkle] was seen as fringe and votes didn’t think she could win.” He lost by about 650 votes.

Former Rep. Glenn Nye (D-Va.) blamed Pelosi’s liberal agenda for his more decisive 10-point loss. “A winning political strategy is to take issues that are popular with the center. Democratic leadership brought too many votes that weren’t going to be enacted. It was a ‘choose and lose’ approach,” said Nye, now a senior fellow with the German Marshall Fund.

All Dems are losers & some still support her.

Excellent! They should be blaming Obama...he’s the chief rat.

As well they should.

By any reasonable or measurable standard, Nancy Pelosi, as a leader, was a colossal failure. She was great at one thing though, creating jobs for Republican lawmakers. :-)

Actual sign on the offices of the Republican National Committee HQ, in Washington D.C. after the 2010 election, but before Pelosi was chosen as minority leader. The previous sign, during the 2010 campaign had been: 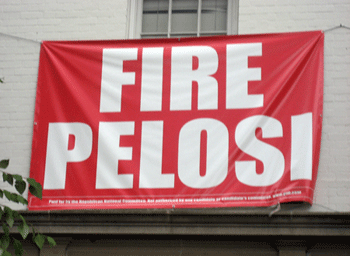 You mean it’s not Bush’s fault??

How many of these guys voted against Pelosi for Speaker? None, I’ll wager.

How many of them voted against Obamacare — and voted to support the “no money for abortions” language? (You know: The amendment on which Bart Stupak sold his soul for an instantly-reversible “Executive Order.”)

you really thought Obambi and Pelosi cared about you? NOT

Who knows, Jon Boehner might give it back to her.

We must defend Nancy and Barack against these vicious attacks. They are our biggest weapons. In two more years we'll have both the House and the Senate and probably the Presidency. Thank you Nancy, Harry and Barack. Thank you. Thank you.

They all blam Pelosi. That’s why they all voted for her to be Minority leader.

Give me a break here ,they all followed her over the cliff, they have no one to blame but hemselves.

They still elected her to minority leader...